She will be sentenced tomorrow

Multiple bruises found on the British 19-year-old in the Ayia Napa gang rape case have been dismissed as jellyfish stings by a judge.

Forensic pathologist Dr  Marios Matsakis examined the 35 bruises across the woman’s eyes, bottom, knees and upper legs and has said the injuries are “consistent with rape. Anybody who has any medical experience can see they are not jellyfish stings.”

However the court heard from state pathologist Sophocles Sophocleous the British teenager bore no physical signs consistent with a serious sexual assault. The judge Michalis Papathanasiou has ruled the teen got them from going in the sea. 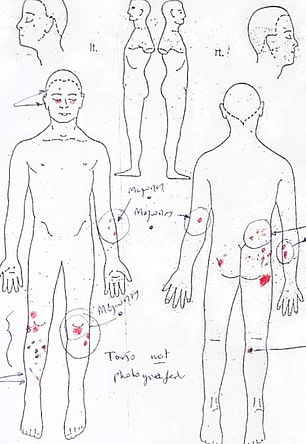 There were no bruises recorded on her chest as police did not take pictures of her with her shirt off.

Pictures of her chest could have been crucial to the verdict as a central part of her testimony the girl stated she had been pinned down by her shoulders.

The teen has been found guilty of lying of gang rape, after alleging she was raped by up to 12 Israeli men in Ayia Napa in a hotel room last year.

Last week she was convicted of public mischief and after the sentencing tomorrow she could face a year in jail.

Foreign Secretary Dominic Raab has voiced ‘serious concerns’ over the sentencing. He has spoken to the girl’s mother and his priority is to get her back to the UK to start her recovery.

The girl’s psychologist, Dr Christine Tizzard, has also stated she is a “suicide risk” if she is jailed this week. The British woman’s psychologist says she is a ‘suicide risk’

The 12 men in the alleged assault were initially arrested but soon released without being charged and allowed to return home.

It was reported seven of the men popped champagne and chanted “the Brit is a whore” when they returned in the airport.

One of the teens, Yona Golub, in an interview with the Mail on Sunday said he is: “preparing to sue her.” He added: “She deserves to go to jail.”

Yona Golub expressed no sympathy for the British teen and said: “We deserve compensation for what we went through. I don’t know how much I should get.

“They need to put her in prison and only afterwards should they deal with the compensation.”

Golub stated he was not in the room with the teenager and was in a different room of the hotel with his girlfriend.

His girlfriend showed police a selfie they took of them that was taken when the alleged rape was taking place. Golub was then released and was not one of the seven men pictured celebrating at the airport.

Police found no evidence against him after using DNA swabs.

The British teen will be sentenced tomorrow.