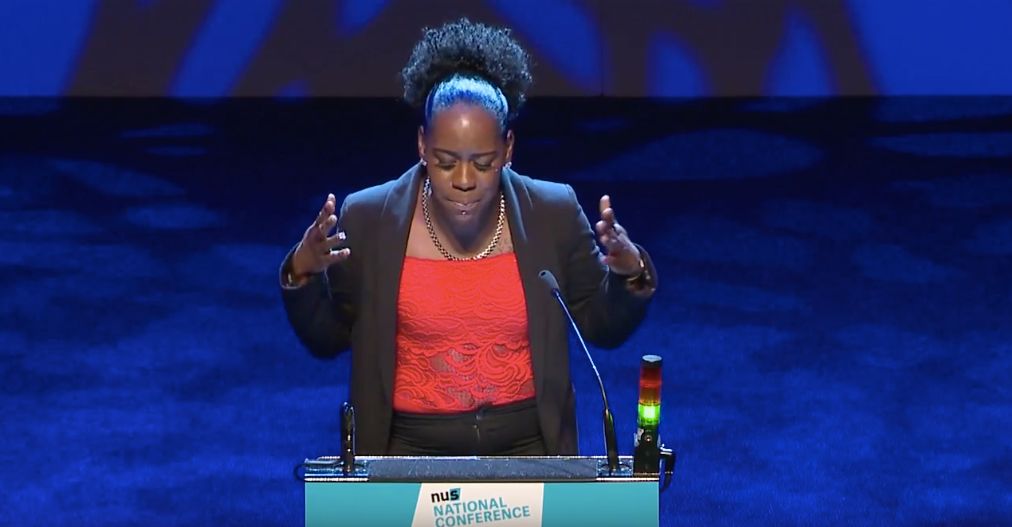 The NUS President Shakira Martin has called her role a "joke" and an "awful job" in a Facebook rant.

In the now-deleted post, Shakira claimed she "couldn't give 2 shits" after several Students' Unions submitted motions to remove her.

She asks those who submitted motions to, "in the most professional way possible, FUCK OFF!!"

Only the second NUS President not to have gone to uni, mother-of-two Martin has been outspoken throughout her two years in office.

The post shows her frustration with the role, and the difficulty of balancing it, saying her critics will be "lucky if I even turn up for conference at this rate". 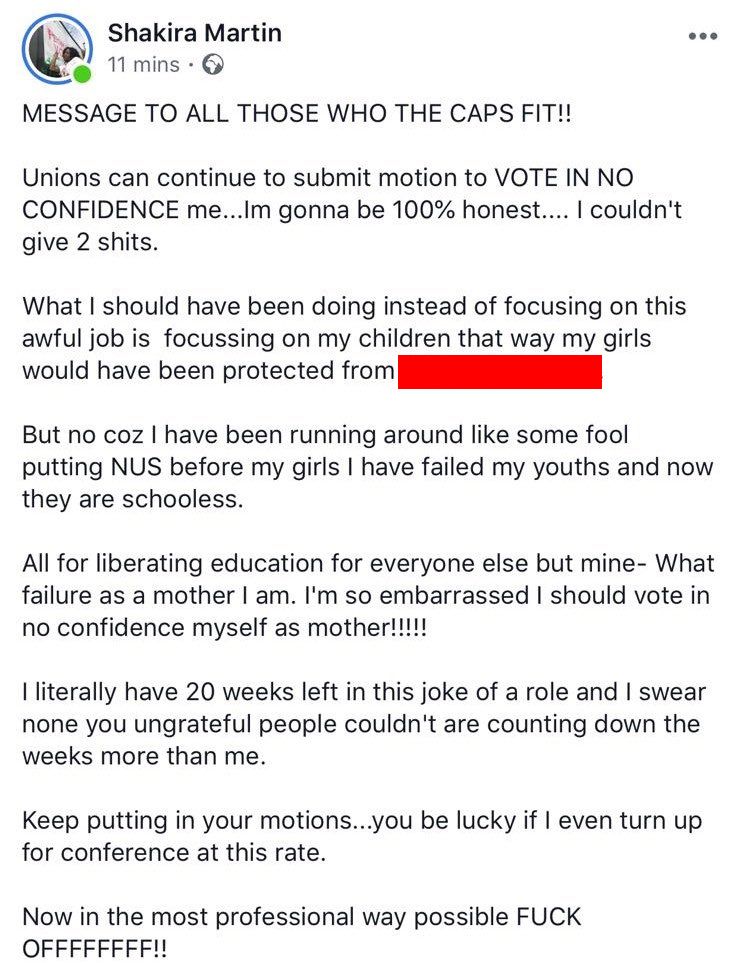 A part of the status has been redacted for confidentiality reasons

Several efforts have been made by Student Unions to remove her from her post. The NUS Trans Conference, a two day conference from the 30th to the 31st January, voted for a motion of no confidence in her.

On the 18th November, The Student Left Network and Socialist Feminist Campus Collective campaigned for a vote of no confidence.

The post, addressed to those submitting no confidence votes and talking about the struggles of juggling the NUS role with looking after her children, reads: "MESSAGE TO ALL THOSE WHO THE CAPS FIT!!

"Unions can continue to submit motion to VOTE IN NO CONFIDENCE me…Im gonna be 100% honest…. I couldn’t give 2 shits.

"What I should have been doing instead of focusing on this awful job is focussing on my children that way my girls would have been protected.

"But no coz I have been running around like some fool putting NUS before my girls I have failed my youths and now they are schooless.

"All for liberating education for everyone else but mine- What failure as a mother I am. I’m so embarrassed I should vote in no confidence myself as mother!!!!!

"I literally have 20 weeks left in this joke of a role and I swear none of you ungrateful people couldn’t are counting down the weeks more than me.

"Keep putting in your motions…you be lucky if I even turn up for conference at this rate.

"Now in the most professional way possible FUCK OFFFFFFFF!!"

Leaked documents revealed in November suggests that the NUS are on the brink of bankruptcy, after witnessing a deficit of £3million at the end of 2018. Turnaround meetings have been held to avoid the Union potentially going bankrupt in the spring.

As part of the cost-cutting measures to save the NUS, Shakira came under fire for proposing to defund a campaign to protect and represent the needs of transgender students, as well the removing the Union's liberation officers, who represents BME, LGBTQIA+, disabled, and female students.

Claims of abuse within the NUS senior team ruffled Shakira's public image at the start of 2018. Accused of bullying and intimidating fellow officers at the NUS's HQ, Martin said she was a victim of "racism and classism" and denied the allegations.

Shakira's "joke of a role", as she proclaimed in her Facebook post, ends in 20 weeks, as a new electoral campaign is ramping up to nominate students to the role of President of the largest union of students in UK.