There were 15 accounts posting the same fake stories

If you're a member of your uni's Overheard group, you will be used to students posting funny stories in there or asking for help. You might have tagged your mates, or told someone about them.

Except, a Tab investigation can reveal, these stories didn't happen at your university, and are being posted across all Overheard Uni groups by a company who run a festival.

In November last year, an employee of Overheard posted in the Manchester group claiming someone had pooed on his car windscreen, saying: "If you know the culprit please tag them."

This actually happened to a female student in Swansea, as reported by The Mirror and The Sun. The Overheard employee stole a photo from the real news story, and posed it in Manchester's and Bournemouth's groups, claiming they were the owner of the car and it had happened to him. 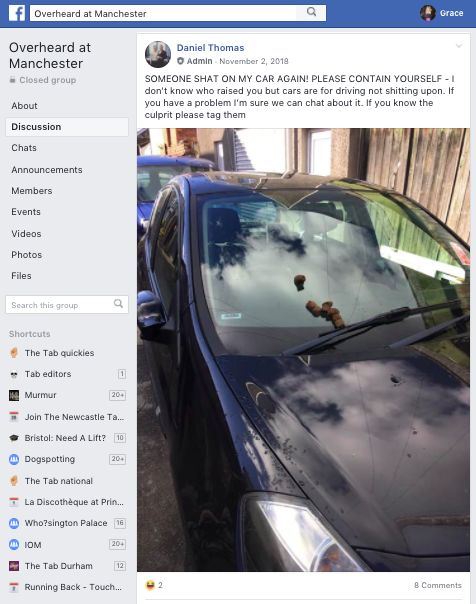 The Facebook groups are run by "Overheard", who call themselves the “UK's biggest university network” and say they connect over half a million students across 140 groups. The description of the groups describes the content as "photos, observations & funnies overheard around your turf and posted by you."

The Overheard network is an offshoot of Mega Events Ltd. This company runs two festivals: Spring Break Amsterdam and Budafest. At the time of writing Mega Events' website is under construction.

We found 15 different Facebook profiles posting these stories and more than 12 of exactly the same posts copied and pasted across multiple pages. These included:

• A person complaining someone has taken a poo on their doorstep, claiming to the be the occupant of the house

• A post asking for students to apply to take part in a naked calendar, which was never made

The privacy policy on Overheard’s website describes it as the trading name of Mega Events/Travel/Music. Up until August 2017, Mega Events as a company was called Spring Break Amsterdam, and the website for the festival gives both its address and copyright as Mega Events.

Alongside Facebook groups, the Overheard company offers student discounts and access to group chats if you send them your details – which they and their partners will “only use for: Marketing communications, market research and analysis, aggregation, profiling, identity verification, database verification and tracing activities, segmentation and suppression.” Overheard says they are "not run for profit".

A post naming Spring Break Amsterdam as 'sponsors' of Overheard

When we contacted Overheard, they told us the posts are "obviously satire", and they'll take any confusion on board for future.

The fake viral posts, they say, are either submitted by students, or are interesting and funny. They keep the groups engaged. Below are the posts with most Facebook tags:

Cal, Maxx, Nadia, et al wanted to “bring back” an annual naked calendar, which were “all the rage back in the day”.

The post clarifies: “There would be no cracks, sacks or nips e.g. a sports team would have balls in tactical places, a chess team would use chess pieces to conceal all etc etc”.

The post has 217 comments on Exeter, but was also posted to King’s and Aberystwyth.

The wording in these is identical to a post from March last year which was a genuine call-out posted by Durham’s Charity Committee. This was posted in Overheard at Durham Uni, which isn’t part of the “Overheard” network. 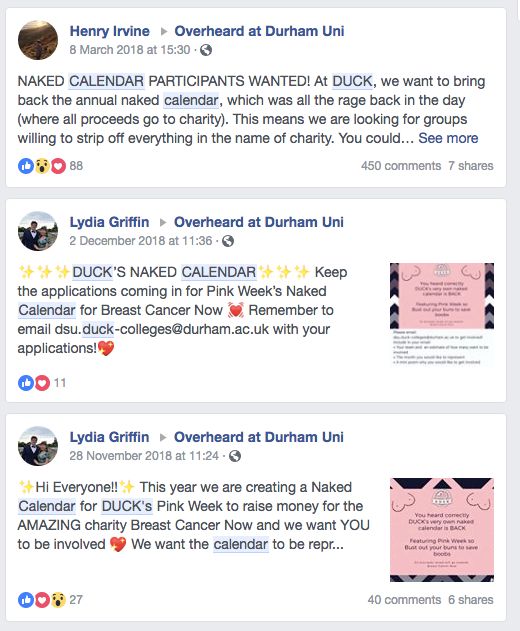 We spoke to the committee, who called it “creepy”. They said: “These are exact copies of our original posts and we did not share these in any other groups. Unfortunately, due to our annual changeover, that calendar was never printed and any photos taken were appropriately rid of. "

When Tab reporters enquired about the naked calendar, they were told the list was full, and no more sign-ups were being taken. In a statement to The Tab, Overheard told us submissions were never asked for and none were received.

Another Tab reporter messaged the people who posted about the naked calendar over Facebook, saying he had concerns about the calendar being fake. He got no reply and was kicked out of the Overheard groups he was in.

The shit on the doorstep

This is a picture of some partially trodden-on poo in front of someone’s front door. It is unclear which city it is taken in. The post says they want the “inconsiderate” culprit to come and clean it up themselves. On Exeter, the post has 288 likes and 121 comments, all of them tagging a mate. The same turd also wound up on King’s and Coventry. 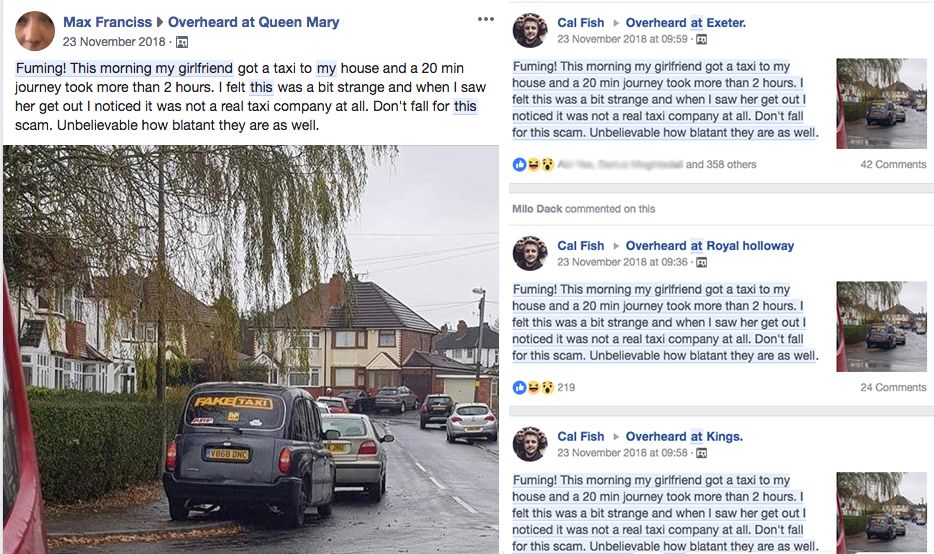 Cal (or Max, or Jamie, depending on which one you read) – says his girlfriend got a ride with a “Fake Taxi’ to his house and a “20 minute journey took more than two hours.” According to the posts, the taxi appeared in groups for Birmingham, KCL (London), Royal Holloway (Egham), Queen Mary (London) despite the photo showing exactly the same street.

Third year Royal Holloway student, Lizzie, told The Tab: "I know fake taxi isn’t real, but I’d heard about the one going round in Coventry so when I saw it in the Royal Holloway group I thought it was a real fake Fake Taxi in Egham." 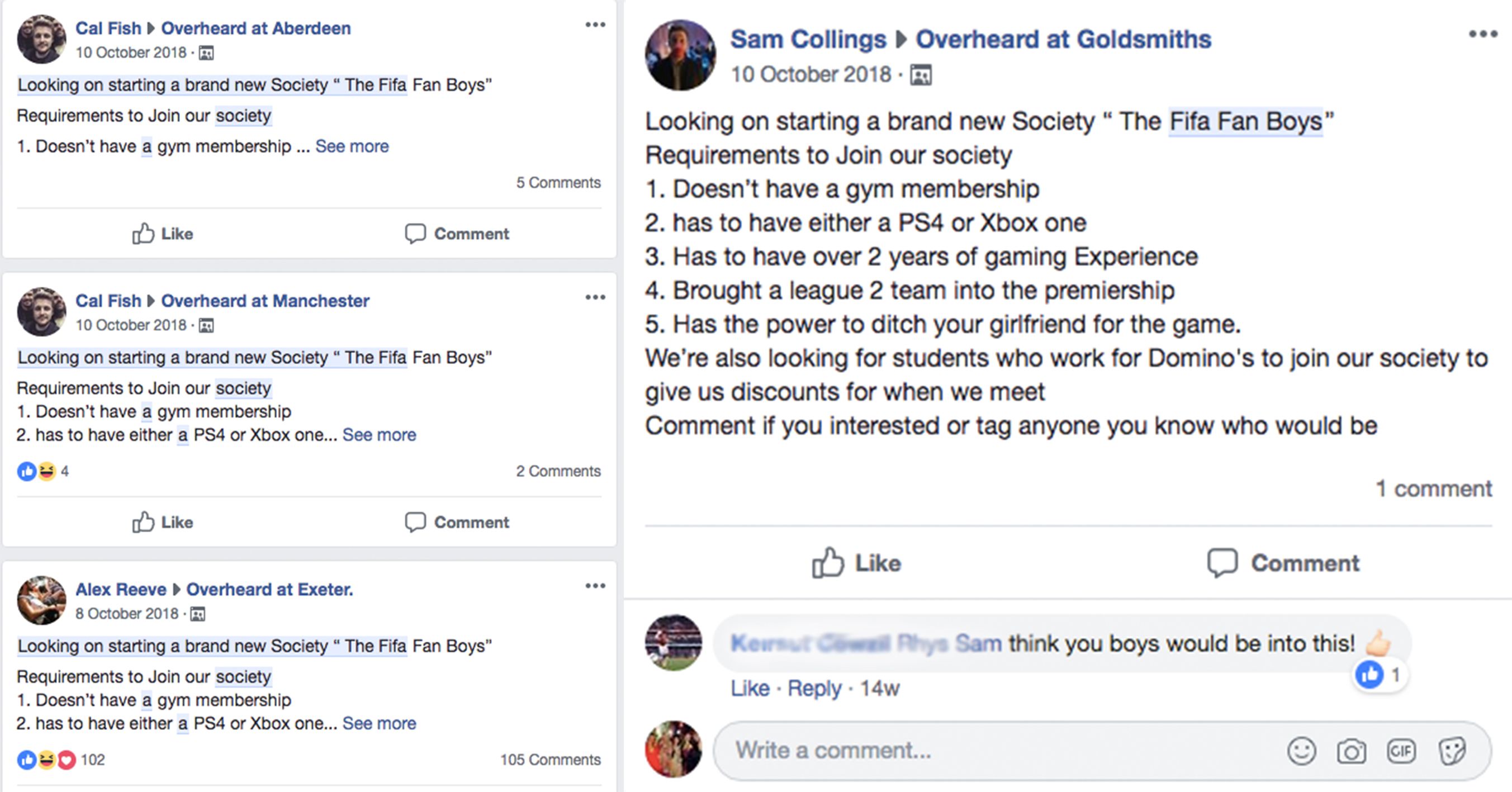 This proposal for "a band new society" of "FIFA Fan Boys" required potential members who didn't have a gym membership, but did have a PS4 or XBox One, as well as "over two years of gaming experience." The posts also said they were "looking for students who work for Domino's to join our society to give us discounts where we meet." 105 comments on Exeter.

‘Anyone free to go on holiday with me?’

Both Bella and Jamie promised to take a student on an all expenses trip to Florida, including “£500 in spending cash.” Jamie wanted “a relaxing lads trip”, Bella a “relaxing girls trip” – other than that, their posts on Exeter, King’s, and Coventry read the same. Across those three they attracted over 100 comments.

This one offers to pay couples £30 (15 quid each) to take part in a “physiology” experiment. When one of our reporters asked over Facebook if they could get involved he was ignored. On Brookes this post has 183 comments.

The phones found in the club

This is a picture of a shattered phone screen with a message from “mum” saying she’s “sick to bastard death” of the owner for taking a sausage from Gary’s plate. There’s also a text from Gary. It has 61 likes on Aberdeen and was also seen in Liverpool and Royal Holloway.

Obviously the same phone wasn’t found in all these cities. In fact, the picture dates back to 2017, where it can be found on the “r/badfaketexts” section of Reddit.

Other popular posts include a picture of a bum on a scanner ("tag the culprit") and an open appeal "to the housemate who walks round with his top off".

Andrey, a Nottingham student who got into a debate underneath one of these posts, told The Tab: "I feel like some stories on these groups are just for attention, something students will laugh at. But then again so much shit happens in Nottingham – it's hard to tell when people lie. I thought it was real."

A spokesperson told us: "Overheard shares satirical content between groups that has been submitted to us by students, or which it believes people will be interested in or find funny.

"Some of this is clearly tongue-in-cheek, whether shared by us or students at the uni. Much like any social media outlet, content keeps the groups busy and active and hopefully provides students with a mutual social hub with which to engage with fellow students every day.

"Our content is not designed to be misleading. The example given concerning a ‘naked calendar’ was purely satirical in nature and to be clear, we did not ask for submissions, nor were any given. If feedback is that some group members are confused about the nature of certain posts, then of course, we will take this on board for the future.

"The Overheard network is used by Spring Break Amsterdam when it is recruiting staff offering some great opportunities to group members, however Overheard is completely independent and is not run for profit."

In an email to The Tab, Mega Events' director Nathan Reed said it would be a "problem" if anybody thought the posts were real, but not one they've ever encountered before. To even suggest anybody could think the posts were real would be "an insult to their intelligence". However, he pointed out that people tagged in the posts were "unsuspecting".

He told The Tab: "The naked calendar was satire… The original post is clearly in line with many other satirical posts within the Overheard network, including the yearly ‘Big Name On Campus Award’, the 'boyfriend/girlfriend application', humorous lost property, the 'hottest ginger on campus calendar', and many others.

"They are designed to be funny and are always received in jest by our audience who use them to tag unsuspecting friends. We have never come across a problem where students have confused this type of posting as ‘fact’ and frankly, to insinuate that there are group members who believe these to be real is an insult to their intelligence."