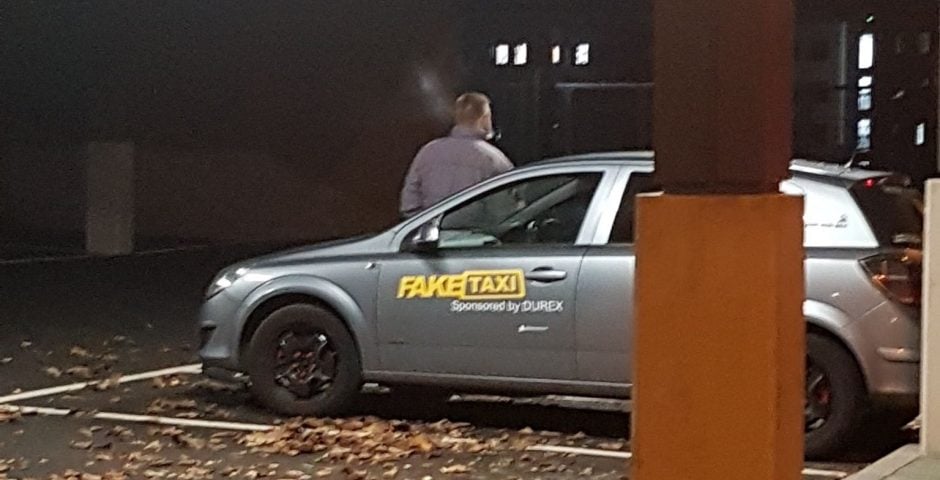 Coventry University has issued a warning to students urging them not to get in the “Fake Taxi” that’s been spotted around Coventry.

West Midlands Police have confirmed they are aware of the "Fake Taxi" and have spoken to the driver.

Since The Coventry Tab first reported the presence of the “Fake Taxi” a month ago, we have been investigating the car, which has been spotted outside Kasbah, to find out who the driver is and exactly what he is doing. 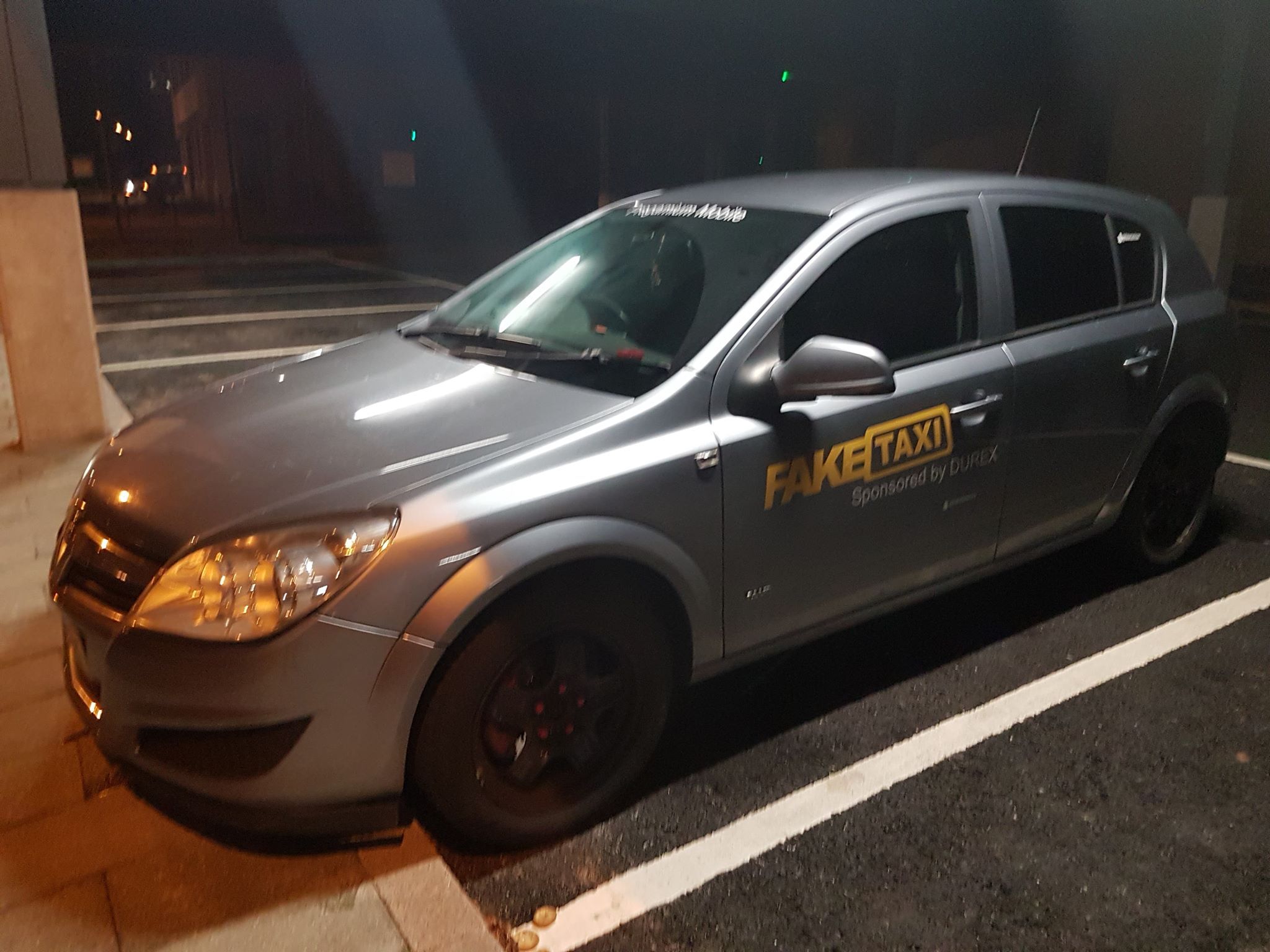 The 'Fake Taxi' outside Kasbah

On two separate occasions, our journalists have approached the driver. The first time when asked what he was doing, the driver replied: "What do you think I'm doing?"

The second time the car was stationed outside Lancaster Library. When questioned, he said: "I am just waiting for a friend".

The driver denied being an official representative of the Fake Taxi company but insisted he had contacted the brand on Twitter in the hopes of "making it real".

When asked if he was offering girls money in return for taking part in making a "Fake Taxi" video, he said he would refuse women expecting to get paid for their time. When asked if women could do it for free, he said: "Why not?" 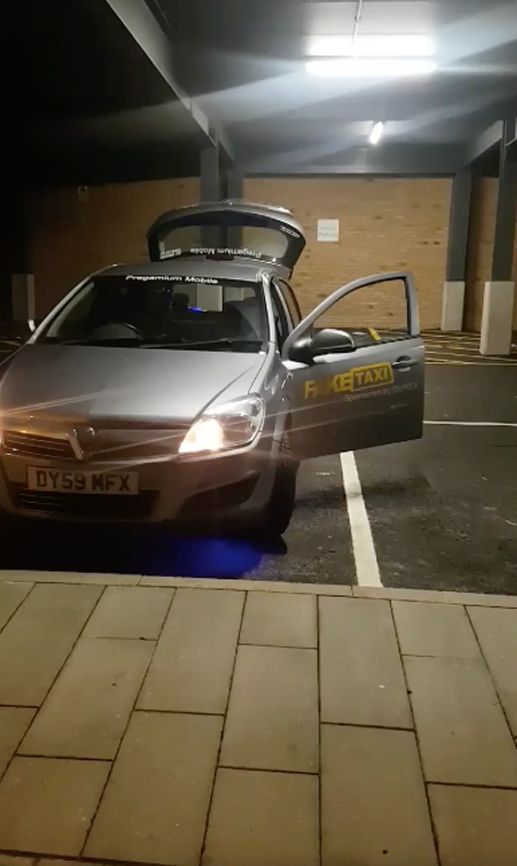 The car was also parked outside the library

The car, a silver Vauxhall Astra (licence plate: DY59 MFX), sports a "Fake Taxi" sticker and claims to be sponsored by Durex. The driver also has Tinder and Snapchat accounts for the car, both of which The Coventry Tab used to speak to him to find out what he was doing. 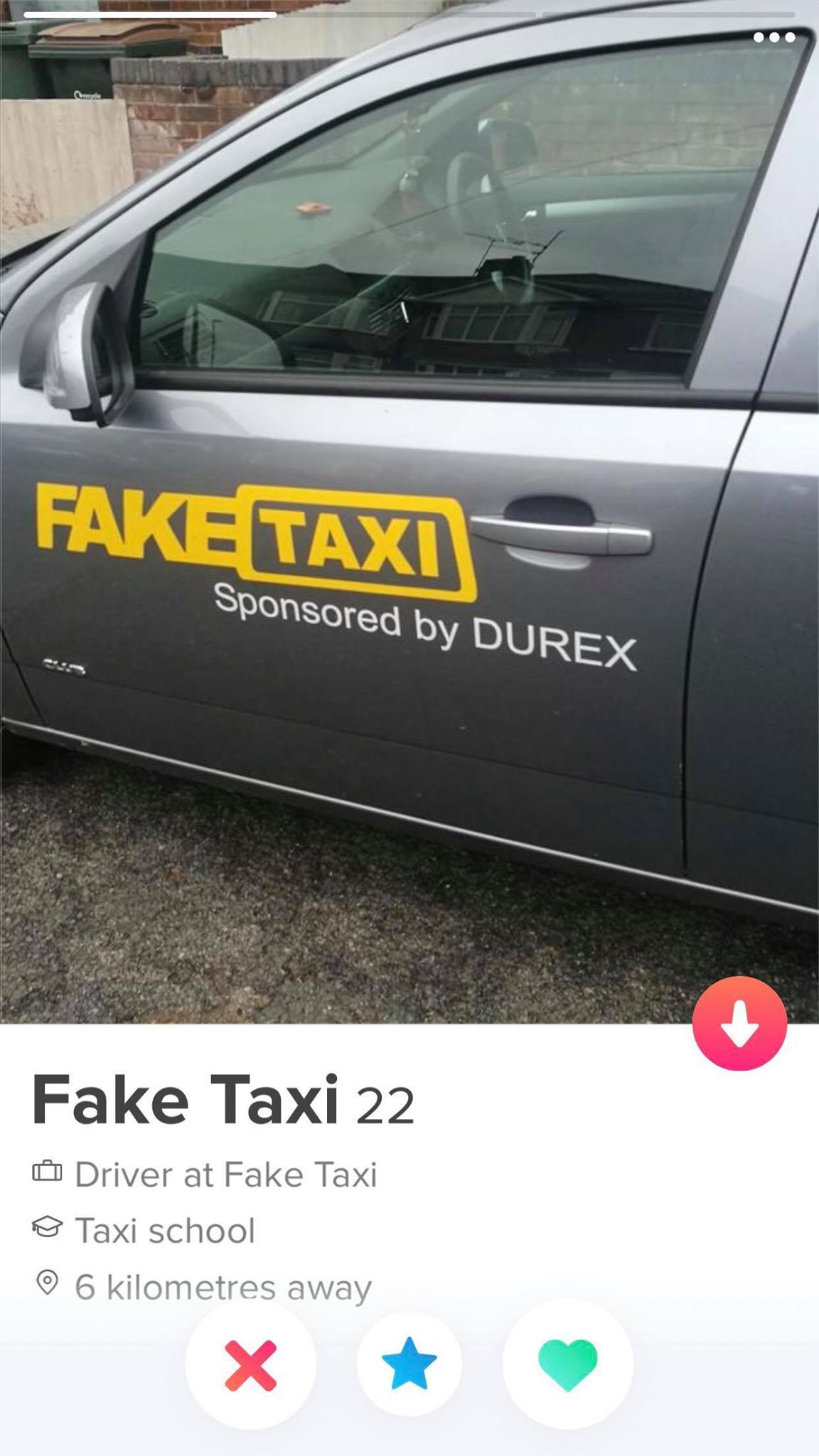 We then asked for his Snapchat username, which he duly gave. Then we got a guy to message him on Snapchat, who was told: "Only girls can get involved, sorry mate".

So, one of our female journalists got in touch on Tinder. When asked if he was the real Fake Taxi, the driver said: "I didn't tell, they didn't ask".

He added: "The sticker came first. Then it was a joke. After that…you know how it ends. Feel free to join.

"A lot of girls, same as boys, are down for crazy stuff. Here we go." 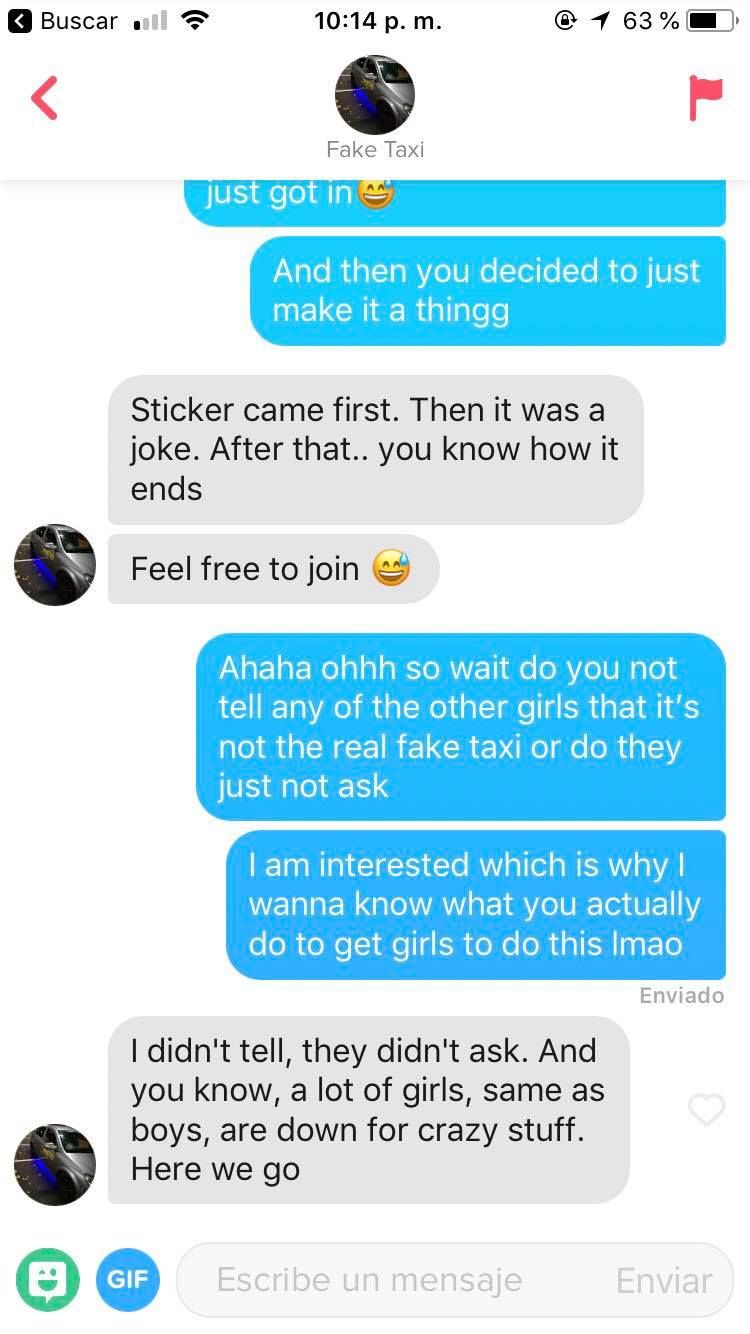 When asked if he'd had many people get in the car, he replied: "Not that much, but you can make that list longer". He said those who got in his car wouldn't "necessarily" be filmed. 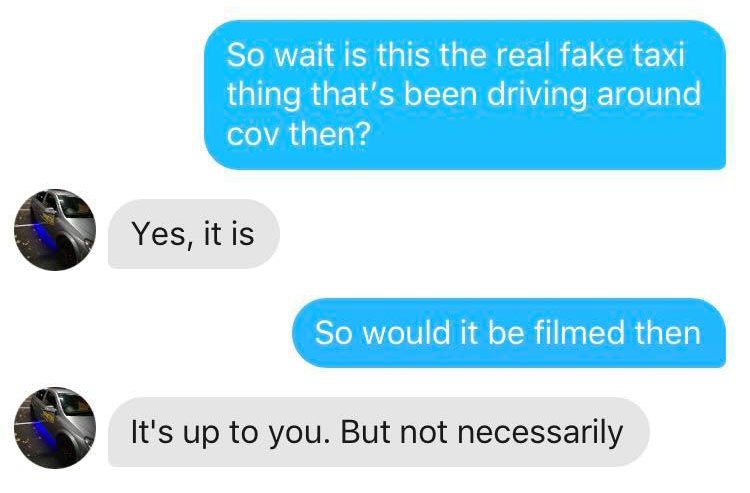 After this exchange the conversation moved to Snapchat, where the driver sent an unsolicited dick pic followed by a selfie.

Our journalists who confronted the man spotted in the "Fake Taxi" outside Kasbah believe it was the same man. We later found the driver on Facebook, where his profile states that he studies Law at Coventry University.

The driver then suggested having sex in the "Fake Taxi" and said five girls had been in the car previously, however "most girls" don't like the idea of being filmed. He added that potential passengers "must be down for a lot of things". 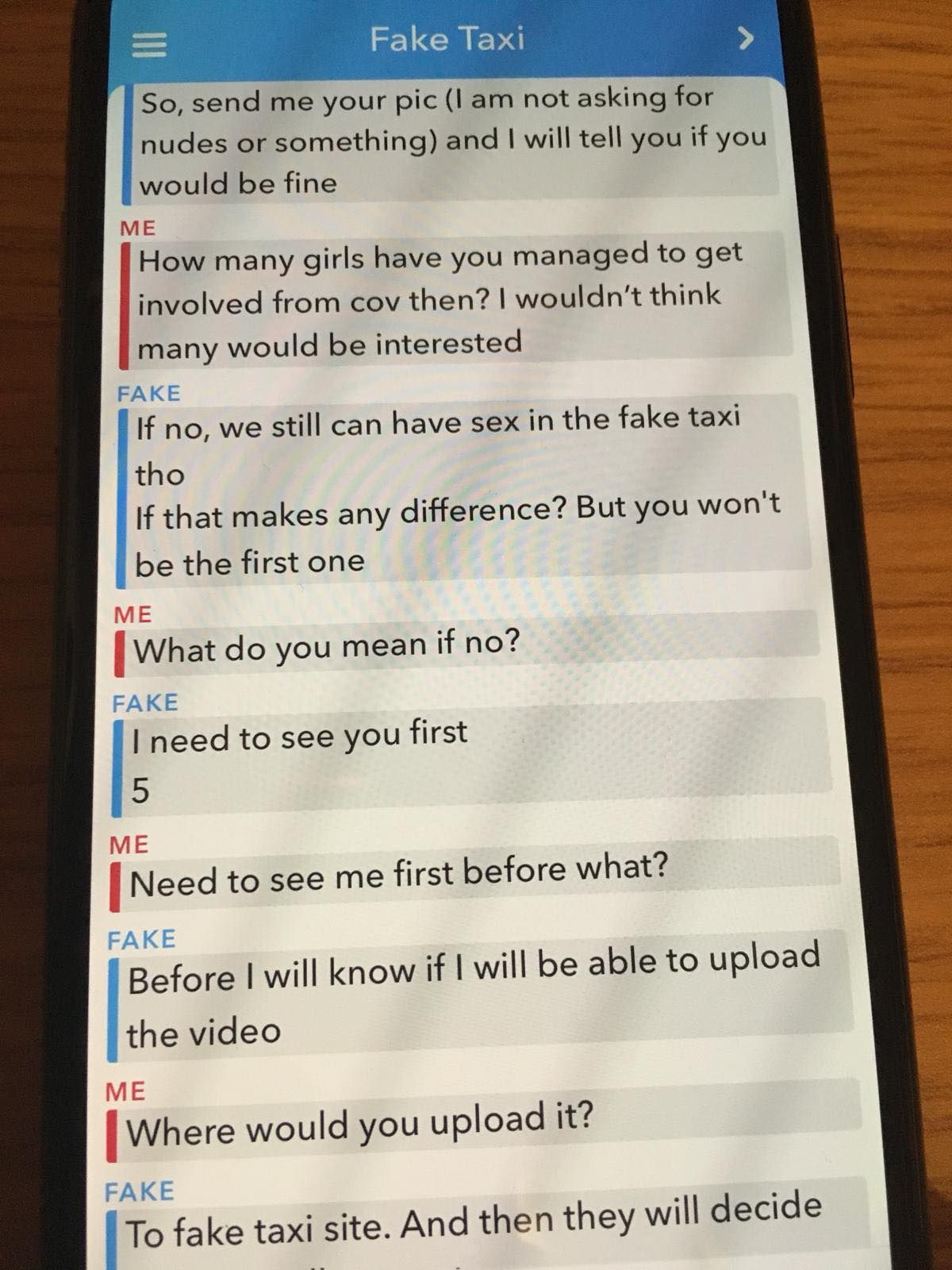 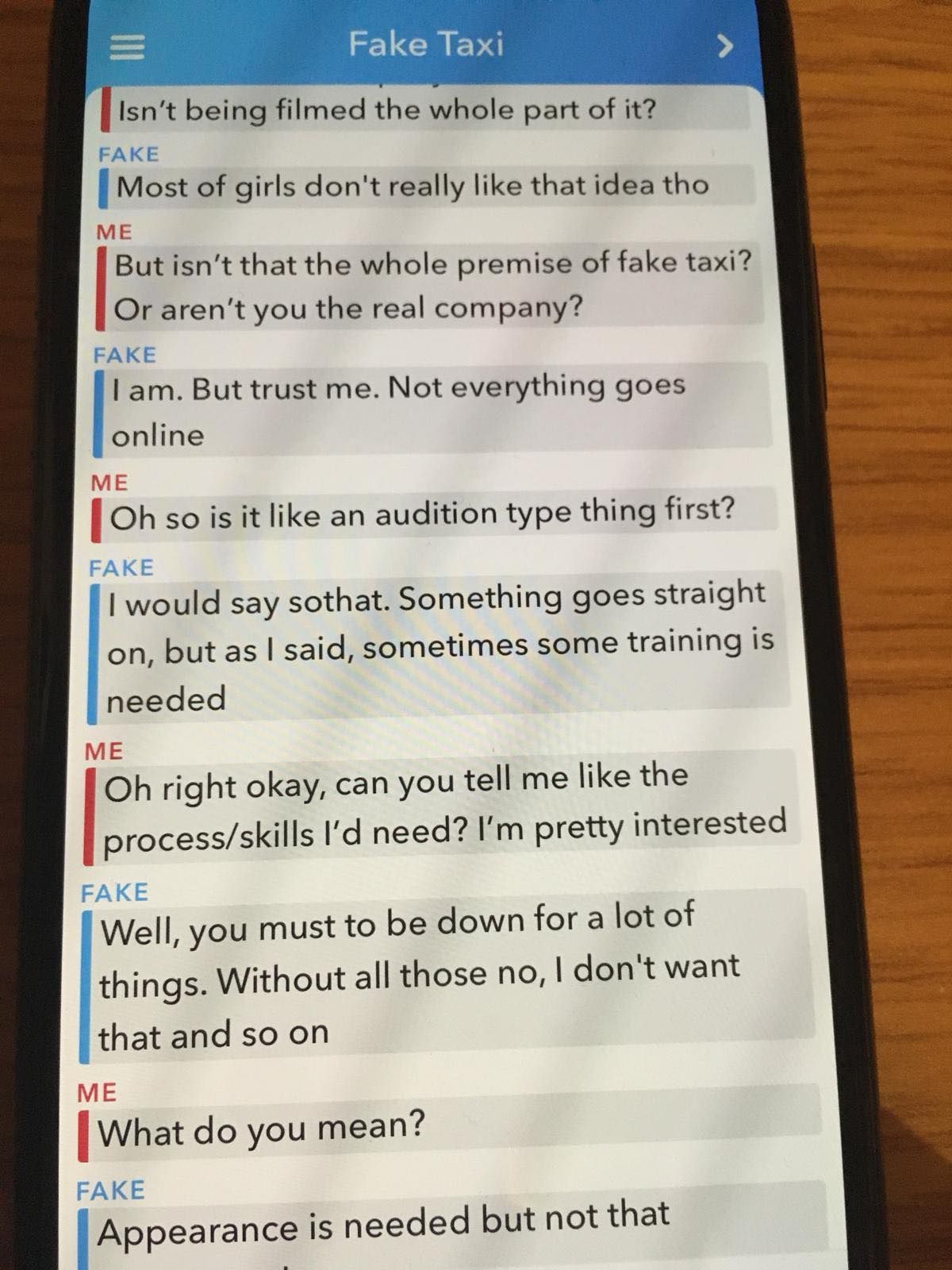 To avoid actually getting in the car, the writer attempted to arrange a meeting at The Earl of Mercia pub under the premise they would discuss what would happen should she wish to "audition".

"I'm not a rapist or something like that," he added. 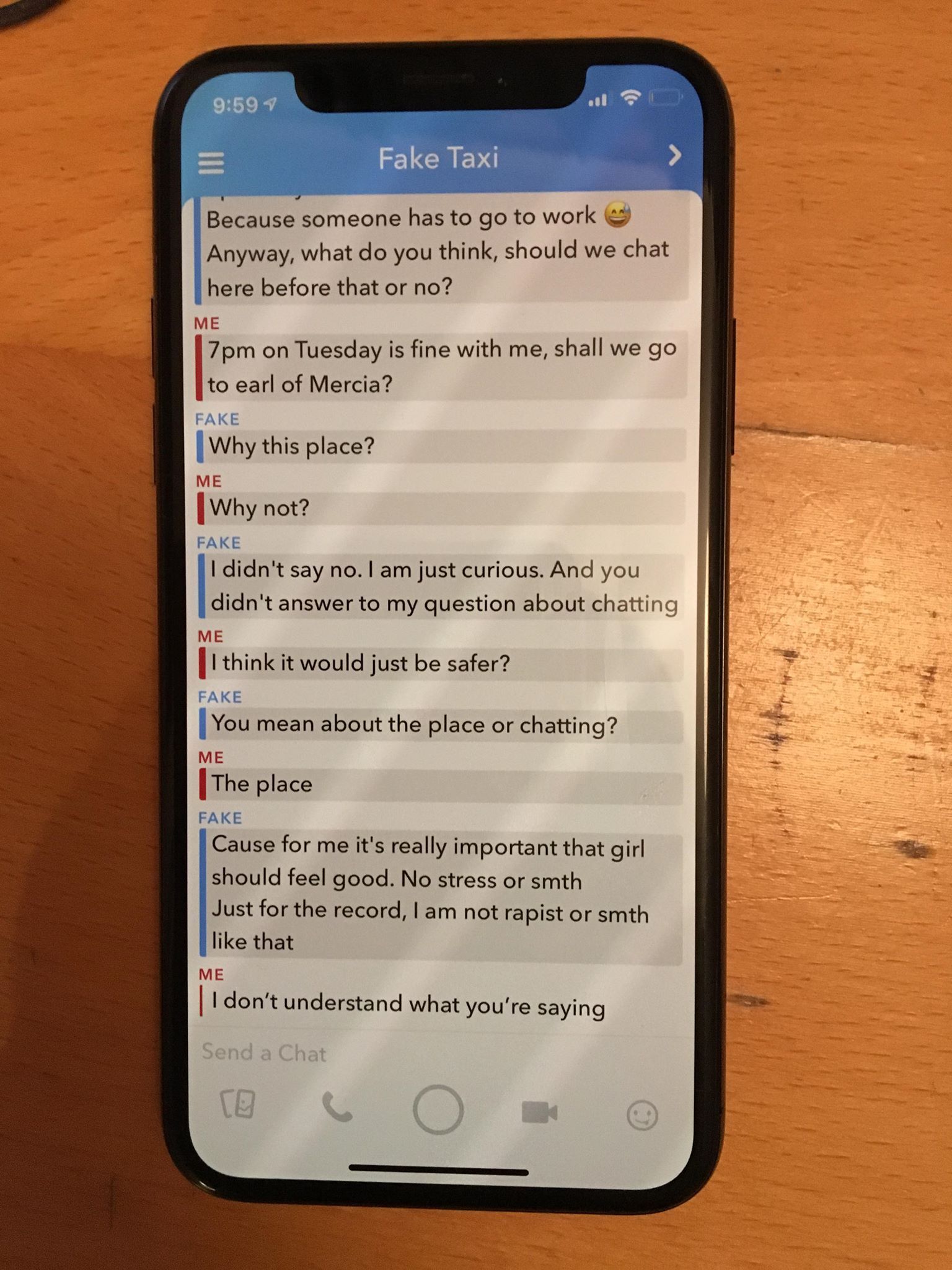 The driver was reluctant to meet beforehand, telling the writer he "didn't need to". He told her he would "agree" to seeing her for a second time should she text him after a first encounter. 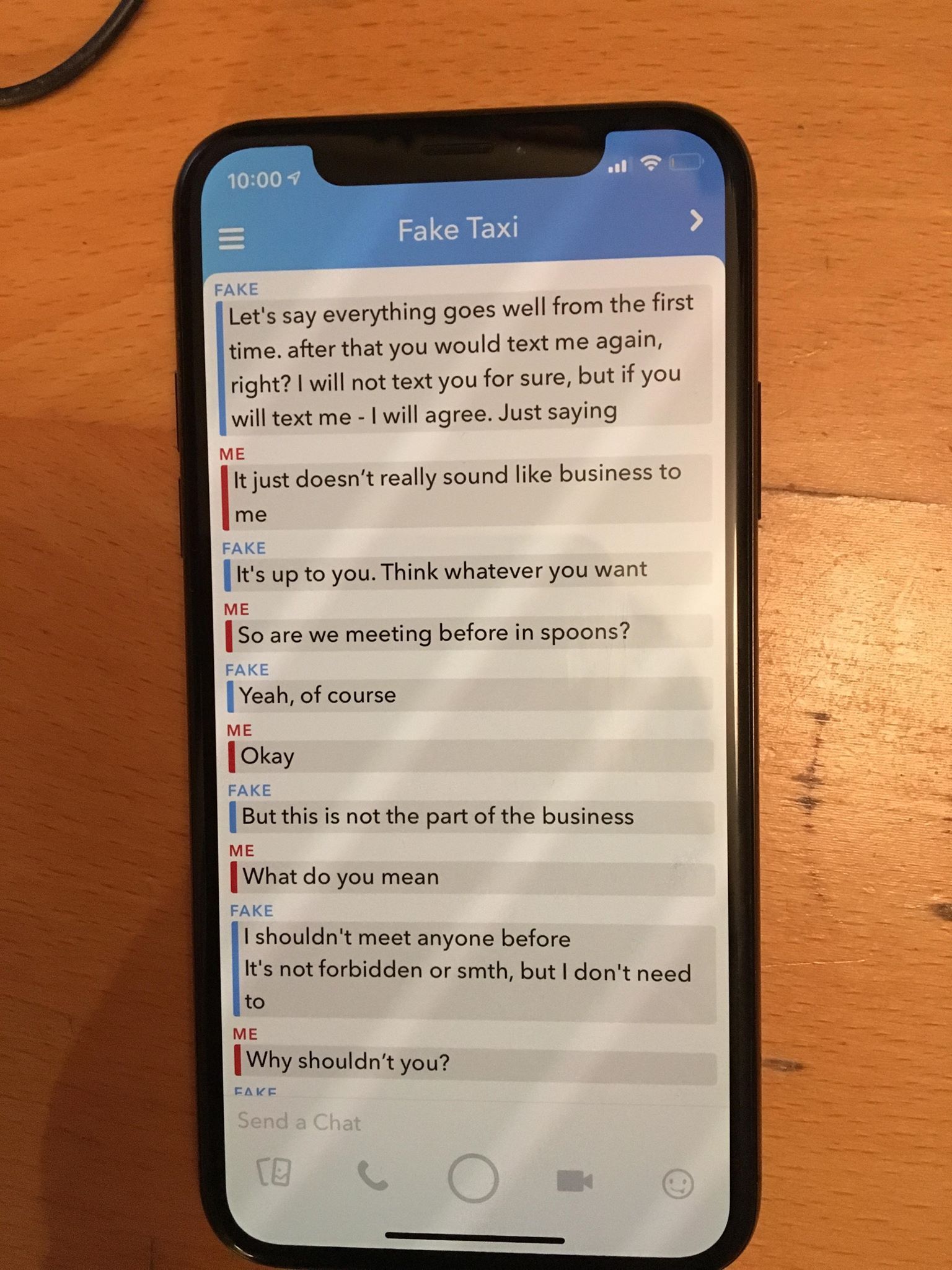 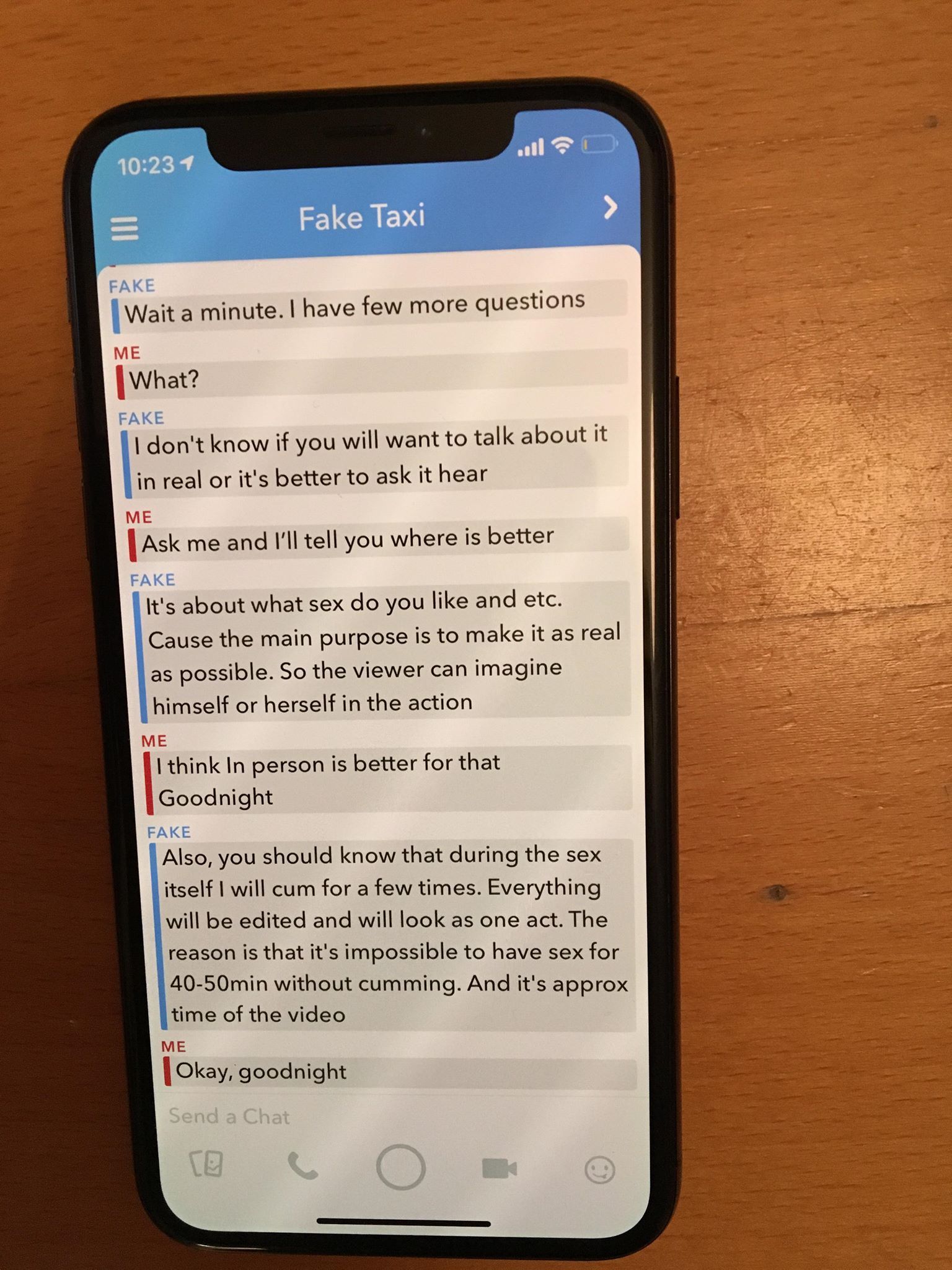 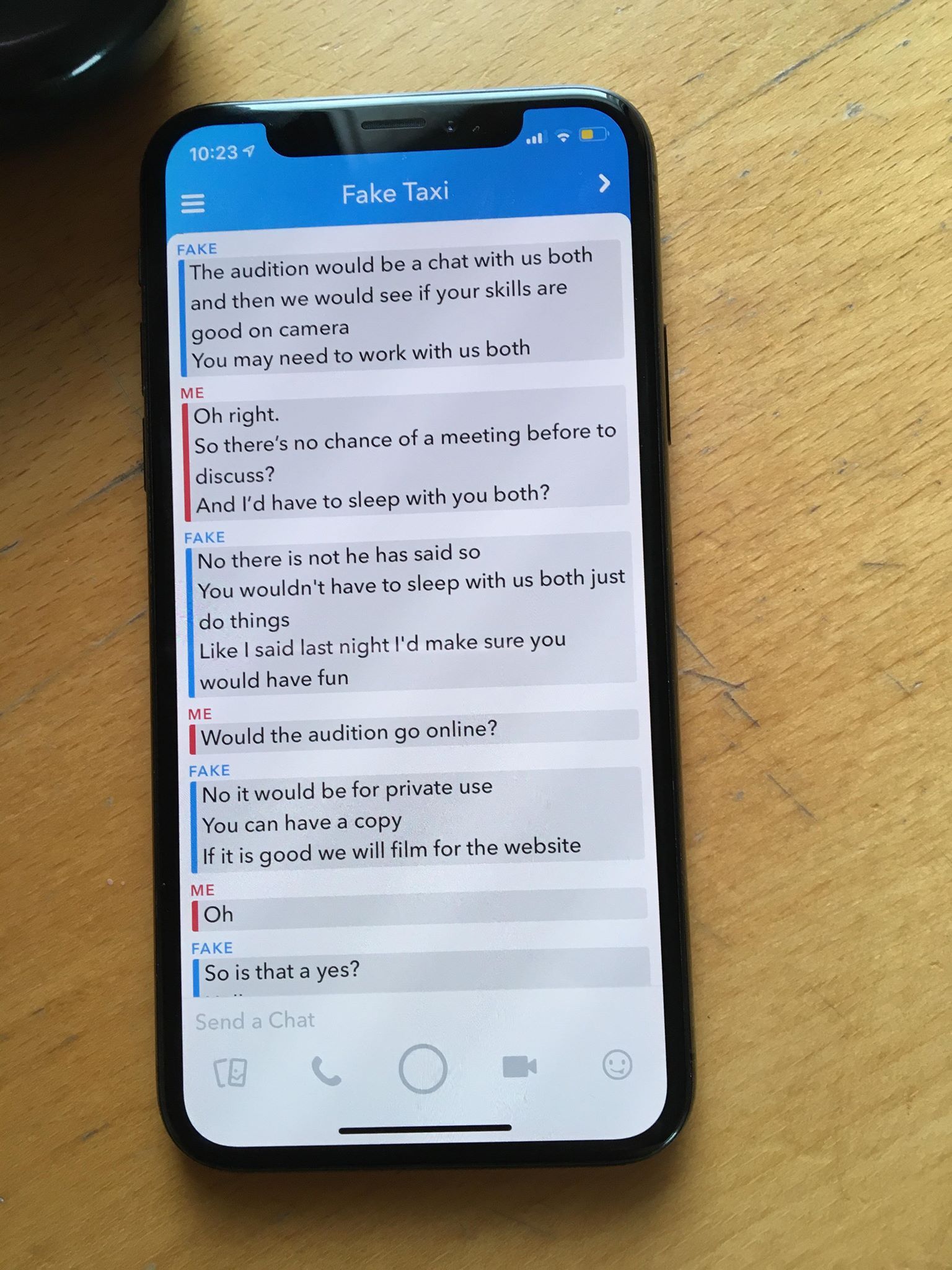 Our journalist was adamant she was not going to meet either the "Fake Taxi" driver or his director inside the car. He responded: "You girls are all the same," adding, "if you will not audition, you cannot take part." He subsequently blocked her. 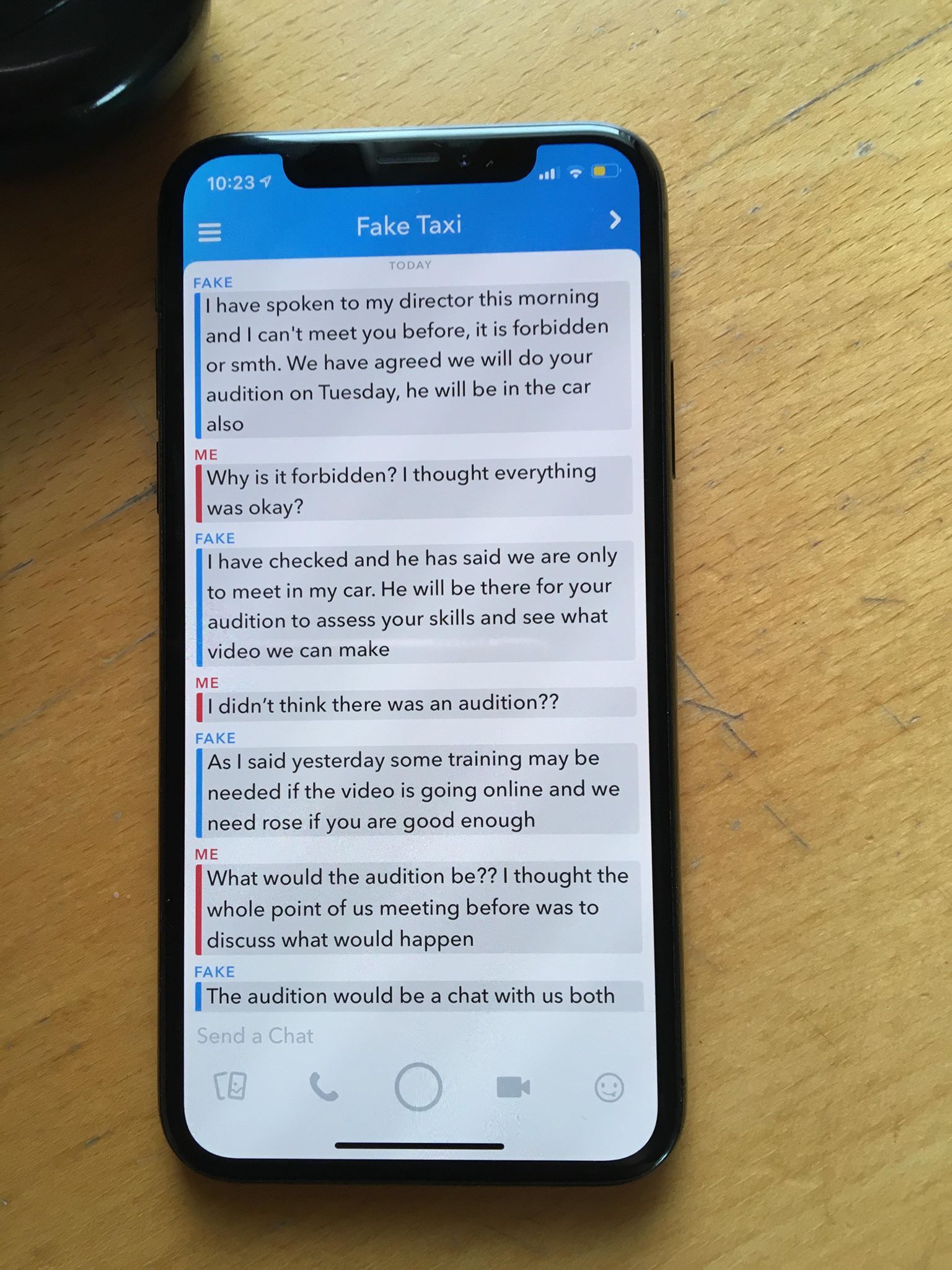 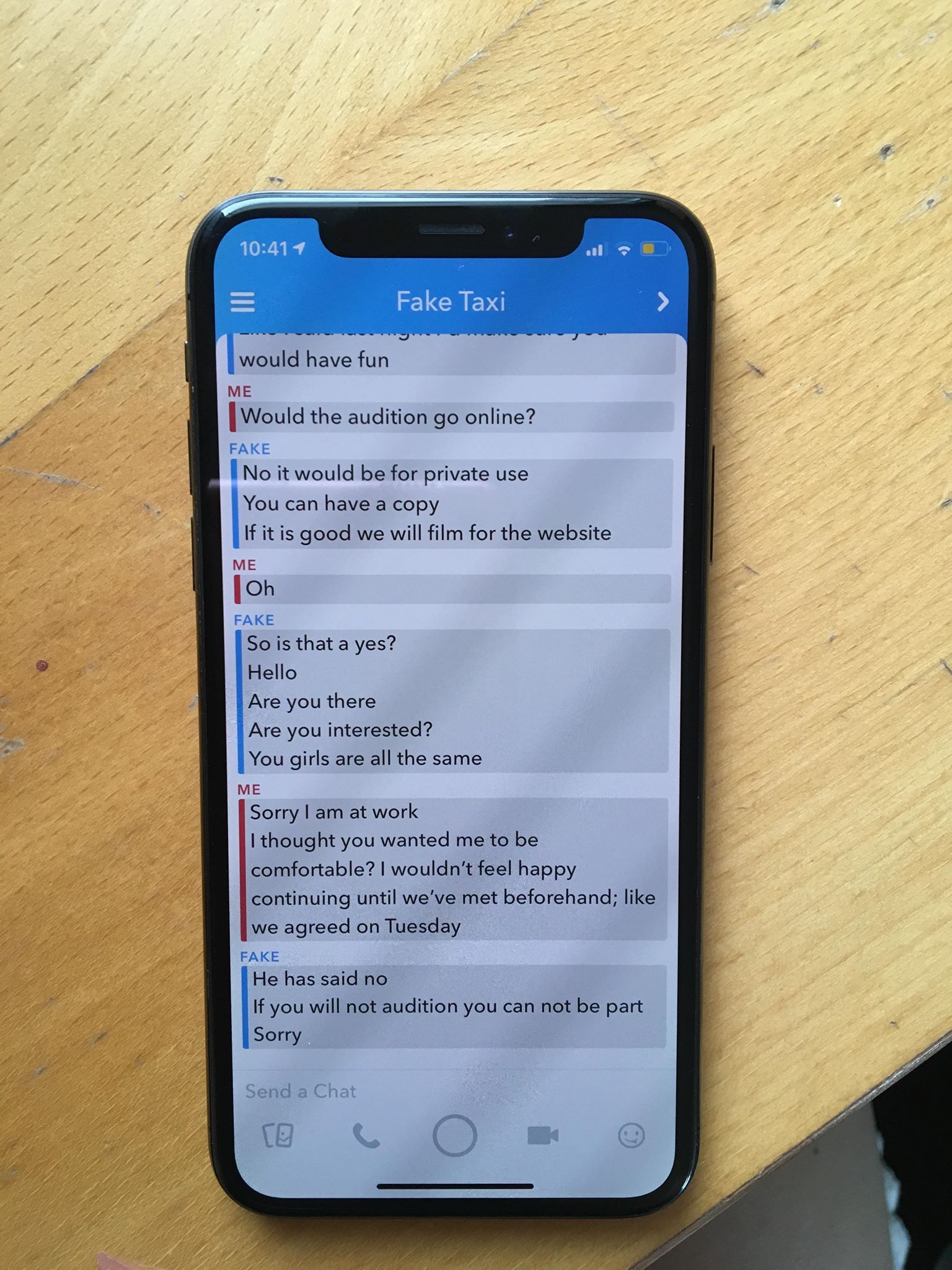 One student alleged that the "Fake Taxi" had tried to lure her into the car on the premise that he was a legitimate taxi. She told The Tab Coventry: "I was out at Kasbah on Monday and on my walk home. I was very drunk. That 'Fake Taxi' pulled up next to me near the Kasbah taxi rank and rolled down the window.

"He told me he was from a taxi service and asked if I was looking for a ride, which I was. I said 'yes' and was about to get in the car before my mate pointed out his 'Fake Taxi' sticker.

"We asked if he was from Fake Taxi he said 'maybe, maybe not'. He said I 'should get in and find out', so obviously I didn’t. I shut the door, so he told me to stop wasting his time and sped off."

In a post to CUMoodle, a Coventry University staff member warned students: "Black 'London-style' cabs operate in Coventry city centre and display a yellow licence plate issued by Coventry City Council on the rear of the vehicle.

"There is a company operating in the city centre called ‘Fake Taxi’ – please do not use this taxi on a night out."

West Midlands Police told The Coventry Tab: "Police are aware of reports of a taxi driving around Coventry with a logo 'Fake Taxi'. The driver has since been spoken to and it appears no offences have been committed.

"If anyone has any concerns, please do not hesitate to contact us on Live Chat at west-midlands.police.uk between 8am to midnight, call 101 anytime.

"If you are planning to take a taxi, we advise you to book it before going out, or take the number of a licensed taxi company with you".

UPDATE: Fake Taxi shared The Tab Coventry's post, saying: "This weirdo has nothing to do with us. Avoid." 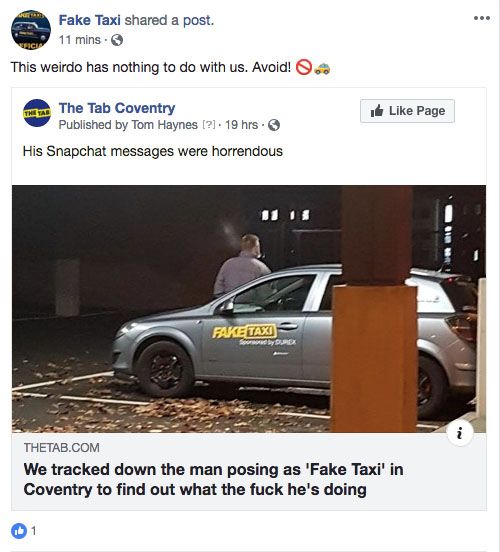 We've also asked Durex whether they are aware of this "Fake Taxi" driving around with their company's logo.

If you have any more information, please email [email protected] All correspondence will be confidential.

• ‘Fake Taxis’ have been spotted driving around Coventry this week