‘Be a force for good in the world’

You might not have been aware, but our species peaked in September 2019… when Flume spotted a sign in the crowd at Burning Man Festival reading “does Flume eat ass” before actually eating his girlfriend’s ass and uploading the video to Instagram. Honestly, I still can’t believe it ever happened, but it did and it was glorious.

If you have no idea what any of this means, watch below (spoiler – he eats an ass):

Burners: Does Flume even eat ass?

Well, Flume is going big on Twitter again because he’s here to save us from today’s terrible times. See, he’s recently been announced as the headliner of Bonnaroo 2020 – which is a festival (duh), and naturally, people are chomping at the bit to see a proper return to public-ass-eating-form.

But there’s a twist. Lizzo is headlining Bonnaroo 2020, and deviants on change.org have decided hers is the only ass that will do for Flumegate 2.0.

These horrible reprobates have created a petition to urge these tow behemoths of culture to offer themselves up for the clout, and it’s the reason Flume is trending right now.

The description reads: “We all saw Flume eat that girl’s ass at Burning Man last year. In 2020 we all want to see Flume eat Lizzo’s ass on stage at Bonnaroo. Be a force for good in the world – let’s get our boy Flume up in that butthole and give Lizzo the ride of a lifetime.”

There are two bumps in the road for the petitioners, however. The first is that both Flume and Lizzo would have to consent to this whole ordeal, and the second is that the petition has already met a rapid demise, living on only as a ghostly screenshot on Reddit and Twitter. For shame. 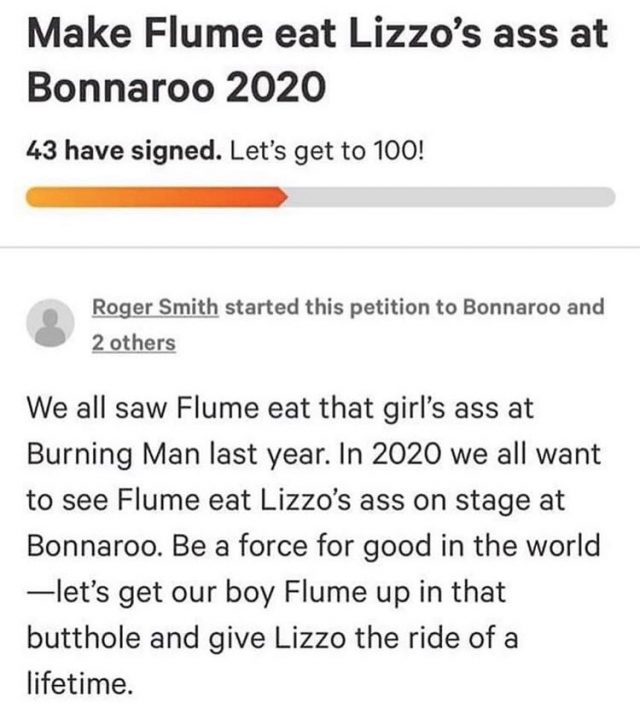 The petition in question

Flume has been in the news more recently for more wholesome antics: He’s donated $100,000 to help combat the fires in Australia. Honestly is there a better celebrity, nay a better person, than Flume? (No.)