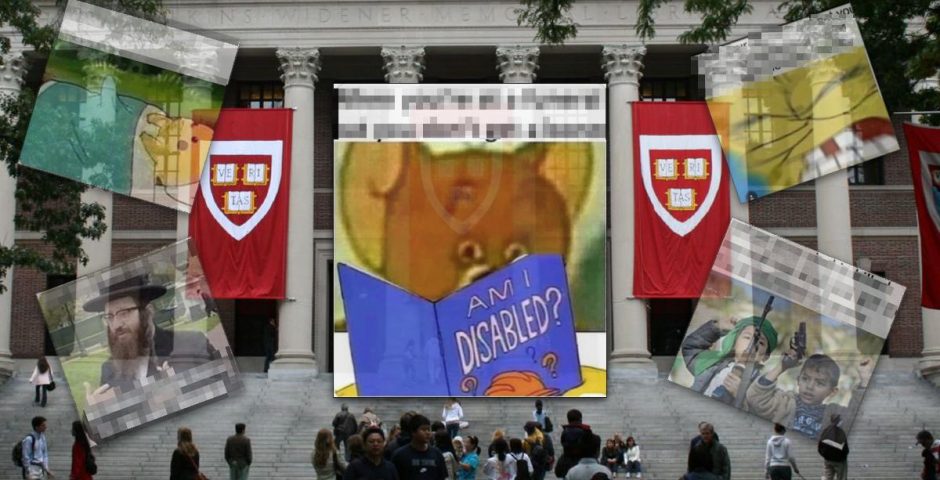 One of the 10 kids who had their offers from Harvard rescinded for sharing awful memes has spoken out for the first time.

The kid, who was booted out of the planet’s most prestigious university for sharing memes about the Holocaust, dead Mexicans and pedophilia said “his whole world shattered” and that his parents were “livid” on hearing the news.

We found his post on a forum for Wall Street wannabes, in which he asked how to bounce back from his desired career of investment banking (“I’m afraid this bump in the road may hinder my future chances of landing an offer”).

When we contacted user Stannis_B, he was initially keen to speak to us for an interview. He then said: “I just called my father and he said we will need to talk about it further regarding an interview.”

Ten days later, we have not heard back from him, so here’s his original post explaining in full gory detail what went down. Spoiler: “It was just banter in a private peer group.” 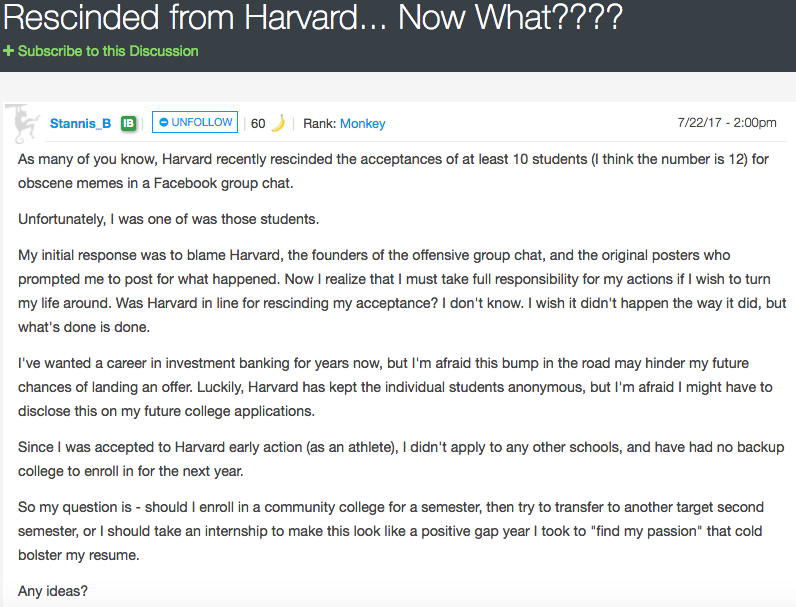 As many of you know, Harvard recently rescinded the acceptances of at least 10 students (I think the number is 12) for obscene memes in a Facebook group chat.

Unfortunately, I was one of was those students.

My initial response was to blame Harvard, the founders of the offensive group chat, and the original posters who prompted me to post for what happened. Now I realize that I must take full responsibility for my actions if I wish to turn my life around. Was Harvard in line for rescinding my acceptance? I don’t know. I wish it didn’t happen the way it did, but what’s done is done.

I’ve wanted a career in investment banking for years now, but I’m afraid this bump in the road may hinder my future chances of landing an offer. Luckily, Harvard has kept the individual students anonymous, but I’m afraid I might have to disclose this on my future college applications.

Since I was accepted to Harvard early action (as an athlete), I didn’t apply to any other schools, and have had no backup college to enroll in for the next year.

So my question is – should I enroll in a community college for a semester, then try to transfer to another target second semester, or I should take an internship to make this look like a positive gap year I took to “find my passion” that could bolster my resume.

And then following up to another user’s question asking for his parents’ reaction, he posted: 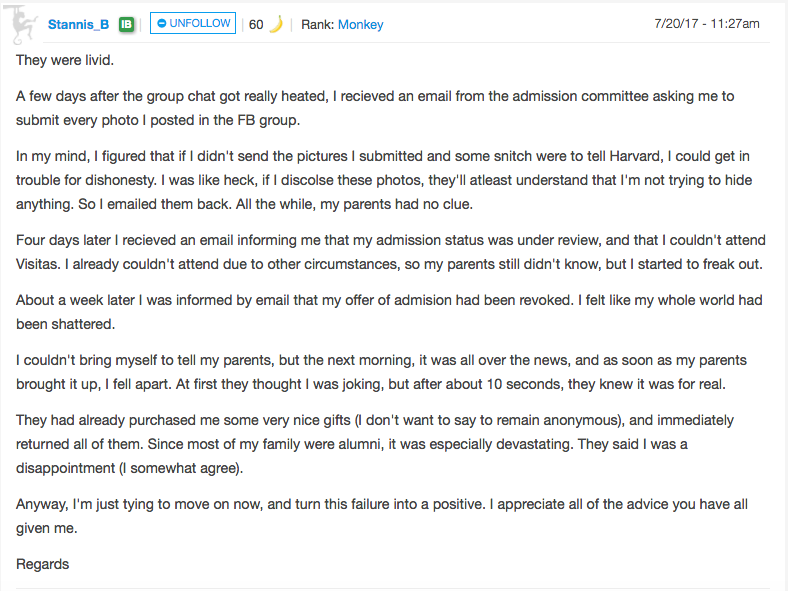 A few days after the group chat got really heated, I received an email from the admission committee asking me to submit every photo I posted in the FB group.

In my mind, I figured that if I didn’t send the pictures I submitted and some snitch were to tell Harvard, I could get in trouble for dishonesty. I was like heck, if I disclose these photos, they’ll at least understand that I’m not trying to hide anything. So I emailed them back. All the while, my parents had no clue.

Four days later I received an email informing me that my admission status was under review, and that I couldn’t attend Visitas. I already couldn’t attend due to other circumstances, so my parents still didn’t know, but I started to freak out.

About a week later I was informed by email that my offer of admission had been revoked. I felt like my whole world had been shattered.

I couldn’t bring myself to tell my parents, but the next morning, it was all over the news, and as soon as my parents brought it up, I fell apart. At first they thought I was joking, but after about 10 seconds, they knew it was for real.

They had already purchased me some very nice gifts (I don’t want to say to remain anonymous), and immediately returned all of them. Since most of my family were alumni, it was especially devastating. They said I was a disappointment (I somewhat agree).

Anyway, I’m just trying to move on now, and turn this failure into a positive. I appreciate all of the advice you have all given me.

When some users float the possibility of suing Harvard, he says:

Yes. The argument I keep hearing is that “Harvard College reserves the right to withdraw an offer of admission under various conditions including if an admitted student engages in behavior that brings into question his or her honesty, maturity, or moral character.”

But my problem with their decision was that it was just banter in a private peer group. Private.

Stannis_B, if you’re reading this and still want to talk, message me on [email protected]