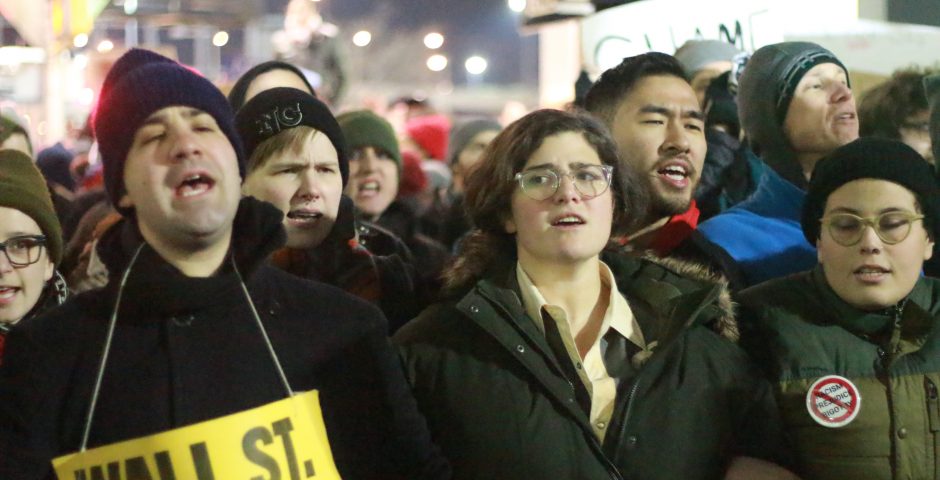 Meanwhile Trump said his ban was ‘working out very nicely’

Protesters gathered in the piercing cold at JFK and chanted late into the night.

“This is bullshit,” says Sabrine Atta, an 18-year-old student at Kent State. She was visiting family in New York when she heard news of the protest at JFK, and decided to join.

Their reason for being here, President Trump’s executive order prohibiting the citizens of seven countries from entering the US, even if they have visas giving them the right to live and work here.

The order, which has been denounced as “an affront to human dignity,” sparked airport protests across the nation as returning travelers found themselves thrown off their flights, detained and then deported. 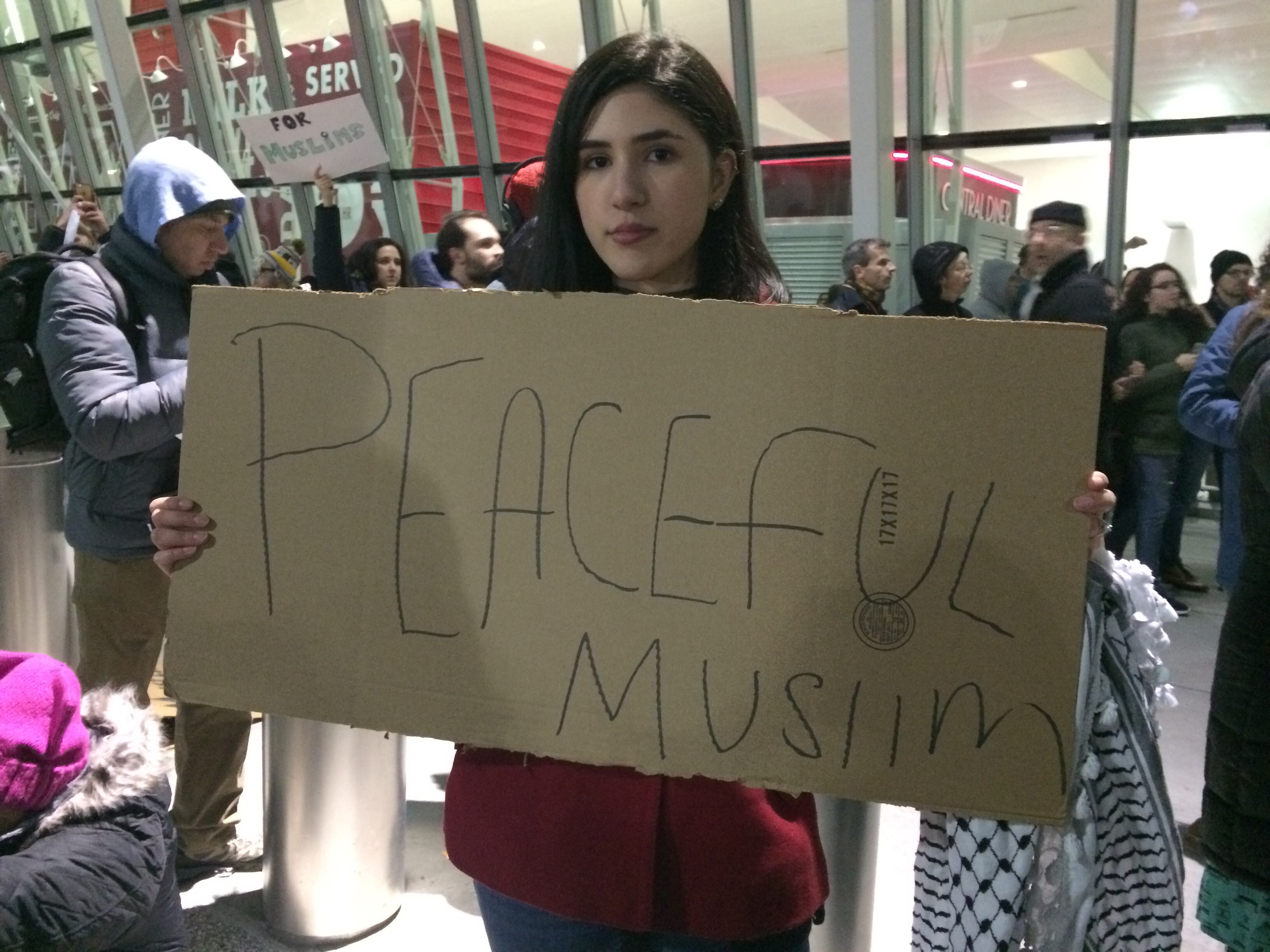 All photos by Charlie Capel

Standing outside Terminal 4 holding a banner reading “peaceful Muslim,” Sabrine explained her fear of her place in America.

“I’m scared. Definitely. America was built on immigration. And a lot of Muslims do good, they work in America as lawyers, doctors, engineers.”

Sabrine says she’s noticed a rise in anti-Muslim sentiment since the election.

“My house has been egged. I’ve deleted my Twitter and other social media because people would threaten me, saying I was an extremist and a radical Muslim.”

“We’re all immigrants,” chimes in a protester next to Sabrine, who’s been listening. “America is a nation of immigrants.”

Sabrine nods. As for the future of Trump’s presidency, she plans to keep protesting. “I hope this continues for four years. I hope it does not die down. We have to resist as much as we can.” 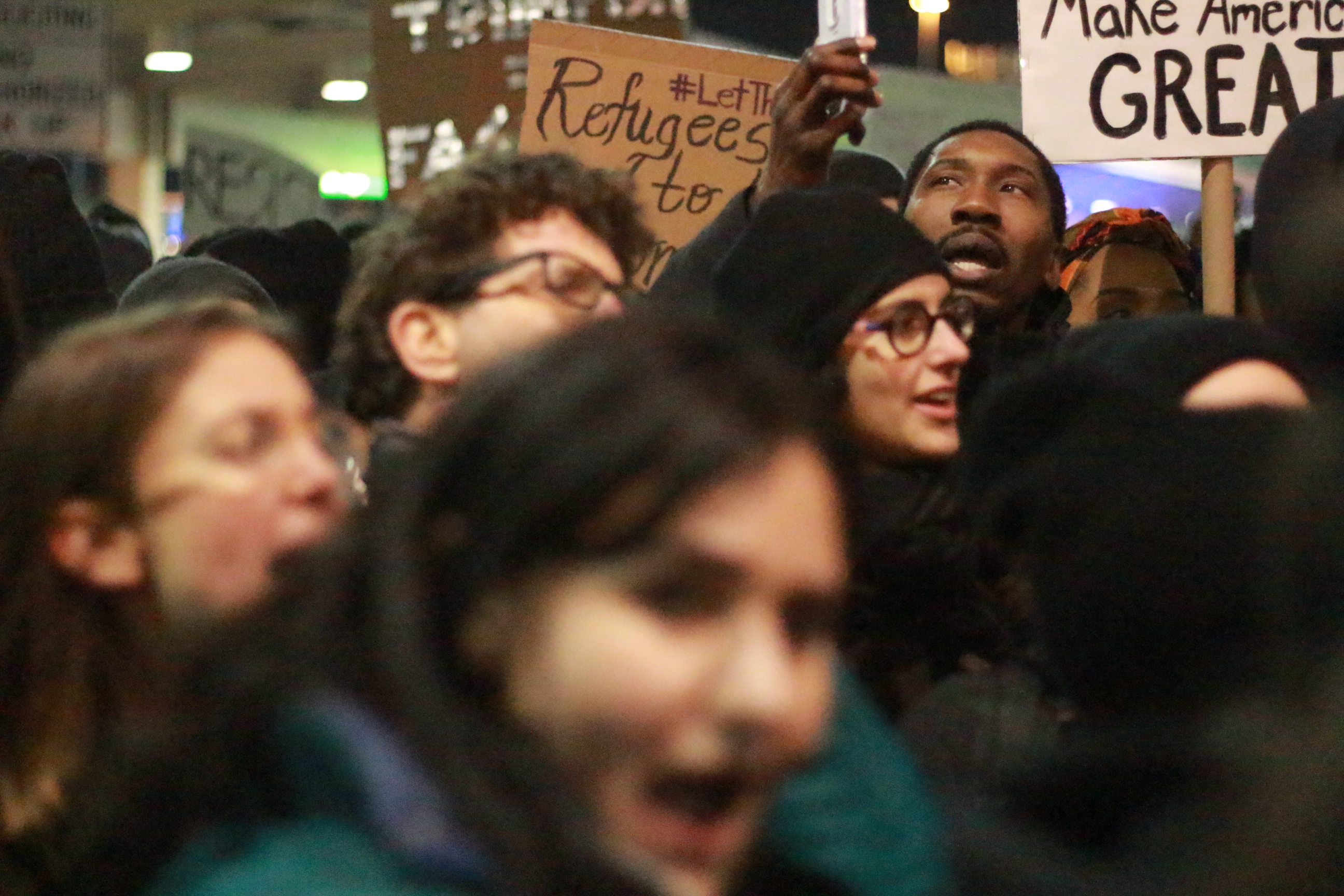 Carlos Jesus Calzadilla, 19, a student activist, says he came to the JFK protest on behalf of a friend. “Before coming here, one of my Muslim friends almost broke down in tears because he got a call from his mom telling him not to go out here. I told him, I’m going to out there for you. It really touched me.”

Standing nearby is Bouhaitha Yousef, an Egyptian-American studying medicine. She’s here with her mom, a practicing physician who emigrated from Egypt. Both are wearing the hijab.

Like Sabrine, Bouhaitha is worried she too could be deported.

“It’s terrifying,” she says. “If I hadn’t been born in Queens, I wouldn’t be able to get an education that would allow me to pay back this country. We came here for a better life. This is what makes America great.” 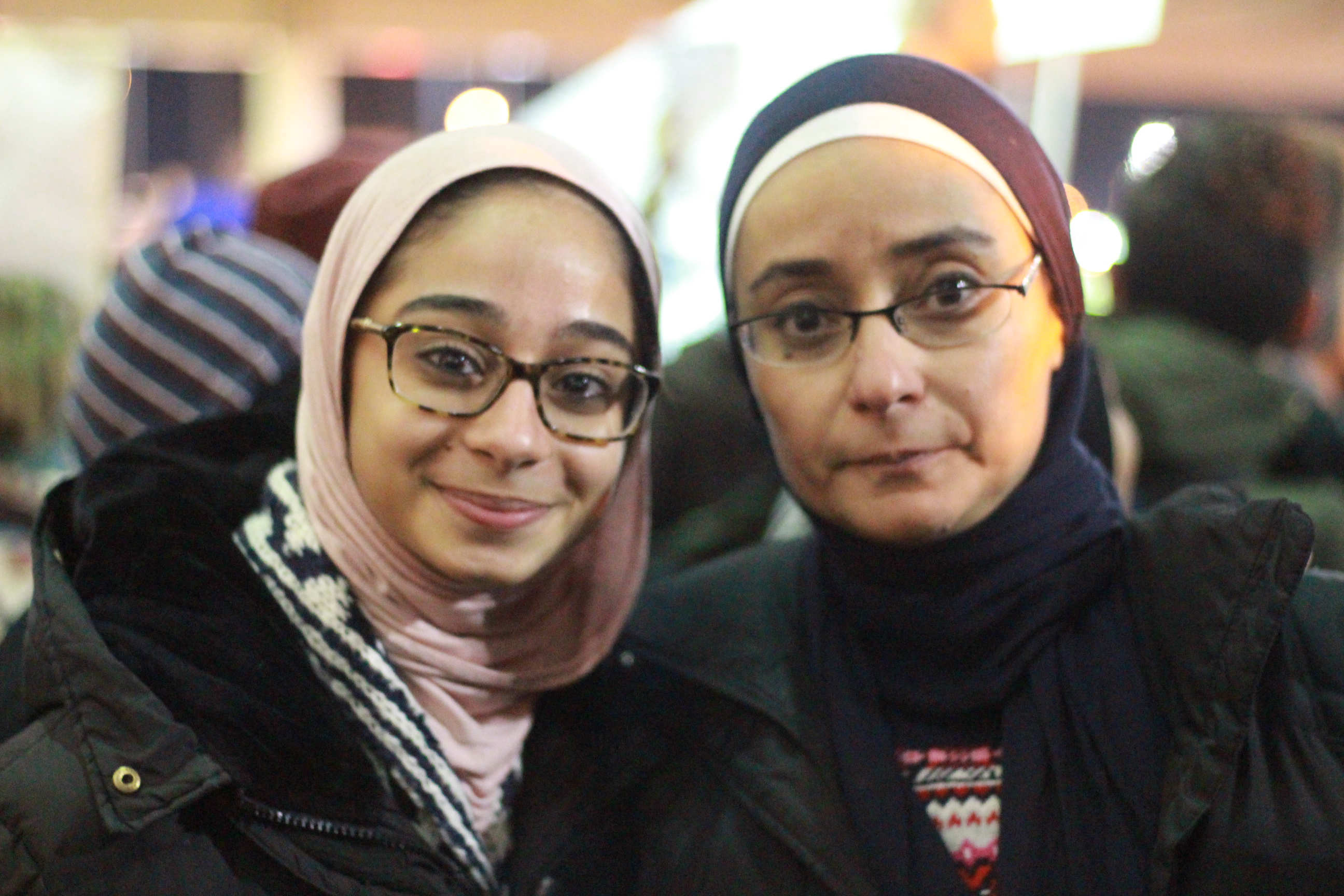 The police in riot gear start pushing protesters off the road and onto the sidewalk, shunting people back with an orange barrier.

Standing to the side of the mass is Khurram Mehtabdim, a young Pakistani doctor working in New York. Discussing the executive order, he says: “It’s the most un-American thing I’ve ever heard of. My ethnic background is not important. My family are all worried, it’s a tough time.”

Nuzat, a master’s student also from Pakistan, feels like her family had a lucky escape from the travel ban. She picked up her grandmother from JFK last week – “I feel like she could have been stopped,” Nuzat says. “She was here last week, it could have been her getting deported. It’s terrible. And I think the next four years are going to get worse.

“America was built on immigrants. If we’re a supposedly great people, why is this happening?” 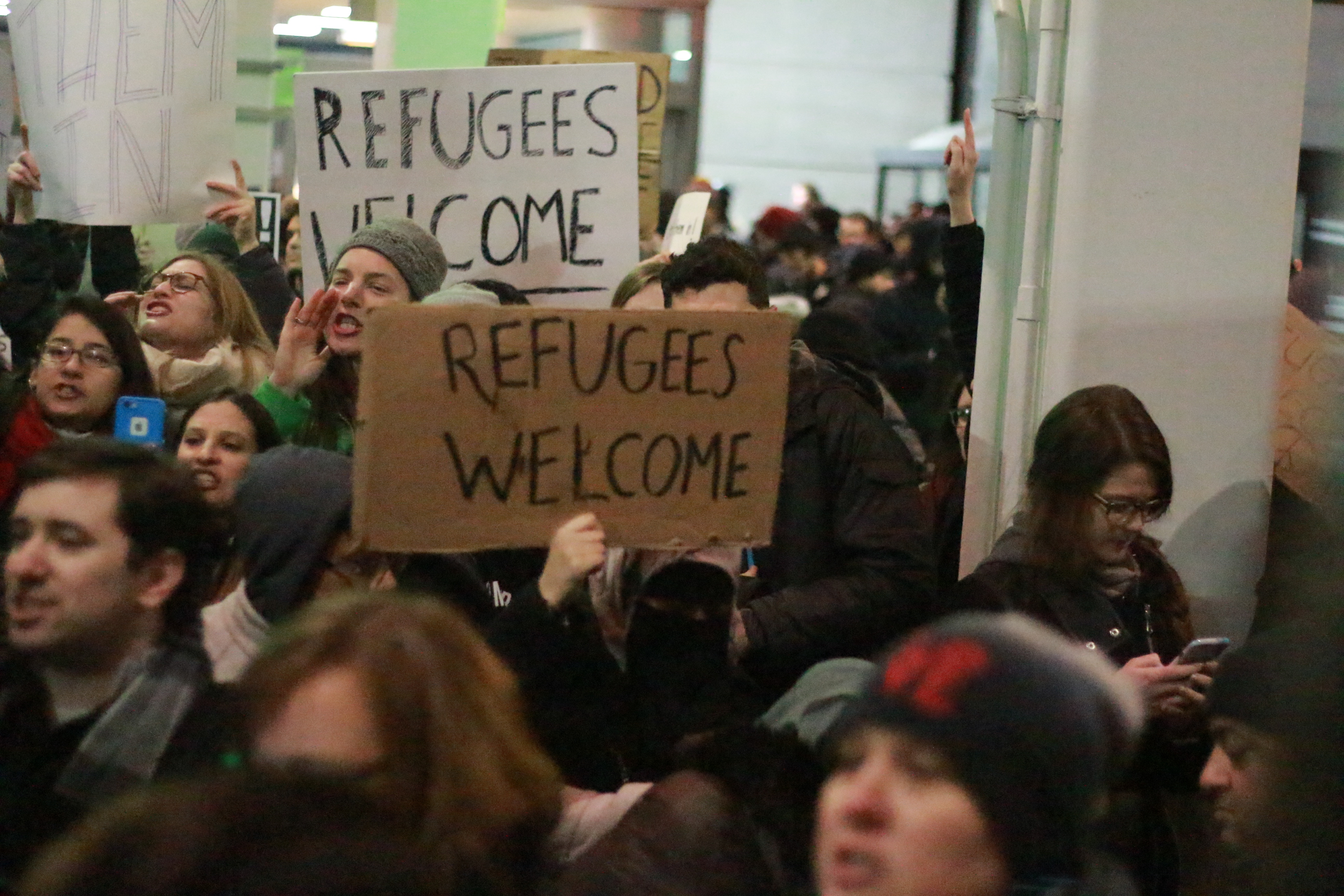 Jannatun, 32, a second grade special needs teacher in Queens, said she is worried about Muslim children in her class.

“They are children. They didn’t ask for this. They have no hand in this. They just need security, and in this time you are taking that security away from them.” 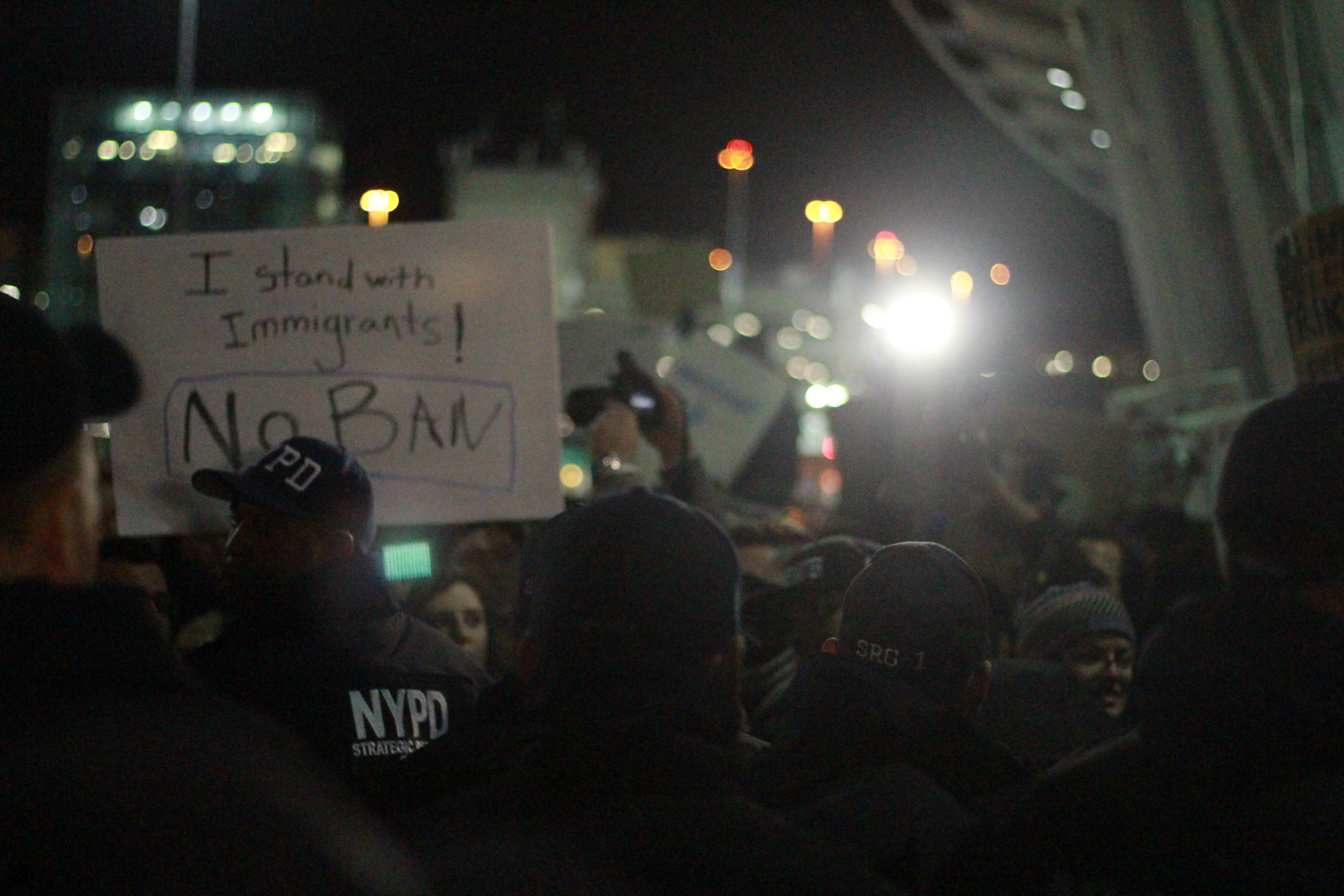 “It makes me feel like we could stop him,” says Amol Sarva, 39, who says he came down to the JFK protest after seeing news of the ban on TV.

Stephanie, 23, the daughter of immigrants from Panama, adds: “We will be here as long as we need to.”