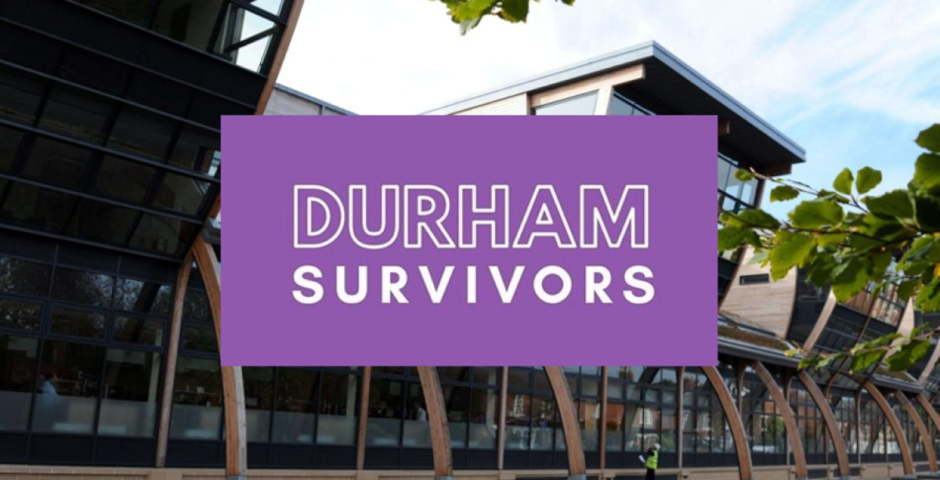 An Instagram page has been set up to provide an anonymous safe space and support network to share stories of and educate people on the issue of sexual assault. Though not a university affiliated organisation, “Durham Survivors” has already received the support of over 1000 followers after its launch earlier this week.

A 2017 report found that Durham, alongside Oxford, had the highest number of reported sexual assaults at a UK university, with 36 incidents recorded over two years. Durham Survivors, founded by a group of cis, trans and non-binary Durham students and graduates, told the Tab Durham “All of the admins have experienced sexual assault, and we want more than anything to provide light to other survivors”.

The platform aims to empower those affected by sexual assault by allowing them to anonymously submit their stories, in a bid to break the taboos often associated with speaking out. Testimonies are submitted via a Google form, though incidents discussed cannot be currently under investigation by either the university, police or the CPS.

The Tab Durham spoke with the founders of the page, to find out more about why they feel the space is a much needed one, and how others can get involved to show their support.

Durham Survivors is a digital space for anonymous survivors submissions. We aim to create a community, a safe space for education and affirmation. #survivor #stories #community #affirmations #safespace

Why did you create Durham Survivors?

“We realised that it often takes being a survivor, or knowing a survivor, before conversations about sexual assault are had. We were inspired by St Andrew’s Survivors, which recently made national news for their work in publicising the endemic rape culture on campus.

“Being a survivor means that we often have no choice but to have conversations about sexual assault, and think about consent and trauma frequently. If we want to tackle the causes of incidents that lead to this trauma, we have a responsibility to engage everyone in these conversations. We’ve made it our mission to build a community of survivors that together, through our platform, can be united and amplified.

“We’re also hoping to catch onto the momentum of this conversation. There’s a vast amount of work to do on our campus and university-wide to improve attitudes around sexual assault and misconduct. Anyone is capable of perpetrating sexual assault, and anyone is capable of surviving it. Due to the culture of silence, these truths are not widely spoken about. Our platform hopes to educate people about, and reframe sexual assault so that every individual becomes more aware of consent in all contexts”.

The cause has gained traction pretty quickly and you reached over 1000 followers in under 48 hours. Are you surprised at the support you’ve had so far?

“We’re surprised, but not pleasantly. 1000 people is a significant chunk of the student community, which sends a strong signal that so many of us know how big this issue is on campus. It implies that too many people have either experienced themselves, or know someone who has experienced, an incident of sexual assault.

“That being said, every follow means that someone has opted in to the conversation, and for that we’re beyond grateful that there are so many people willing to make change happen. We’re really inspired by the support, and hope this is the beginning of an entirely new narrative for students at Durham.

“We know that this conversation will inevitably extend beyond Instagram. We want to hear the strength of survivors on our page being brought into everyday conversation at Durham University and beyond, so that we can understand, ask questions, and use the courage of survivors to educate ourselves further. This account is simply one small window into a systemic issue which we feel is prevalent in every single university”.

Why is sharing stories important, and why specifically do you think Instagram is a good platform to do it on?

“Instagram is a digital space increasingly occupied and mobilised for political and social change. Already this movement is picking up momentum and new Survivors accounts are emerging across other universities. Using a digital space means that we’re able to establish a completely anonymous community: the safest possible space to tackle the culture of silencing survivors”.

Submit your experience using the link in our bio. While navigating the form, you will be asked to comply with vitally important terms and conditions. We ask you to PLEASE READ these in depth, no matter how comfortable you may feel to submit your experience. 1. Read our mission statement: Our goal with this page is to expose the reality of sexual abuse in our community, de-normalise sexual violence, validate the experiences of survivors. We are in no way affiliated or controlled by the University. 2. Attached are a series of resources for survivors, including local helplines, and specific organisations. 3. For further support on how to fill out this form, see our Instagram Highlights or feel free to contact us directly or via our “Ask a Question!” button. Have courage to be the light for other survivors. We hear you, and you will be heard. #metoo #hearmetoo #itsnotok #survivor #believesurvivors #consent #sexualviolence #sexualassault #sexualabuse #awareness

How does sharing stories empower survivors?

“Being an anonymous platform means that we can preserve the wellbeing of survivors, with few implications for their brave retelling of their story. The fact we have to use words like “brave” shows the reality of just how challenging it is to report sexual violence.

“Being able to share our stories provides a platform to help us on our journey to recovery, or at least coming to a point where we are able to process what has happened and also the impact it has had on us. It can also show others who may feel in a similar isolated position that they are not alone, especially if, for example, they self-define as male or as part of a minority or underrepresented community”.

How does one report a story? How does the process work, and how is anonymity ensured?

“Stories can be submitted via the “submissions” link in our Instagram bio. The Google form doesn’t require the entry of any email address or personal details. We ask those submitting to create a 10-digit passcode, so that stories can be retracted or edited anonymously later on. We also ask for all identifying details to be removed: if any identifying information is included, it will be redacted and destroyed.

“Preserving anonymity for all parties is our absolute priority – we want to ensure this is a safe space for survivors to recall and rewrite their trauma with no implications. Survivors should never feel any guilt surrounding their experience”.

How can students show their support for Durham Survivors?

“Right now, we want to get word out about our platform and spread the conversation as much as possible. The overarching aims are to provide a space for survivors, and to open up conversation. To have this movement start from Instagram but spread into open discourse is a huge step forward in creating informed students on sexual assault who will no longer act as bystanders.

“If you’re a student, this conversation starts with you. Share to your friends and any societies you’re a part of – talk about consent with your friends in casual conversation, and introduce knowledge of terms to welcome them into everyday discourse. Check in on any survivors you know in this time and ask them how you can be there for them or how you can be better”.

ABOUT US: how to submit your story. Here is our purpose, and everything you need to know before tomorrow’s submission link release.

Will the page always be non-affiliated with the uni or will you seek ratification at some point?

“Our strength lies in our independence and ability to provide a neutral space, which will remain anonymous. We work closely with It’s NOT OK Durham, which is the official student group working to tackle sexual violence, domestic abuse and to support student survivors within Durham University.

“We’ve also worked closely with other Survivor accounts across England and Scotland- everything posted has been carefully compiled by incredibly educated and qualified survivors. Everything posted on the account has come from a reputable source”.

Anyone affected by the issues raised by the Durham Survivors page can seek support here.