WHO THOUGHT THIS WAS A GOOD IDEA

Look, Love Wedding Repeat is not an objectively terrible movie. And hear me when I say: Netflix have produced some objectively terrible movies. Secret Obsession, Tall Girl… RIVERDALE? It may not be a movie but we all know it needs to be included on that list. But Love Wedding Repeat pitched itself as a Richard Curtis (writer of Love Actually, Notting Hill, Four Weddings, About Time – I could go on) style romcom with instant classic potential. It had what every UK newspaper have likely called a “star studded cast”: the fit one from The Hunger Games, Jas from Angus Thongs and the gal from Slumdog Millionaire. Jai ho! It’s all looking very promising. And yet…

It sucks. The premise of the movie is that a blathering boring main male character’s sister is getting married, but her cokey ex turns up and tries to ruin it. They try to spike him (??? Okay ???) to put a stop to this and it all goes awry when they spike the wrong person. And then there’s a twist. And it is the shittest twist ever. So here we are. If you are equally as frustrated as me, take my hand, and let’s walk through the Love Wedding Repeat hall of fame of mistakes together. I’ll point them out and you can go “ah, yeah, that was shit!” and then at the end we’ll hug, part ways and go watch About Time to make ourselves feel better. But for now: rage.

*SPOILERS AHEAD AS I LITERALLY ROAST THE ENTIRE MOVIE, OBVIOUSLY*

1. I have never been less invested in a main character 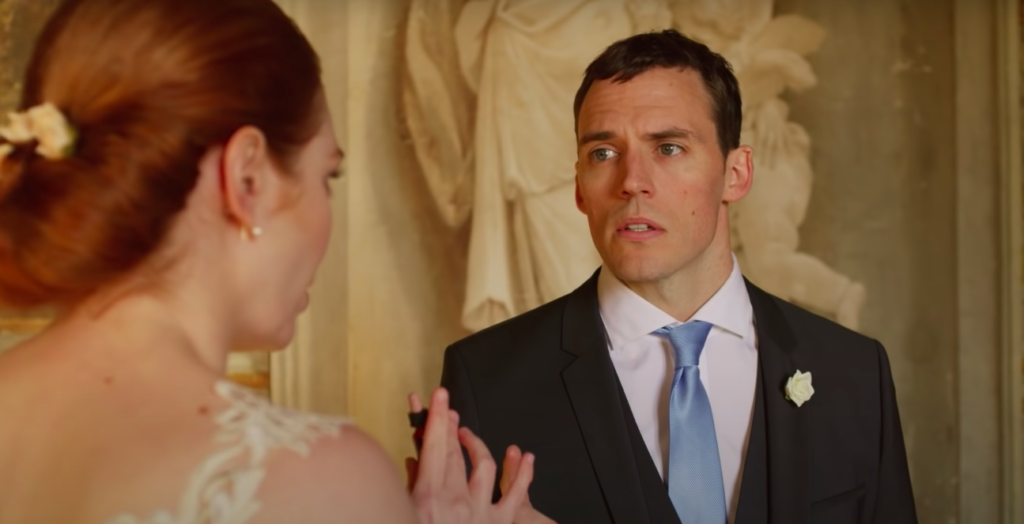 Sam Claflin is an alright looking man and that really is all I got from his performance in this film. If you asked me to sum up any of his characteristics I just… couldn’t? He legitimately has no personality. The only description I could muster is: beige. And yet for some reason we are supposed to understand that both Olivia Munn and Freida Pinto are completely in love with him. I’m sorry, no. It’s 2020, if you want to match male characters up with women that fit you’re going to need give them a little more personality than a posh accent and looking good in a suit.

2. I’ve actually never been less invested in any characters

I don’t even remember any of their names. That’s why I’m calling them by their actors names, it’s not an attempt to sound cultured.

3. The entire plot of this rom com revolves around covering up a bride cheating on her new husband… doesn’t sound very rom or com if you ask me

Let me lay out the plot bare and unobstructed: Jas from Angus Thongs cheats on her husband three weeks before her wedding with some random guy. Guy becomes obsessed with her, flies to Italy (Who has that kinda money! Imagine having that hold over a man after one shag. What are her secrets?), tries to ruin her wedding and win her back. She tells her brother to spike him in order to subdue him, lest her husband find out and leave her. In the end, he doesn’t find out, and all is well. What the fuck! Like seriously. What the fuck. No one in this movie is a good or normal person.

4. Why is Dame Judi Dench randomly in the voice over

Judi’s agent has really got it out for her at the moment. First Cats, then this.

5. Everyone in this film is a massive pussy 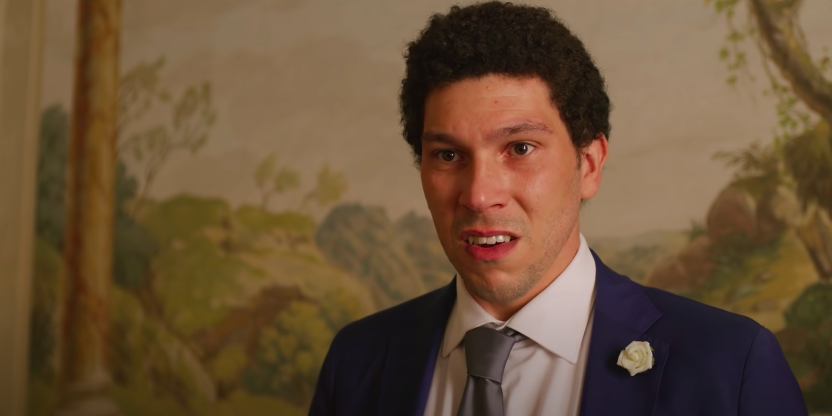 Yeah I said it! The central romance plot in this film is only a plot because Sam Claflin didn’t have the balls to kiss Olivia Munn in the first scene, despite their being a pathetically long pause that we all were forced to wait through, knowing what would (or rather, wouldn’t) happen. Don’t get it twisted though, the onus is not on the man to kiss the woman – I’m just as angry as Olivia Munn. You mean to tell me that two people waltzing around Rome for days together, a couple of glasses of wine and dinner deep, aren’t gonna at least try and snog? I call bullshit.

Romeo and Juliet had a bloody family feud. Jack and Ennis had to come to terms with their sexualities (hard) AND being cowboys (even harder) in Brokeback Mountain. Jack and Rose literally had the Titanic collapse beneath them. But Sam Claflin and Olivia Munn don’t shag because they what? Aren’t sat next to each other at a wedding reception. GROW UP. GO TALK TO EACH OTHER. THIS IS NOT YEAR EIGHT.

7. And the twist is (drum roll please): It doesn’t actually happen! 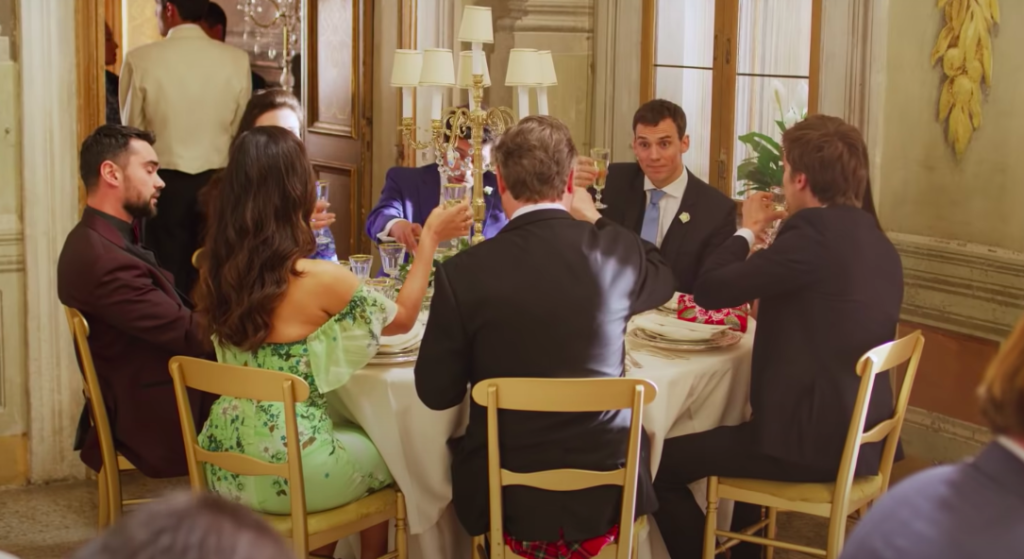 Groundhog day is turning in its fucking grave. This is an insult to movies with time loops. A movie with a time loop normally repeats one day multiple times until a character rights a wrong, reaches some kind of grand epiphany or I don’t know… dies? As much as they’re frustrating to watch, the beauty is in the butterfly effect – seeing how everything changes with each action. Love Wedding Repeat does not do this. It shows you what didn’t happen, and then it shows you what does. Once. WHAT AMAZING WRITING.

The trailer makes it out like we see the reality of each character being the subject of the spiking and how it plays out. This would have been a pretty good movie. But we don’t see this – we see two versions of reality and a very quick montage of how it could have happened with other characters. Even Judi Dench’s voice over can’t help out this profound misstep. You can still see the editors notes on the script in red ink saying “MOVIE IS OVER THREE HOURS. MUST CUT DOWN.”  So we got left with a time loop movie with… one time loop. I’m suing Netflix for the whiplash this twist gave me.

8. I just found out that the voice over isn’t even Judi Dench

It’s someone called Penny Ryder? Just take it off Netflix. What’s the point.

9. Olivia Munn just casually throws in that she was kidnapped

Wait what. Okay, fair, guess you added this to make the character more interesting, can’t wait to explore thi- oh no wait we don’t.

10. Are we supposed to be interested in the whole Amanda/Chaz debacle?

Often the best part of films like this is the small sub-plots going on beneath the drama, with the often far-more-interesting side characters. Think of Hugh Grant’s best mate in Four Weddings, or his deaf brother who ends up happily in love, or Colin Frissle in Love Actually. The problem with Love Wedding Repeat is that the smaller characters are just as bland as the main ones, and so all those storylines flop too.

The worst one you’re forced to sit through is that of Amanda and Chaz, Sam Claflin’s impossibly gorgeous, mean ex-girlfriend and her pathetic boyfriend. The running joke is that she thinks he has a small penis and really, that is… the whole joke. Every time this couple was on screen I just wanted to let out my longest Yeah Boi ever but in sigh form. Like this: Uuuuuuuuugghhhhhhhhhhhhhhhhhhh.

11. I’m gonna say it, the boring guy is the best character in the film

When he first approaches Olivia Munn after the ceremony, you beg that you won’t have to watch this guy for the rest of the film. That he is just a passing character. But in fact, he becomes very involved, and is honestly the only example of real humour in the whole film. When he interrupts Olivia Munn’s story about the Taliban to ask her what she was wearing you could maybe even hasten to laugh. And by the end you just want him to be happy. That’s character development.

12. Are we all just meant to accept that drugging the ex is a realistic and normal solution?

I know this is a movie. I know. But this isn’t believable for a moment. No humans would do this – especially humans this bland. If Sam Claflin can’t even kiss Olivia Munn when he has a wide open window you are not going to be able to convince me that he would agree to spiking a man at a wedding reception.

13. The spiking is clearly supposed to be the funniest part of the film and it just totally isn’t

14. And the strongest performance in this film is… Jas from Angus Thongs and Perfect Snogging

The Oscar goes to Jas fro – wait *reads smudged writing on hand* – Eleanor Tomlinson! She is the only good actor in this, and no one can convince me otherwise. When I was watching it I was so taken about because all I could remember of her was Jas, and then I remembered she’s actually in Poldark and is a pretty experienced, professional actor. Honestly all the awards to Eleanor because she CARRIED this film. Everyone else can go home.

• I’m sorry to tell you this but Angus, Thongs and Perfect Snogging is completely messed up

• How well do you remember Angus, Thongs and Perfect Snogging, 10 years on?