Loughborough Hockey freshers made to eat maggots during ‘brutal’ initiation

Loughborough Women's Hockey freshers were made to eat dead maggots, dog food and were egged by the older students during an initiation, The Tab can reveal.

Messages and notes obtained by The Tab from two Hockey freshers show the extent of the "brutal" initiation, which took place on Friday 6th December.

During the night of the initiation every girl "vommed at least once", were tricked into almost eating a live centipede and one girl became so cold that she was given a foil hypothermia blanket. Loughborough University are now officially investigating the initiation.

They were made to eat maggots, raw onions and dog food

The night involved five themes, which were based on the different houses the girls would attend. The first house was the "I'm A Celeb" house where freshers were forced to eat dead maggots, dog food, dog biscuits and bite onions while downing dirty pints and pints of milk. Notes written by the first fresher to document the night show the full extent of what they were made to do.

Notes from fresher one

The older students also presented freshers with a live centipede and told them to eat it on the count of three, but were joking. A message from the second Hockey fresher says: "We had to also at the first house good a live worm centipede thing and they were like eat it in 3 2 1 and everyone went to put it in their mouth but they were like nah only kidding."

In the second house, freshers had to drink a dirty pint of beef and fosters. They were also made to pass a spicy soup along from one end of a line of girls to the other only using their mouths to fill up a cup.

The second fresher said: "I vommed after the chilli soup bit. The soup was gone off and I nearly [vomited] into X's mouth. I managed to hold it down till I passed the soup on then vommed." She adds later that her vomiting was "projectile."

They were made to crab walk or crawl between destinations

In between each house the freshers were pelted with eggs, flour and cider while walking. They were made to crawl or walk like lobsters while getting from house to house.

In the third house the freshers were split into two teams where they had to finish a bottle of Frosty Jack's. The second fresher said: "Bottle of Frosty Jack's is like three litre cider and I down about 1.5 litres and died I was so cold as well like proper chattering teeth so X took me into her house and gave me a foil blanket whilst my team went in without me." At this point the second fresher was too ill to continue, so she stayed at home.

Notes from fresher one

Freshers were made to down drinks all night

The Hockey team then went to the fourth house which was quiz themed and held in a basement. The freshers had to crawl into the basement and were made to sit on the floor, as only older Hockey team members were allowed chairs. In her notes the first fresher said: "When we gave wrong answers we had to drink shots with chilli bits in them." The freshers were made to down drinks if they didn't know the answer to quiz questions. 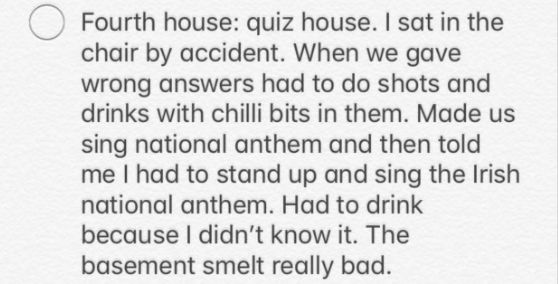 The theme for the fifth and final house was "salon". The girls had to dunk for beans, brussel sprouts and garlic cloves while having eggs and flour thrown at them. The first fresher's notes read: "Had to sit in a chair while someone massaged Vaseline into my hair and X brushed my teeth with garlic paste. I grabbed X's toothbrush and threw it down the alley and got drink thrown over me from that. Some chick also shaved my eyebrow." 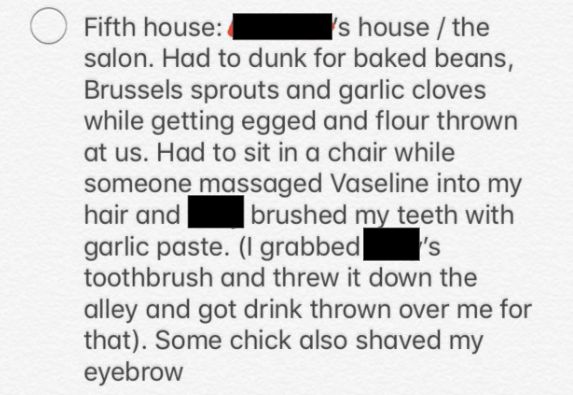 When speaking of the final two houses that she didn't attend, the second fresher said "So you see I was pretty well off. The last two houses were brutal."

A Loughborough University spokesperson told The Tab: “Thank you for bringing this to our attention. The allegations suggest behaviour that falls below the high standards expected of Loughborough Sport athletes and we have launched an immediate investigation.”

If you have any more information, please contact [email protected]