Only two per cent of people have the special ability

There are 400,000 CCTV cameras in London.  Across the UK, there are around 4.2million that capture our movements across cities and suburbs.

But CCTV doesn’t capture everything. Sometimes the footage is blurry; what if you’re wearing a hat or a hoodie and it’s dark? What about when high-end thieves or murder suspects try to cover their face on camera?

“Things I’d be looking at are the nose. This one bends to the side,” says Recogniser Detective Sergeant Eliot Porritt, pointing at a CCTV image on the screen. “It might have been broken. I’ll also be looking at the chin line, the hair colour and style. Even their build and expression.”

Porritt is one of the Met’s “super-recognisers”, a unit made up of police officers who virtually never forget a face – they recognise 95 per cent of the people they see. Whether it’s someone they’ve already arrested, or a mugshot on the wall, they can make positive identifications based on barely any detail. Those of us without this kind of memory can expect to remember just 20 per cent of the faces we see.

We scroll down through hundreds of images, some clear and others impossibly pixellated. There are helmets covering facial features and sometimes all the team have to go on is the flash of an eye or an ear. Super-recogniser PC Kenny Long is looking for a bike thief, rattling off the names of suspects he recognises. It doesn’t take long for him to find a match.

“I tend to trust my instincts a lot,” says Porritt. “Others will look at the features first – like an earlobe before anything else. Some see the face as one, and others smaller parts. “But it’s also about build, clothing and the way people carry themselves.”

As you’d expect, super-recognising is a long, manual process, that involves many hours staring at screens in a very standard room at the top of Scotland Yard. Officers are put to work on various crimes: from trying to identify shoplifters to sexual assault suspects. The small team started out as four and has grown to seven; they have caught 1,596 criminals since May. Each one has been tested by psychologists and classified officially as a super-recogniser.

The unit’s first proper project was the Alice Gross murder case. In 2014, the 14-year-old went missing on a stretch of west London canal. A huge search party of 600 officers went looking for her. Once the team of super-recognisers examined the CCTV footage, it wasn’t long until her body was found. The super-recognisers were also instrumental in identifying the suspect, construction worker Arnis Zalkalns.

“Academics say there’s a natural ability, and I do agree with that,” says Porritt. “Part of the brain is developed to remember faces, but you also need to apply it. I started identifying a lot of people, remembering suspects, and that’s how I got on the list.”

Dr Josh Davis, an academic at Greenwich University, works closely with the super-recognisers. He says that only one to two per cent of the population has this ability. They just don’t realise they have it. “I’ve had a few people contact me, asking if they can become a super-recogniser. One [read] another article I was in, [and] asked for a job,” says Porritt, laughing. “We do plan to introduce this, but it’s working out how.”

One of the ways to find out if you have the ability is submit to the Cambridge test. It starts off simply enough, but when you start seeing people from different angles with different hairstyles and images of varying qualities, it gets more challenging. 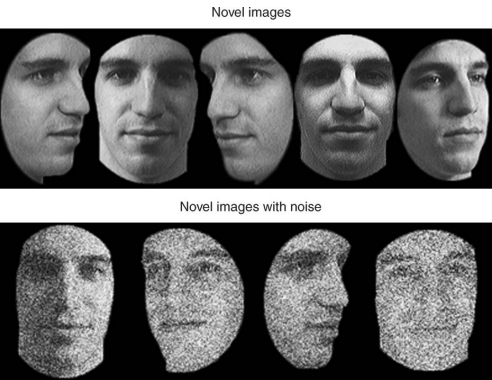 The Cambridge test asks you to identify faces from different photos

I’m shown two images. One is of a man in a dark motorcycle helmet, where only the eyes are visible underneath the visor. Another is a clearer photo of a suspect in custody.  To me, the only similarity is the eye colour. It does seem like there’s sufficient information for me to match them, but the super-recognisers identified them as the same person. The man was arrested not long after.

“We can work on anything where there is an image, said Porritt. “Theft tends to be habitual offenders – these people have previously gone undetected. They’ve appeared on CCTV but no one has ever linked them. Some have been convicted for more than 30 crimes.”

The Notting Hill Carnival is a big event on the police calendar. It’s also particularly important for the super-recognisers, who go out and spot gang members. “That’s where it is preventative,” Porritt says. “We can stop and search or ban them before trouble starts. I’ve covered two carnivals but we’ve been using officers there for four years. Others are football spotters. They go out on football days to spot risky fans.”

When 15-year-old Jessica Horton went missing in Bournemouth last Autumn, the super-recognisers were put on the project. No one had heard from her for a week. “They asked for our help,” says Porritt. “Rather than go down the next day we got there at 9pm and started looking straight away. We found her safe and well in four hours.”

“I was told I had the ‘ability’ in 2012,” explains Porritt. “I’ve always been good at remembering names and faces on TV – I used to remember actors and directors from films. I didn’t realise other people don’t see faces the same way. You almost assume everyone sees what you see.

“You’re sort of half looking for suspects on your way home. If I spot them, I have to call it in.”