It seems like Greek life can’t catch a break. Between faking cancer for donations, chewing off ears and withholding food from members, it’s no wonder nationals isn’t happy with their chapters.

Hazing, in particular, has become a national Greek life crisis. Thinly veiled as a bonding experience for new members, hazing has actually done the complete opposite of its said purpose and resulted in the expulsion of various chapters for excessive drinking and stripper nights.

But if it’s true that every cloud has a silver lining then we’ve found it: puppy pledging.

“Puppy Pledges” are the newest, purest form of hazing — and it has our seal of approval. The responsibilities of the puppy pledge are simple but imperative to house happiness.

This is the kind of hazing the world needs: a pledge that sends you 21 puppy pics in the span of an hour pic.twitter.com/Ntr5SbqP4X

Young men pledging fraternities everywhere are required to text a picture of a puppy upon anyone’s request. And If they don’t comply? Well, we don’t wanna know.

I'M LOVING LIFE!!! this pledge literally has to send me a pic of a puppy every day!!!!! get u a puppy pledge!!!! pic.twitter.com/byBZWvEEKr

As any good journalist would, we did a little investigating and tried it out for ourselves. Less than a minute after asking for a puppy from a pledge, we received this picture: 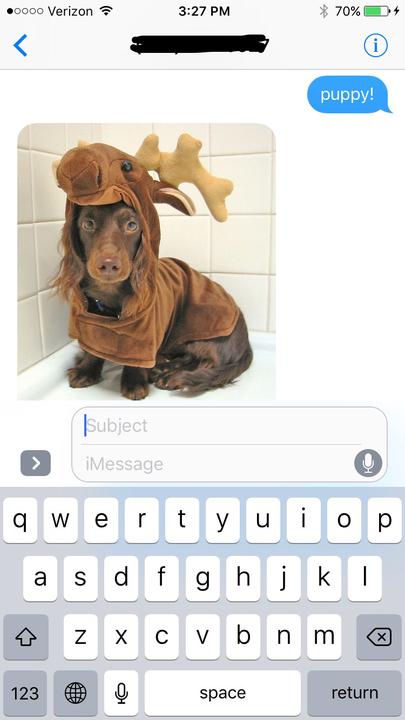 The pledge agreed to answer our most pressing questions regarding his duties as Puppy Pledge. In the past week, he has sent over 4000 pictures of puppies, most of them in the first two days of taking on the role.

"I do it because I have a passion for puppies," he said when we asked if he would have to do this for the entirety of his pledging experience.

Some frat kid was assigned as the puppy pledge and I feel blessed pic.twitter.com/Fiw0lYGNLv

He's not the only one with a passion for puppers. Puppy pledges have become popular on Twitter, and people from all over are posting pictures of the texts they've received from young men eager to enter Greek life.

there's a "puppy pledge" and he sends cute pics+fun facts of any animal that you want, so i texted him and he did not disappoint pic.twitter.com/g0W6BYciRS

The pledge told us that of the 800 pictures currently in his camera roll, around 300 of them are images of puppies ready to be sent to strangers at a moment's notice.

Puppy pledge of the week is the best pic.twitter.com/8nWw7BvjP1

Maybe it's time to rethink our opinions on hazing. But then again, maybe not.