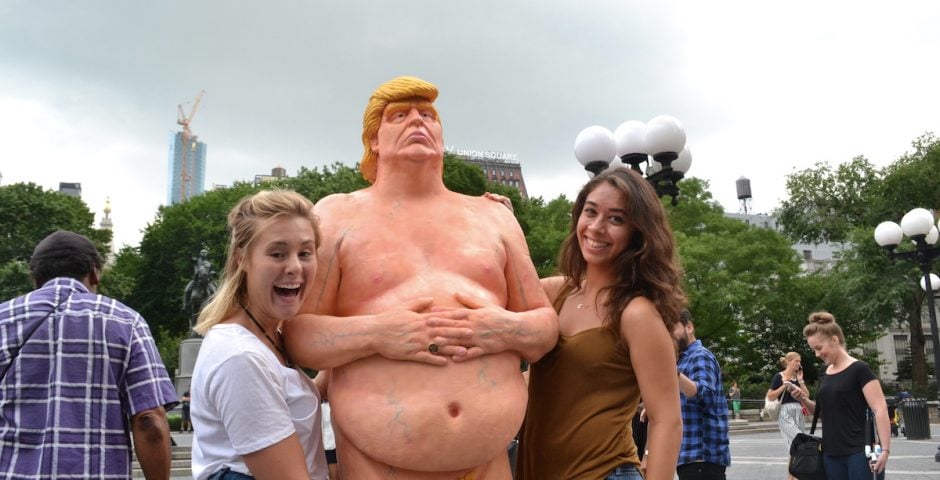 It’s an artwork called ‘The Emperor Has No Balls’

A crowd is gathered in Union Square this afternoon to see a graphic and detailed statue of Donald Trump naked.

As soon as news of the display was heard, people hurried to get their picture taken with the scandalous artwork entitled “The Emperor Has No Balls,” and indeed the statue depicts a small penis with no balls. 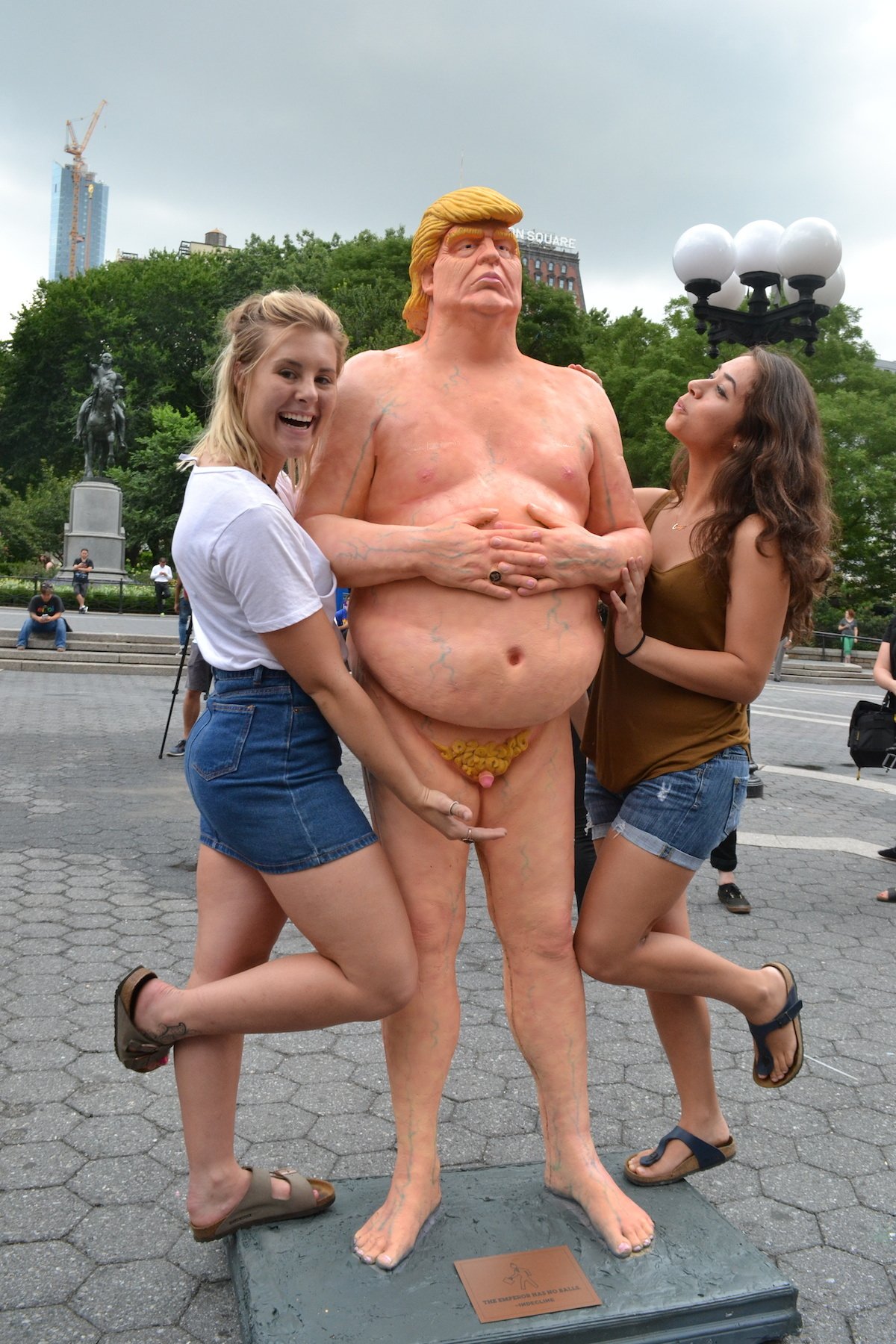 The piece is the latest project from the American Activist Collective INDECLINE and was created by Artist and Sculptor “Ginger.” The Cleveland based artist was chosen due to his talent of creating detailed and grotesque monsters in the horror genre.

In a press release by INDECLINE they explain that due to the project, Ginger has now become one of Trump’s most outspoken critics.

The reason behind the piece was to take a stand against “one of the world’s biggest potential threats” who began to “steal the hearts and minds of our country’s most malleable and in some cases, fanatical citizens.”

The statue is one of five life-size statues. The statues are being showcased in five major US cities. The reveal of all five statues occurred on the same day, at the same time and were documented simultaneously. 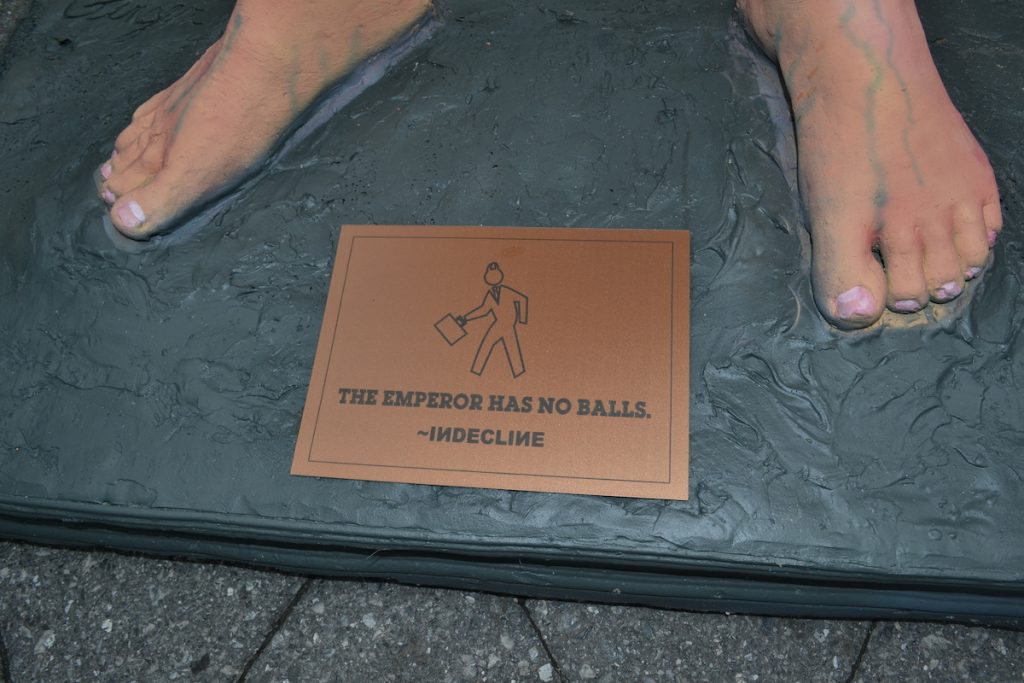 INDECLINE said the statutes required 400 pounds of concrete and rebar, 300 pounds of Monster Makers Oil Clay, and many other materials. The creation of the statues took well over 1500 hours in the course of four months.

We spoke to bystanders on the scene, most of whom thought the artwork was a hilarious and honest portrayal of the presidential candidate.

“I would just call the statue visionary and an accurate portrayal of what could come,” Scott, 23 said.

“I think it’s really funny and I hate Trump. I don’t want a fascist as president,” another observer said.

“I just don’t like Trump, I really don’t. I think this kind of embodies a lot of things I hate about him, like his cottage cheese ass,” one bystander said. 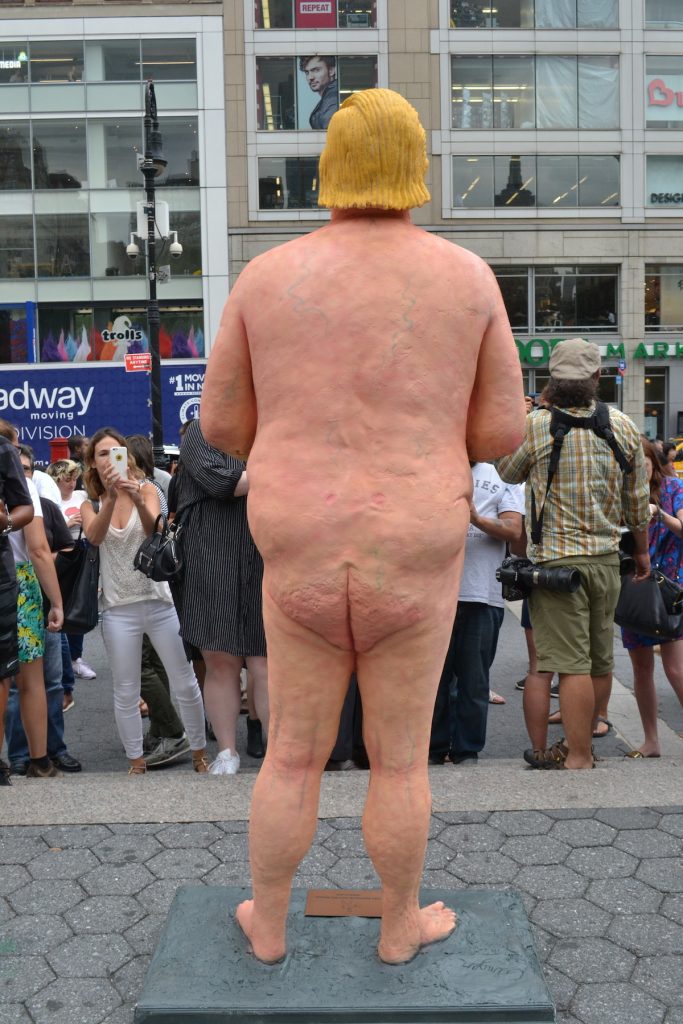 However, while many acknowledged the humor of the piece, a few believed that it was inappropriate and offensive.

“Would the same people be out here taking photos of a similar statute of Hillary Clinton, with her breasts hanging down below her waist, overweight, and stomach flapped out like that, would they still be out here taking pictures of it,” Sammy, 60, said. “Trump is the only hope for this country.”

Bystanders started making their own additions to the statue, such as a hat that read “Make America Mexico”, “#Donald J(K) Trump”, and “Madman”. 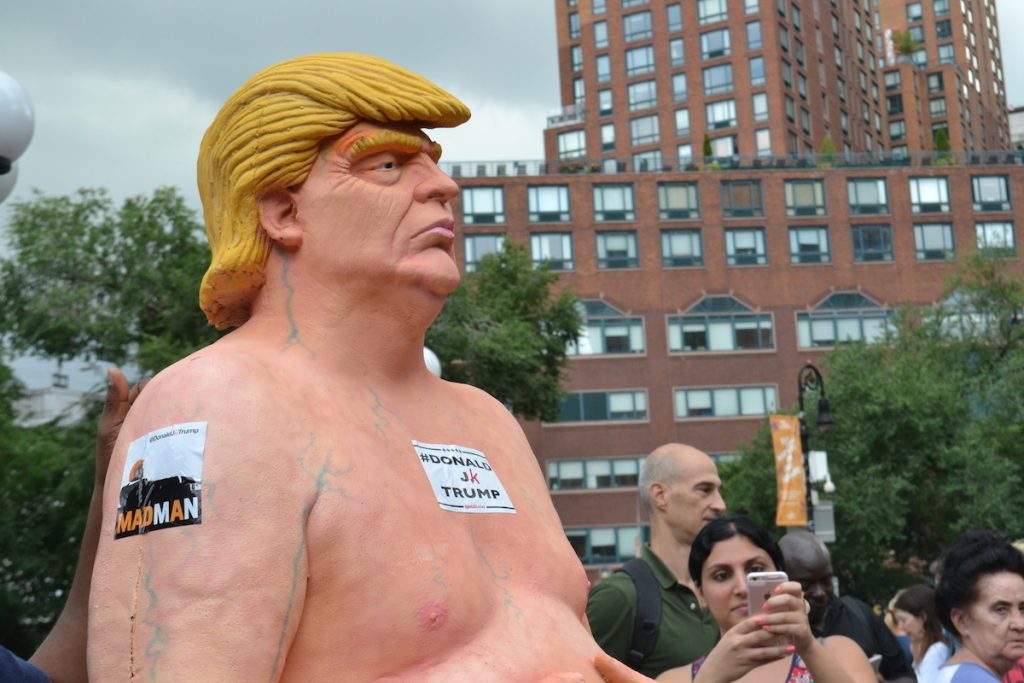 A city park employee said they are currently working to take the statue down. According to INDECLINE’s press release the removal of the statue is imminent.

“It would be highly probable at that point that these five statues would never be seen again,” INDECLINE said.

“These fleeting installations represent this fleeting nightmare and in the fall, it is our wish to look back and laugh at Donald Trump’s failed and delusional quest to obtain the presidency.”