Just seas and seas of Bernie or busters

PHILADELPHIA — As I crawled into the back of my Uber this morning and asked to be driven to City Hall, my driver laughed. “You’re sure you don’t want to go further North instead?” she joked, “might be quicker to head uptown and then walk back.”

Unamused and sweaty, I dismissed her comment and turned back to my phone to collect my thoughts before the long day.

Moments later, the car jolted and I looked up to see that there were streams of people walking in front of and around us. There were suddenly detour signs: every road had been re-routed and then re-routed again. The streets in Philly were packed beyond capacity, and it was only 10am.

This week Hillary accepts the Democratic nomination, and I thought people were finally ready to welcome both her, and the DNC, with open arms. Celebration was abundant, and for a moment, all of the DNC dust seemed to have settled.

I couldn’t have been more wrong. 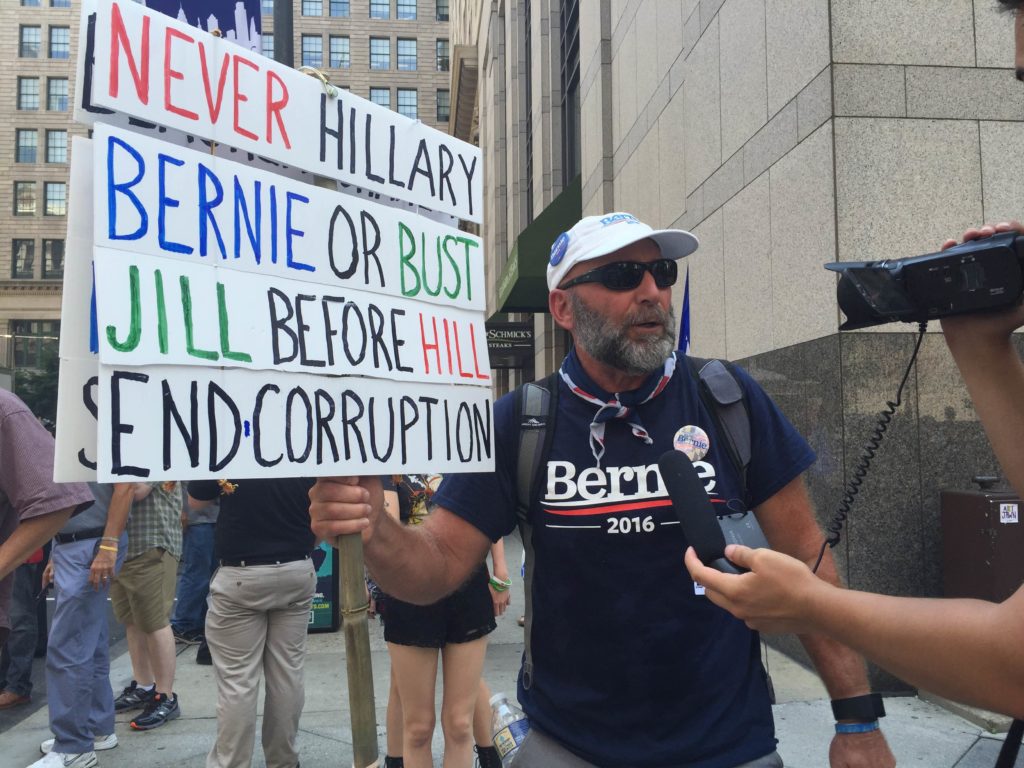 The streets here are not packed because Hillary will accept the nomination, but because Bernie will not.

If I didn’t know any better, I would have believed this was a convention for him. Heading down Market Street, I was unable to see anything but “Hill No” and “Jill before Hill” signs. Bernie hats and shirts are everywhere, while the only pictures of Hillary include a red line drawn straight through the face.

Intrigued, we took to the streets to talk to Bernie supporters. We hoped to find out why support for Hillary was so low, and to ask what Berniers really meant when they said “Bernie or bust.” 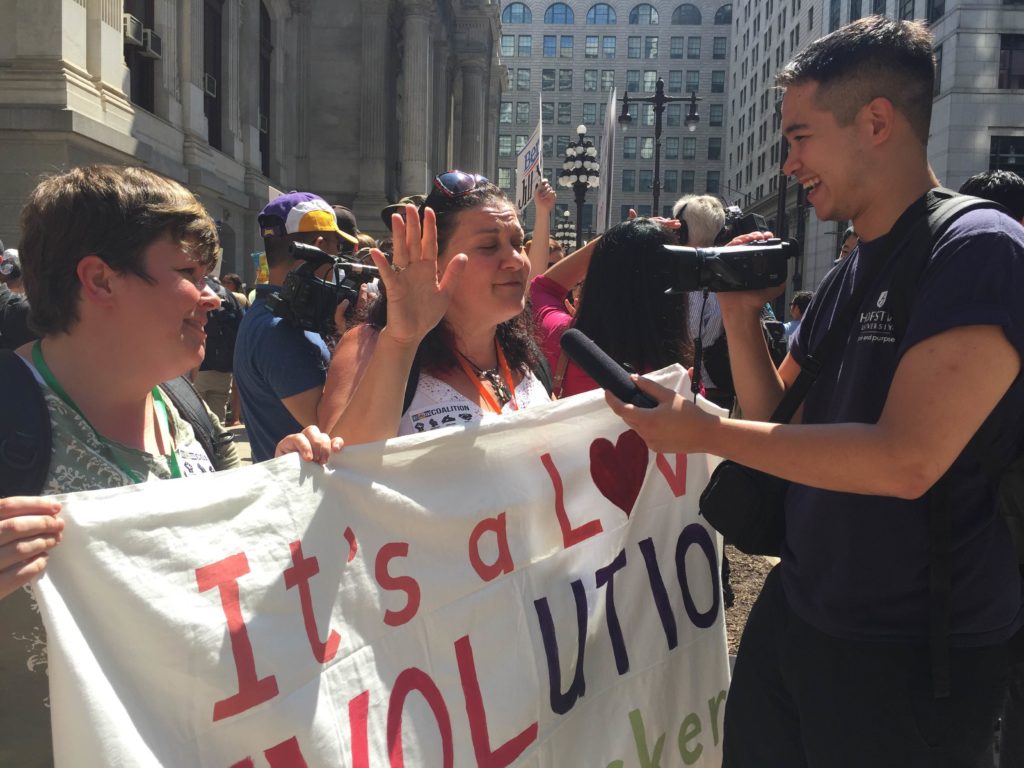 The number one question we were interested in asking was whether Bernie or busters would still vote once Hillary had accepted the nomination.

Having publicly backed her, it seemed natural more Bernie fans would be comfortable supporting Hillary, but we quickly learned for most that was not the case.

In fact, many Bernie fans told us with confidence that they would be casting their vote for Jill Stein.

“Are you worried that in voting for Stein, you will be taking a vote from the Democratic party, and placing the victory in Trump’s hands?” we asked.

“It won’t be my fault” was the number one response we received. “It will not be my fault – the DNC asked for this, and they will soon recognize the error of their ways.”

Not “I still feel I should vote my conscience,” or “I do not feel comfortable voting for her just because she has the Bernie seal of approval.”

This election has become a blame-game, and the DNC is the one “taking the hit,” as one protester told us. Many of these Bernie fans would rather see a Trump presidency than wound their pride, but when this happens, the DNC won’t be the only one taking a hit. 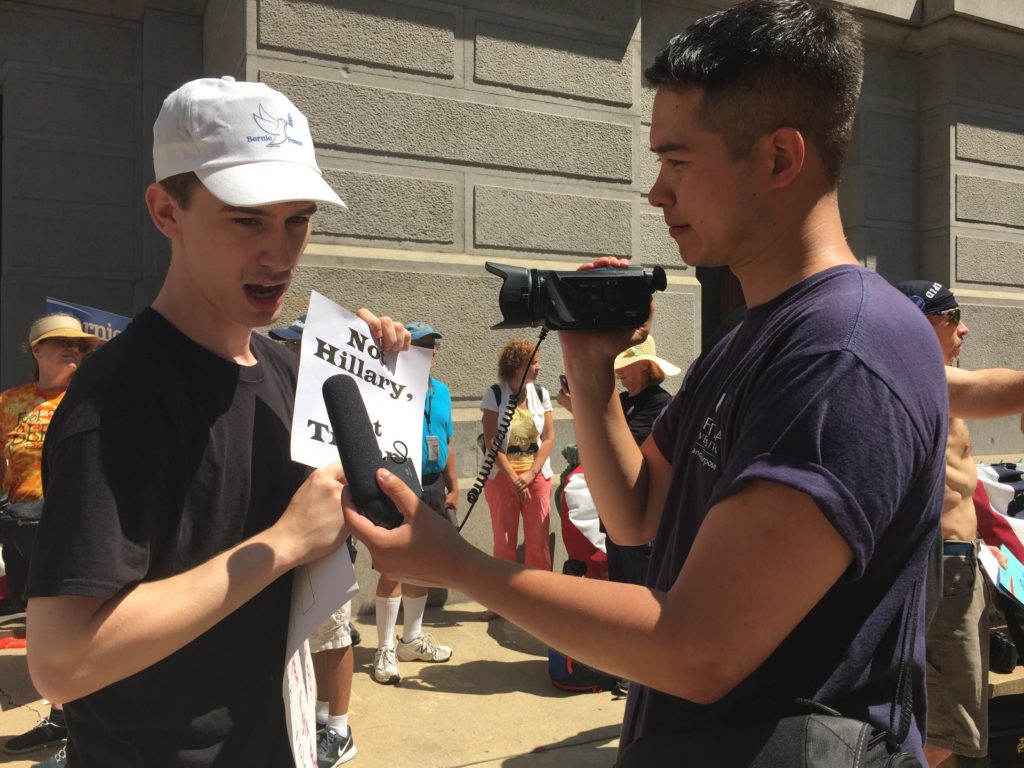 Democrats are still licking their wounds from the WikiLeaks scandal, and Bernie fans remain visibly bitter.

“Resigning from the DNC isn’t enough, you have to resign from Congress too,” one student at Temple told us when asked about Debbie Wasserman Schultz.

Another chimed in, talking as if to her directly: “You’re busted. What you did was awful, horrible, and wrong. Bernie deserved better, and you called yourself impartial and you weren’t.

“The American people will never trust you again.”