Meryl Streep is not the first celeb to impersonate Donald Trump

Yesterday, while everyone else was calculating and recalculating exactly how many votes Bernie Sanders needed to clinch the Democratic Nomination, Meryl Streep was playing dress-up with Shakespeare in the Park in New York City.

Wearing a fat suit, orange face makeup, the iconic red tie, and a wig, the Oscar-winning actress took to the stage to impersonate presidential nominee, Donald Trump, and it was glorious. 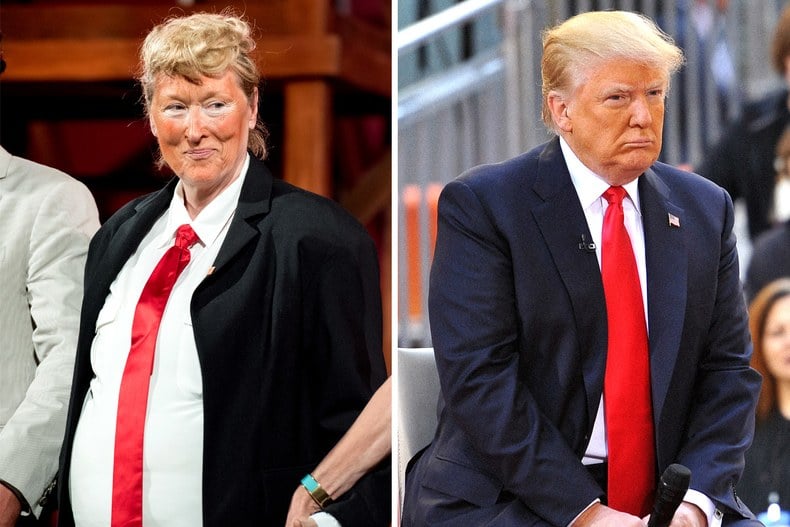 Of course, Meryl Streep is not the first celeb to impersonate Donald Trump. Since the beginning of his campaign, Donald Trump’s statements and actions have garnered attention from the media and he has become a main talking point on a variety of late night and comedy shows.  At this point, Donald Trump has been caricatured by pretty much everyone in comedy. Some of the impressions are great, some of them are cringeworthy — but sink or swim, the impressions are always enjoyable to watch. Here is a list of our top seven Donald Trump celebrity impressions.

Josh Gad of  “Book of Mormon” and “Frozen” fame, delivered a mesmerizing, hilarious, and only slightly disturbing Donald Trump performance on the television show “Lip Sync Battle,” in which he wears a skirt of money and makes out with himself, only after declaring his undying love for none other than himself.

Stephen Colbert doesn’t necessarily assume the exact role of Donald Trump, but he does assume Trump’s demeanor and mannerisms to talk about Trump’s campaign. He mocks the early stages of Donald Trump’s candidacy, and even though this impression was done very early on, it is still an accurate representation of the Donald Trump we have seen over the last year.

Dana Carvey nails the voice, but loses points for 1) not being in a costume and 2) failing to copy Donald Trump’s signature smirk. He also isn’t reading off a script, instead, he impersonates the Republican candidate by loosely quoting real things that Donald Trump had already said.

“We billionaires are tired of being treated like millionaires.” Just one of many, many golden lines in this bit. Caliendo is a professional comedian, known specifically for his ability to do impressions, so it shouldn’t be surprising that his Donald Trump impression is near spot on.

Saturday Night Live arguably does its best work during the election season, and with Donald Trump’s consistent stream of outrageous commentary, they’ve had a lot to work with this year. Darrell Hammond reprised his role as the Donald for SNL, and it’s every bit as entertaining as it was in 2005.

Kyle Dunnigan is a stand-up comedian, actor, and writer. Last summer, Dunnigan introduced his Donald Trump impression to Howard Stern on Sirius radio. What Dunnigan does so well is mimic the small nuances of Donald Trump’s voice, so much so that if I didn’t know any better, I’d think it was Trump himself.

Jimmy Fallon has never been known for his impressions, and instead has found success from his charm and wit, but his Donald Trump impression is fantastic. It is exaggerated in the best ways, and accurate where it needs to be.

Taran Killam filled in for Darrel Hammond on SNL, and so far, has done a great job filling Hammond’s shoes and Trump’s wig. Killam’s performance is obviously bolstered by the amazing work done by the writers at SNL, but it is brought to life by his ability to match Trump’s iconic duck face, and to parrot Trump’s voice.