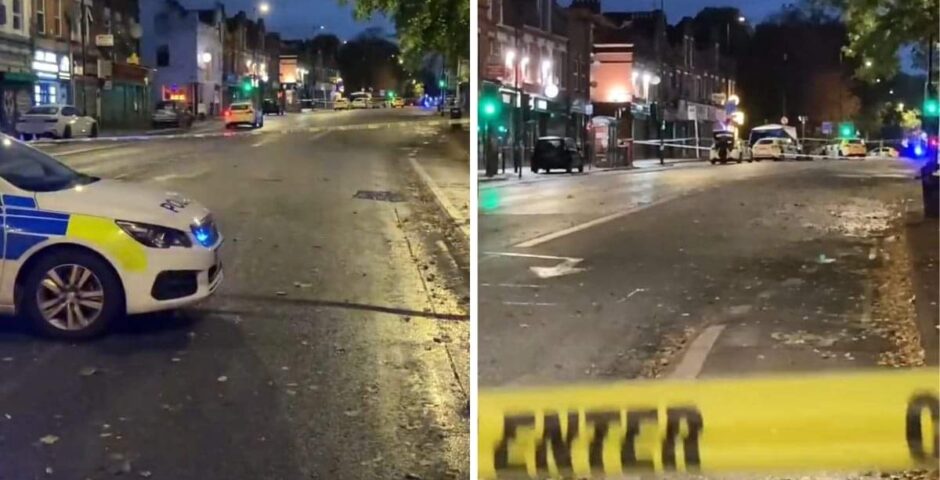 Students are being told to avoid the area

A man has been seriously injured with officers performing CPR at the scene on Wilmslow Road in the early hours of this morning.

Officers were flagged down to the incident at around 2am and the road in Fallowfield is currently cordoned off from the junction with Landcross Road to opposite Owens Park accommodation.

Footage shows two police tents within the cordoned area. A spokesperson for Greater Manchester Police said “an investigation is underway” and police are expected to be there for the rest of the day.

The nature of the incident has not yet been confirmed but a BBC reporter claims officers at the scene are “telling people there’s been a stabbing”.

UPDATE: At 6pm on Wednesday evening, Greater Manchester Police said the victim had died in hospital after being stabbed on Wilmslow Road. The 19-year-old Manchester Metropolitan University student’s death is being treated as a murder investigation.

Wilmslow road in Fallowfield is closed due to a police incident this morning. Officers at the cordon shutting the road between Moseley Road and Langley Road are telling people there’s been a stabbing. There are two blue tents and a heavy police presence. pic.twitter.com/Ea38a1FTlm

Students are being urged to avoid the area whilst bus services are being diverted along Dickenson Road, Birchfields Road and Moseley Road.

Detective Superintendent Neil Jones of Greater Manchester Police South Manchester Division: “”I know that people in Manchester, and particularly those in the Wilmslow area will be shocked and concerned by this incident.

“I share this concern and assure you that there is a dedicated team of specialist officers in the area who are investigating at pace to find the person responsible.

“Local officers will be patrolling the areas and I urge anyone with information or concerns to speak to those officers who are on hand to help and support you.”

This is the other end of the cordon outside Papa John’s and Kej’s. There is a bee bike on the floor covered in tarp. @MENnewsdesk pic.twitter.com/chA8Cdm4Z5

In a comment this morning, a spokesperson for the University of Manchester said: “A serious incident in the early hours of this morning occurred opposite Owens Park on A6101 Wilmslow Road with Greater Manchester Police and other emergency services attending. The road remains closed between Moseley Road and Langley Road, with a police cordon and diversions in place.

“Bus services have been diverted around from the route, and people are being urged by Greater Manchester Police to avoid the area. Buses will instead use Dickenson Road, Birchfields Road, and Moseley Road in both directions.

“We will update with further information in due course.”

Anyone with information should contact police via gmp.police.uk or 101 quoting 240 26/10/22. Information can be shared anonymously via the independent charity – Crimestoppers on 0800 555 111.

• Exclusive: We spoke to the former Manchester Uni student who threw soup on Van Gogh’s art