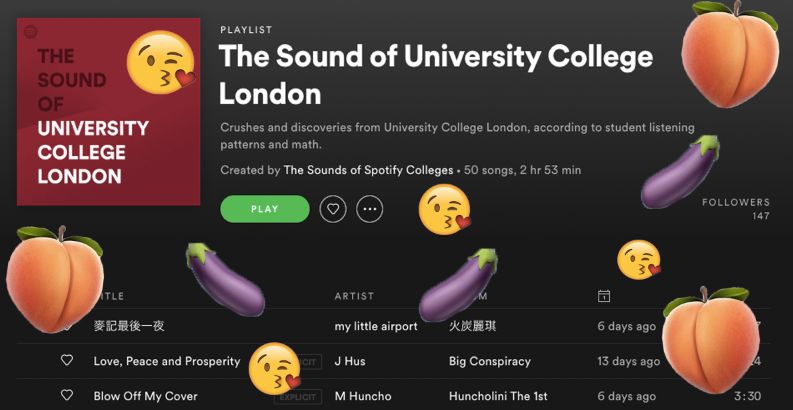 The Sounds of Spotify Colleges comes through again

With Valentine’s Day looming on the horizon, Spotify have come through with some absolute SEX ANTHEMS ready for you and your boo to cosy up to. They have created a playlist based upon the most listened to songs by UCL students “according to student listening patterns and math.” And if there’s one thing that makes a sex playlist extra sexy, it’s math.

Disclaimer: The songs might only be good for sex if you are high as a kite, much like the person who made this playlist.

Okay, let’s begin. So from a first glance a lot of the songs aren’t in English and the ones that are don’t look that familiar. BUT, BUT, that doesn’t mean they aren’t going to create pure, orgasmic madness?!

Lets start with song number one:

Honestly, no idea what these lyrics are about. Whacked them into Google translate – expecting this to be the Sweater Weather of Hong Kong. It really really wasn’t. The vibe we going for: a shag and cry motive?

Romantic? I think so ! 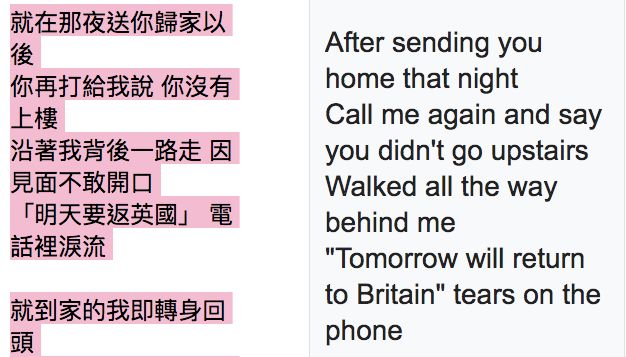 Now for a HUGE change in vibe:

Blow Off My Cover – M Huncho

Romantic message of the song: “I fuck her with ice on my whole wrist.”

Now if that’s not a turn on, I don’t know what is?

With some absolutely stellar lines like “She’s just a thot I fingered her cervix”, “Bitch tryna set me up she thought that I’d take off the rubber, yeah (take off the rubber)” and “She scratching my back, cat with some nails on it.” I don’t know what could possibly put you off having sex to this song?

Woooooo!!! More Indie! If you’re a worrier whether it be about: performance, size or technique during sex, this is the song for you.

“I worry ’bout you” is mentioned a solid 11 times. Isn’t it romantic to worry about your partner – especially during sexy time!

If your kink is making the bedroom feel like a techno club, this is a VIIIIBE.

Words can’t do this song justice, because there are no words!

This one is designed for focussing. They lyrics are SO repetitive that you cannot get distracted whatsoever. There’s a steady beat, one solid lyric (it carries the entire song), and a lil techno vibe. 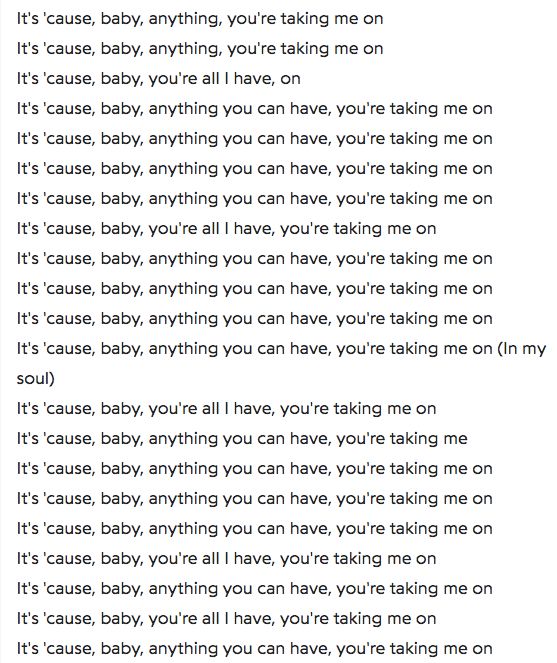 Wow, I am entranced

This song is the full blown proof that the playlist curator was on drugs when this was made. Do you like sex to feel like a journey? From the deep sea to the jungle to outer-space. That is what you will get with Pale Blue Dot. Prime sexual material.

For all your Mediaeval Historians out there this song will TURN YOU ON!

Pull my sword out your stone, Camelot.

Whilst I’m sure every man aspires to be the Arthur in this situation we don’t advocate the withdrawal method so keep those condoms on too!

And for the climax, after your shag which will be 2 hours and 53 minutes long (because you can’t afford to miss a single song on the playlist), you will finish on this spectacular number:

Sex is a beautiful act – but probably not if you bang to this playlist. To listen, the link is here. You have our highest recommendations.