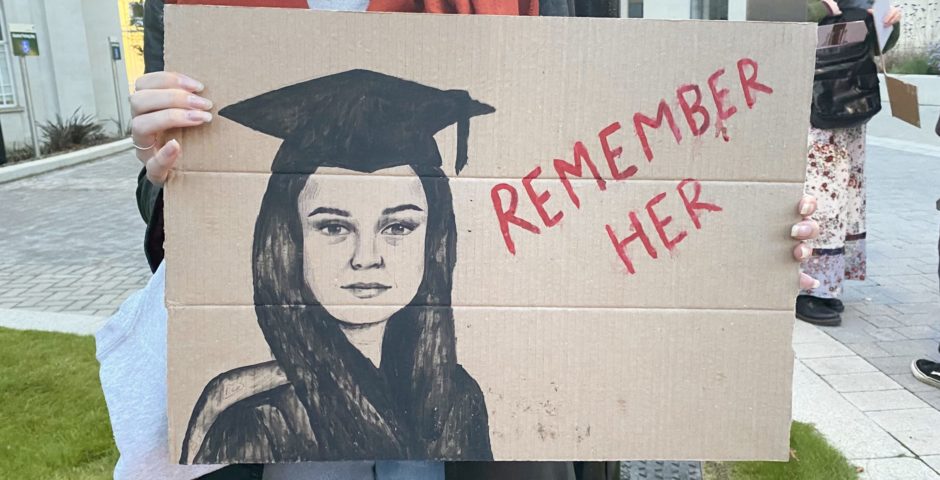 ‘Why isn’t violence against black and brown women treated the same as white women?’

Just under a hundred students congregated together outside the University of Leeds yesterday to honour the death of Sabina Nessa, a 28-year-old teacher who was murdered by a man five minutes from her home on the September 17th.

The vigil was organised by Reclaim The Night Leeds, an organisation re-founded in 2019, which originally came about in the 1970s as a response to the infamous Yorkshire Ripper and the nighttime curfew that was imposed on women by the police.

In addition to organising the vigil for Sabina Nessa, Reclaim The Night Leeds has previously orchestrated the ‘reclaim Headingley stadium alleyway’ protest and conducted an online vigil for Sarah Everard, who was also tragically killed earlier this year.

Starting at around 6pm, the vigil had four female speakers from different backgrounds talking about sensitive topics, such as sexual violence against women, the role of men in female activism, and how race has impacted the media coverage of Sabina’s death. 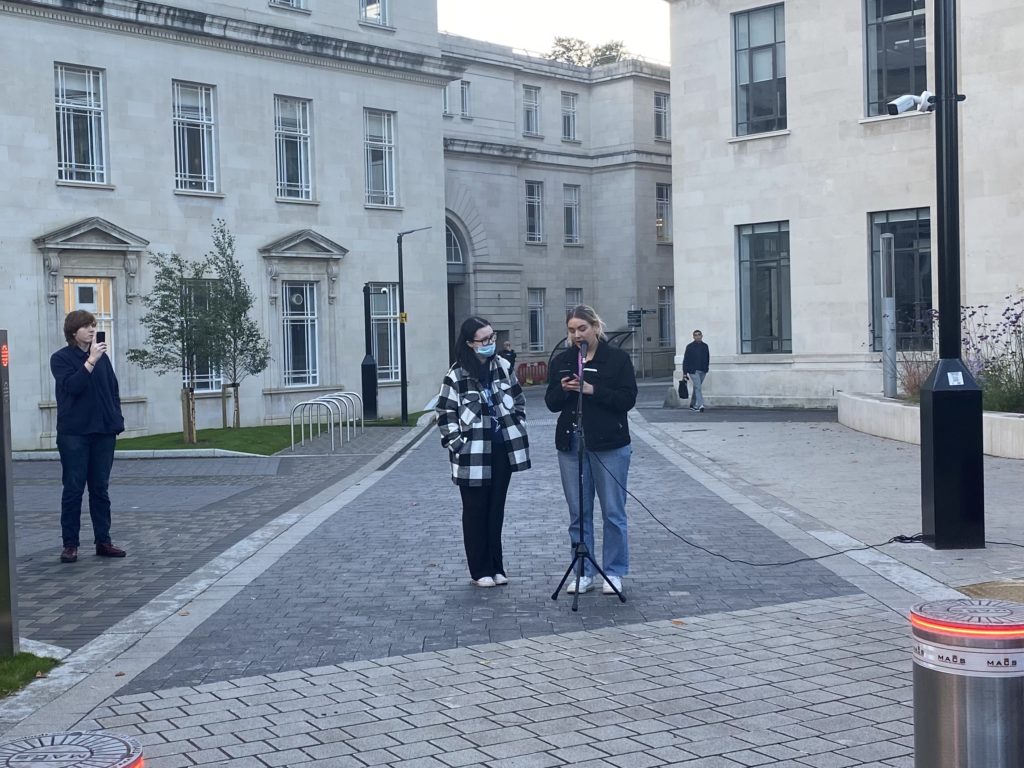 Many attendees were comforted by the fact that women of colour spoke at the vigil, with a very memorable speech given by Marvina Eseoghene Newton, the founder of Black Lives Matter Leeds. Marvina echoed the struggles of many, stating that she was “tired” of attending vigils and seeing “black and brown bodies dying and nobody crying about it.”

The uncomfortable truth that there were far less people at this vigil compared to the Sarah Everard vigil in Millenium Square (around seven months prior) was not ignored by the speakers as Marvina and counsellor Jo Gray (another WOC speaker) shed a light on the harsh reality of racism in “feminist” spaces. 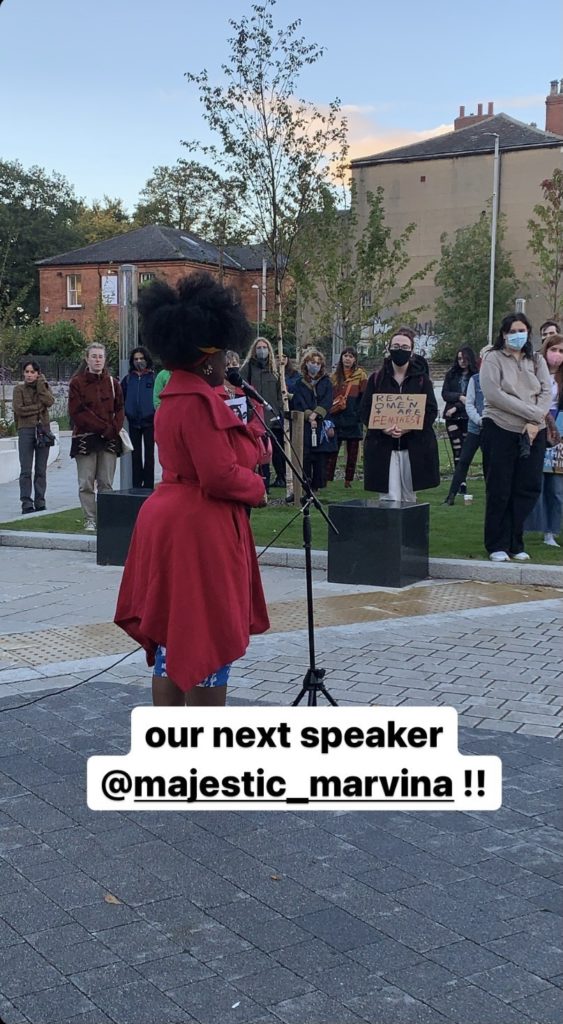 Another speaker giving her speech @rtn_leeds

Marvina particularly placed emphasis on the question: “Why isn’t violence against black and brown women treated the same as white women?” She stated that: “There would be more people coming out here in support of Sabina if she was white.”

Attendees noted the poor media coverage of Sabina’s death, in comparison to Sarah’s, which has recently been met with outrage on social media, with the major distinguishing factor between the cases being race.

This tiny piece on page 6 of today's Metro is all that's given to the death of #SabinaNessa. Cannot comprehend this. Such little coverage can only be down to the ethnicity of the victim. So wrong pic.twitter.com/0NWXvJLxuj

All of the speeches given by the speakers were incredibly moving. Sharon Slinger, a diversity and inclusion consultant, spoke about how Sabina’s “class of five year olds would never see her again,” conveying the grave impact that Sabina’s death has had on her local community.

Brittany Coffey, a member of Reclaim The Night Leeds, recited anonymous stories of sexual assault from women, imprinting the notion of just how commonplace violence against women is in our society. 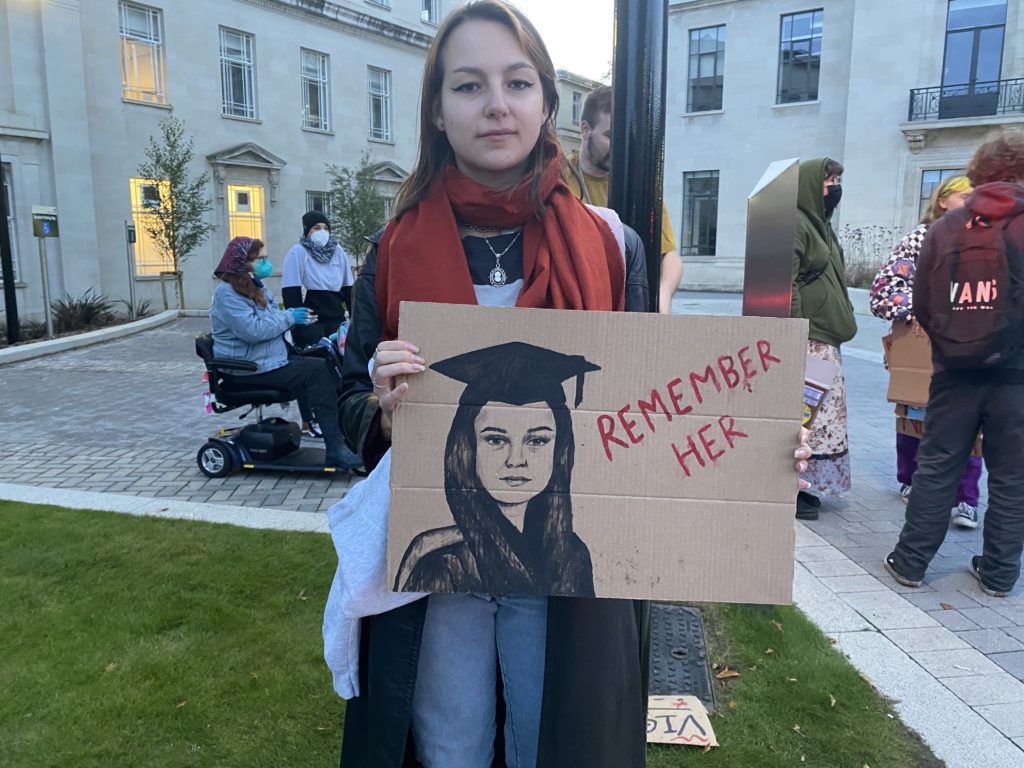 Attendee holds placard with drawing of Sabina Nessa on

The last speaker was an Equality and Liberation Officer at LUU. She wasn’t a scheduled speaker, but felt compelled and comfortable to share her thoughts on the messages reiterated by previous speakers. She called for more to be done in terms of government policy to protect women and spoke about her own insecurities in her job at the university, as her role involves themes being spoken about throughout the vigil.

The speakers finished at around 7pm, and to end the vigil attendees lit candles and placed placards on Parkinson Steps in honour of Sabina.

Throughout the event individuals nodded their heads in solidarity with the messages being spoken to them. 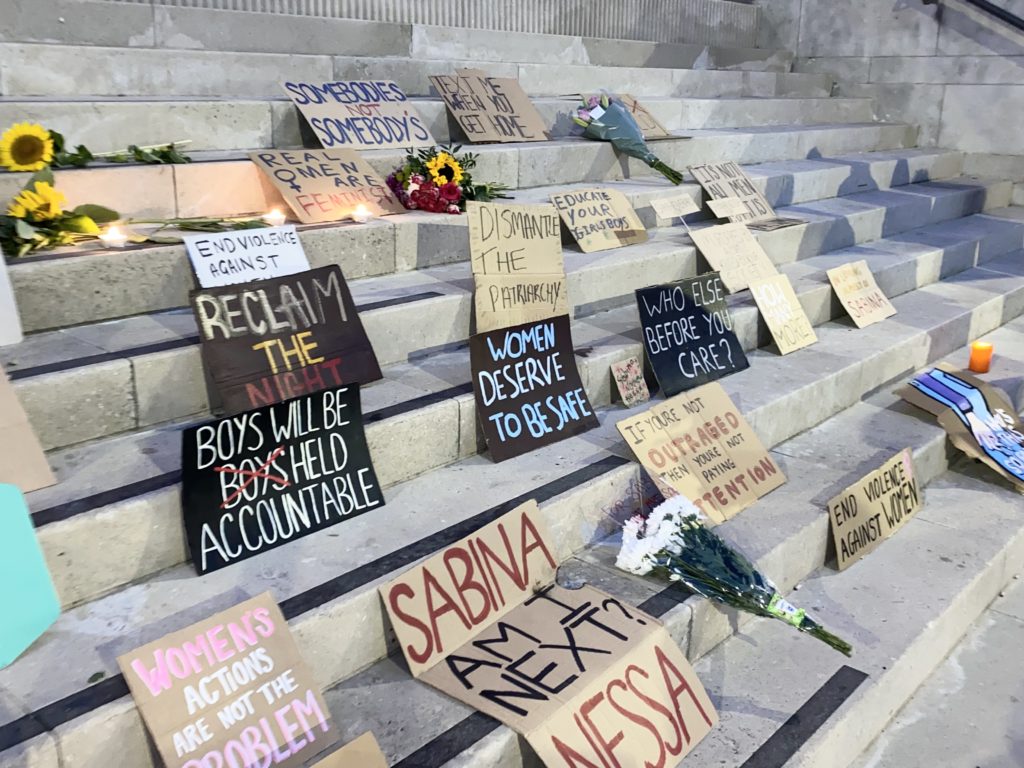 Ayesha, an international second year Law student told The Tab Leeds that she attended the vigil because she: “came from a country where violence against women happens too often” and whilst it occurs in the UK, “there are no vigils to commemorate these women at home.”

Amber, a third year Fine Art student also said: “Universities should offer more guidance and education in terms of women’s safety in Leeds” and that “a large amount of female students, including myself, don’t feel safe in Leeds, and the universities are oblivious to it.”

As the passive responses of men to women’s issues was a theme emphasised throughout the vigil, The Tab Leeds sought a male opinion on this issue.

Prem, a first year English and Film student stated that: “men should use their privilege to protect women, whether they’re in a club or walking home, if you have their consent you should help wherever possible. Women also do not need men to step in and be a saviour if they’re not wanted.”

Reclaim The Night also told The Tab Leeds: “The solidarity and power from people coming together to mourn and send love to Sabina and her family has been overwhelming. We cannot wait to carry this momentum further.”