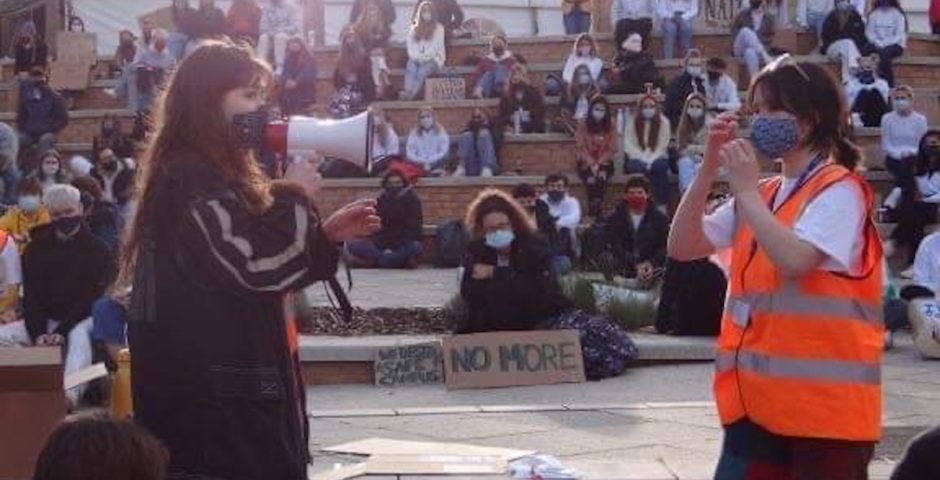 Sit Down N Shut Up is the group set up by three Exeter students who organised a sit-in outside the Forum on Monday afternoon protesting against sexual assault and harassment, particularly on campus.

The Exeter Tab spoke to these women about their aims and reasonings behind creating the group. Here’s what they had to say:

Organiser Alice says they have had 230 testimonies from Exeter students sent to their Instagram page @sitdownnshutup_. Alice said: “It’s very overwhelming, the amount of people that have contacted us who didn’t know that they were raped or sexually assaulted until we were putting up people’s responses and confessions and stories and people were like, oh that happened to me, I was raped.

“And people didn’t know they were living with this kind of guilt and shame, that this had happened to them, and they were blaming themselves”.

The decision to stage a protest against sexual harassment and assault on campus comes at a time when discussions around women’s safety are making national news, following the killing of Sarah Everard. The team emphasise that, whilst this has been a trigger cause for their movement, they are putting the experiences of women on campus at the heart of their message. Alice says: “On campus, the whole of this year since September there have been so many assaults, so many horrible things that have happened to women here, and not many people know about it, or if they do know about it it’s suppressed and we don’t talk about it”.

“Because the Sarah Everard case was gaining so much popularity on social media, we just thought, this is the perfect time to use this, all this anger, where is it going to go?”

Yasmin says: “I didn’t want this to be just another thing where this was just performative activism, where people just post a bunch of stuff”.

Their decision to organise the sit in also coincides with the news that three men have been detained and released on bail for sexually assaulting two women on this campus. An email from the Vice Chancellor was sent out on Friday in response to these assaults, but the group express disappointment that the university’s response to incidents which took place on the 7th of March did not happen earlier, as they say this would show greater concern for the effect these and other assaults have had on women across the university. 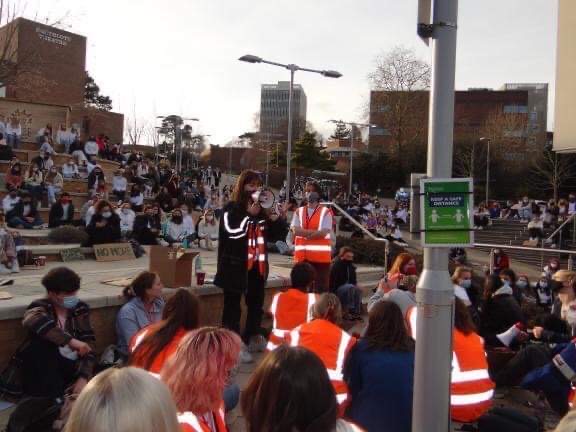 The group want more awareness about the fact that assaults and rapes do not only occur at the hands of strangers, but much more commonly with trusted friends of victims. Jaime tells us: “Rape can be done by your friends. It’s not a stranger down an alleyway, rape culture is not going away”.

Yasmin adds: “I can’t walk through campus at night. I’m so sick and tired of feeling like I have to be on guard to like defend my life, for me, even during the day I can’t walk into town by myself, because I could still bump into my rapist, and I have”.

The women want to encourage students to take a stand against rape and assault within their own social groups, but feel hopeful that the culture around campus is changing. Alice says she notices “there is more of a discomfort now when rape jokes are made, rather than brushing them off, and I think soon, the more that we talk about it and the more that we spread awareness of this issue, the more likely it is that men are gonna call it out and they’re not gonna be friends with rapists”. 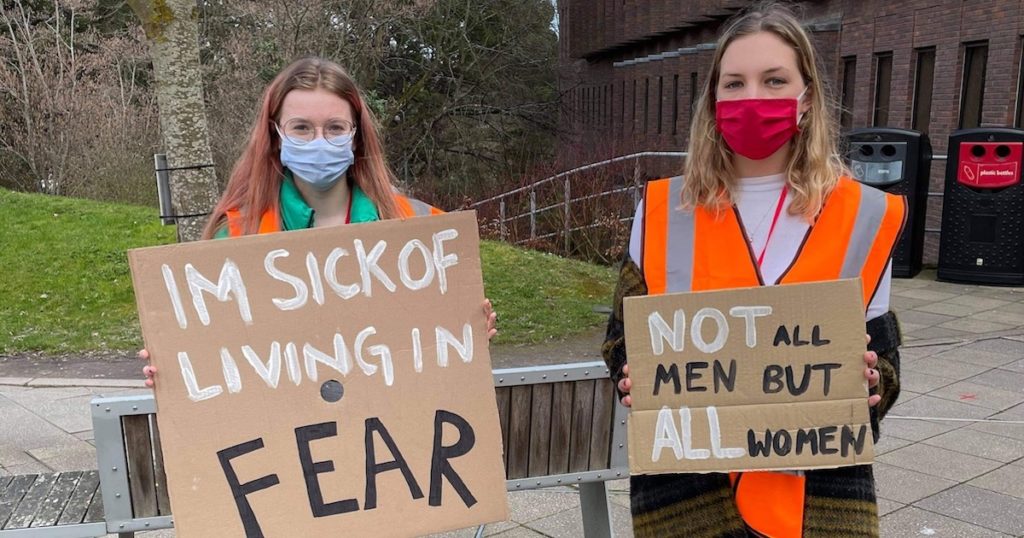 The group hope to empower women across the uni to speak out and have their experiences taken seriously. Jaime says: “Giving people the confidence to be able to speak out, and believing people rather than being like ‘he didn’t mean it, he’s just a friend’ like no, people being able to speak out and say this is rape, and understand they have been raped, so I think its just starting the conversations like that”.

Alice discusses the choice of naming for the group, saying: “I initially came up with this name [Sit Down N Shut Up] because we will be sitting down and we will be wearing masks, so that was quite a literal interpretation of it.

“But I think it kind of turned into this thing where it’s incredibly important for people to hear our stories, so it’s just like sit down, shut up and actually listen to us for once and don’t ignore us, don’t dismiss our experiences”.

In terms of changes that the team would like to see from the university, they specify that they want more consent training and more awareness on what consent is. Alice adds by saying the group want “an element of the Wellbeing Team to be purely for sexual assault seeing as it is 97 per cent of young women who have been sexually assaulted. It would be great if there was more available to us, more resources, more ways for us to get help”.

In our discussion, a lack of clearly signposted resources for those who have been sexually assaulted was a recurring issue. Yasmin and Alice both reported needing to wait months for therapy after they experienced assaults on campus.

The women emphasise how invaluable organisations like SAFE are to survivors, but that they only realised this support was available when they began working together to prepare for the sit in. “They were amazing, but before that we did not know who they were, and it’s just shocking”, says Jaime. 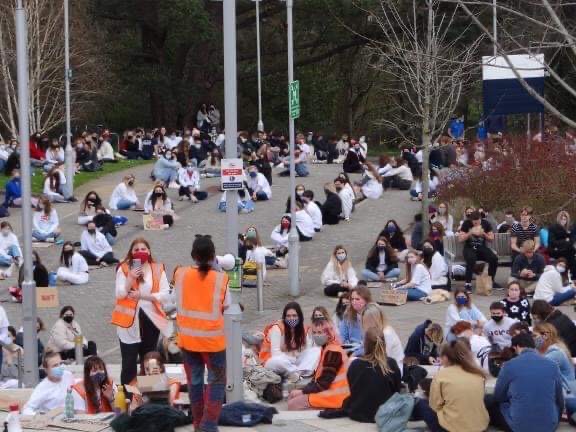 A spokesperson for Exeter University said: “The safety, security and wellbeing of our students is, and always will be, our primary concern.

“We have put in place a wide range of safety and support measures in recent years, improved our policies and reporting system and we will continue to work with students, colleagues and community partners to tackle misogyny and violence against women – this includes a special session of the Provost Commission in April on our collective role as a community and institution.

“It is critical that we continue to support each other and work together to keep all members of our community safe and feeling safe. We encourage all students to report and get the support they need through our Exeter Speaks Out web pages as well as our wellbeing support for students and staff or the Students’ Guild Advice Service or the Students’ Union Advice Service.”

If you’ve have experienced any of the issues raised in this article and are in need of support, please use resources listed above or reach out to https://www.safe-services.org.uk/ or https://www.exeter.ac.uk/speakout/