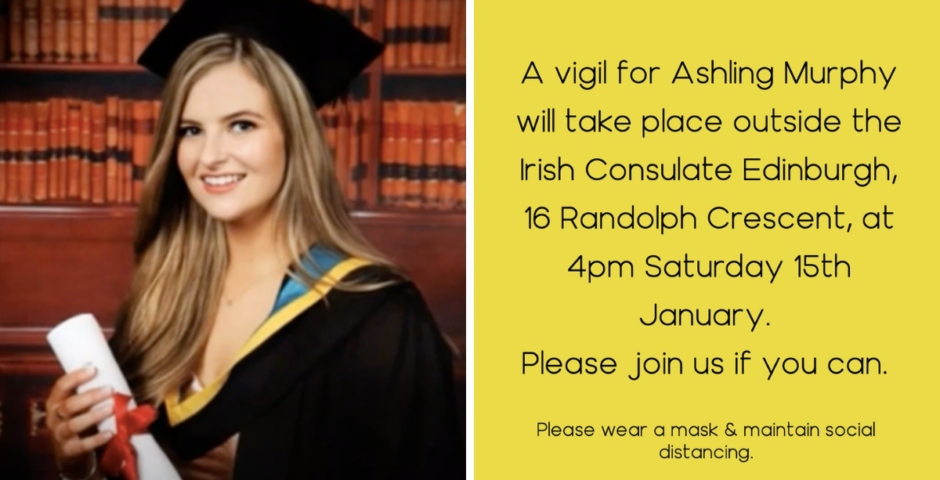 A vigil for murdered teacher Ashling Murphy has been organised for tomorrow afternoon at 4pm outside the Irish Consulate at 16 Randolph Crescent in the West End.

The 23-year-old primary school teacher was murdered in Tullamore, Co. Offaly in the Republic of Ireland whilst jogging on Wednesday afternoon.

Gardaí (Irish police) believe Ashling was attacked randomly by a stranger at 4pm during daylight hours.

Organisers hope the vigil will provide a space to express “our grief and anger at the loss of Ashling who was a beloved teacher and musician.”

Ashling’s death follows high profile murders of women by men they did not know – including the killing of Sarah Everard by Wayne Couzens, a serving police officer who detained her with his police badge.

It has sparked an outpouring of grief and frustration amongst women – both in Ireland and across the world – with the hashtag #SheWasJustGoingForARun trending on social media.

Vigils have already been held across the island of Ireland – including in Dublin, Belfast, and in Tullamore where Ashling was murdered. There are several vigils planned elsewhere in Britain at the same time as the Edinburgh vigil – 4pm – designed to coincide with the time Ashling was murdered.

The Murphy family are “appreciative and overwhelmed by the national outpouring of support show to them,” and have requested “privacy, space and time to process Ashling’s death”.

Ashling taught 1st class (ages six to seven) at Durow National School in Tullamore. She had been teaching at the school for less than a year and her headteacher described her as “fantastic, beautiful, and extraordinary sportsperson, Irish musician, choral conductor and inspiration.”

She played the violin and was active on the Irish folk music scene.

Gardaí are currently appealing for witnesses, asking anyone with knowledge of a “Falcon Storm mountain bike” with “straight handle bars” and “distinctive yellow/green front forks” to come forward.

They have also been unable to release her specific cause of death or the results of her postmortem examination  for “operational reasons.”

The Edinburgh Tab spoke to Debbie Murphy, an Edinburgh resident, who has organised tomorrow’s vigil. She told us: “We stand with our neighbours in Ireland and the Irish community in Scotland in expressing our grief and anger at the loss of Ashling who was a beloved teacher and musician. We’re holding this vigil to show solidarity and support to Ashling’s family and friends at this tragic time.

“Flowers and candles can be left and we’ll be collecting entries for a book of condolence. If you attend, please wear masks and observe social distancing”

Recommended related articles by this writer

• This is everything we know about the murder of Ashling Murphy