David Miller is a sociology professor at the University of Bristol and for the past year and a half he has taken up far too much of my attention.

You might have come across him – his comments on Zionism and the Labour party, and the controversy that followed, are covered in the national press. He appeared at events alongside outcast former Labour MP Chris Williamson, and has also claimed the White Helmets were responsible for chemical attacks in Syria.

Since last January he has been brought up in roughly every other JSOC (Jewish society) committee meeting. Why? Because some Jewish students have been feeling intimidated by what he’s been teaching for months.

Miller has a history of controversial comments about Israel and Zionism. In 2018, at UCL, he argued that accusations of anti-Semitism in the Labour party are “mostly false”. Yet according to a 2017 YouGov survey, 80+ per cent of British Jews believe the Labour party tolerated anti-Semitism. At the same event he claimed the reaction of some Jewish students was a result of “propaganda which they have been schooled with”.

In June, Miller accused Keir Starmer of receiving “Zionist money” and resigned from the Labour party because of  the “Zionist movement”. The idea that Jews or Zionists are using their money to manipulate politics is a trope as old as time. Miller says he is “simply describing the facts” and that a donor to Starmer’s campaign, Trevor Chinn, is “arguably, de facto one of the most senior officers in the UK Zionist movement”.

His lectures in his “Harms of the Powerful” module have made some Jewish students feel increasingly uncomfortable and unwelcome in his classroom.

These are some of the slides from Miller’s lectures. When I was first sent them, I was taken aback by how much they reminded me of tropes I’ve been confronted with for years.

In this first slide Miller accuses the “Zionist movement (parts of)” of being one of the five “pillars of Islamophobia”. Zionism, defined as the belief that Jewish people have a right to statehood in their ancestral homeland, has nothing to do with Islamophobia and everything to do with Jewish self-determination. 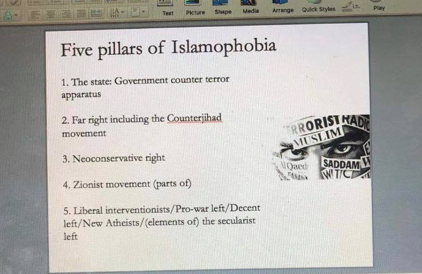 In this slide, Miller attempts to link various British Jewish organisations to the state of Israel. As a Jewish student, this conspiratorial spider’s web of arrows and organisations is grimly reminiscent of anti-Semitic tropes where Jews are accused of having unique power and influence over political affairs.

Miller claims it is “untrue and defamatory” that the slide, which shows arrows and connections between various Jewish organisations and the Israeli government, does in fact attempt to link Jewish organisations to Israel. Instead, he says it examines the “British Zionist scene” in context, saying plenty of the organisations are based in the same building in Jerusalem. 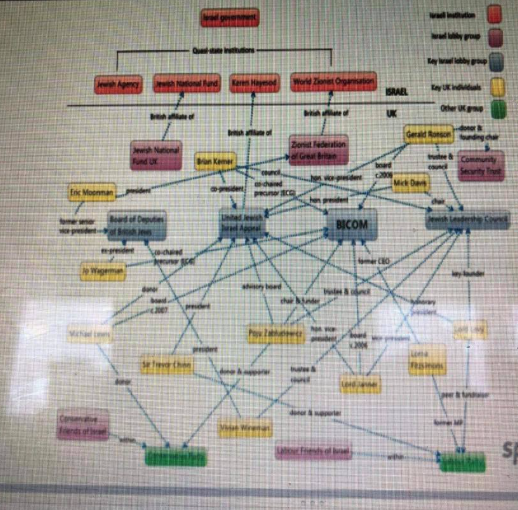 In this slide, Miller says charities like the Community Security Trust (CST) are part of this invented malign and powerful “Zionist movement”. Miller claims a number of organisations are in fact “formal members” of the Zionist movement. 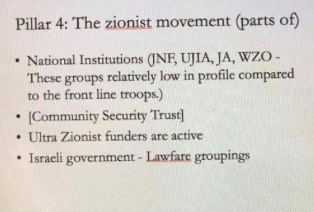 He has also claimed that the CST “is an organisation that exists to run point for a hostile foreign government in the UK. Rather than being funded by the British state, it should be under investigation for its ties with the State of Israel.”

He claimed it is “a straightforward story of influence-peddling by a foreign state. In particular, a state that has tried to dictate the outcome of the past two general elections, and by any yardstick, succeeded to a great extent.”

The CST has branded Miller’s comments “disgraceful and dangerous” and has made a complaint to the University of Bristol.

From personal experience, I can confidently state that the CST has literally nothing to do with Israel. It has never helped manipulate the outcome of a general election and it is not peddling influence anywhere. The CST is a charity that protects British Jews from anti-Semitic attacks.

They taught me the safest way to hide under my table at school in case of a terror attack, they supported me whilst I was subjected to horrendous verbal and online anti-semitic abuse, and they guard my Synagogue every week without fail. 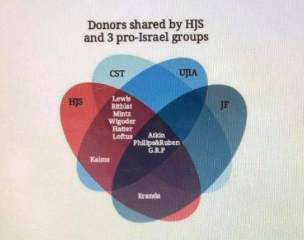 In response to questions for this article, Miller says: “The ‘hurt’ and ‘discomfort’ complained of by students, whether genuine or manufactured by campus-based lobby groups, cannot be used to prevent the teaching of the links between various political ideologies and activities.”

He added that he believed this article was part of a series of orchestrated attacks to stop him teaching about “the important relationship between Zionism and rising Islamophobia”, and amounted to “an encouragement of anti-Muslim racism”.

Defending the slides, David Miller told The Sunday Telegraph: “I don’t teach conspiracy theories of any sort” adding that it is “simply a matter of fact” that “parts of the Zionist movement are involved in funding Islamophobia.

“It is a matter of public record that Islamophobic organisations and movements are in receipt of funding from specific groups and individuals. Some of these are also prominent in the Zionist movement.”

Despite the concerns of Jewish students, Bristol hasn’t taken any public action

Despite complaints sent to the university over a year ago, Bristol Uni has found no wrongdoing and he still holds a teaching position at the university. In dismissing the complaint, Bristol Uni said the lecture did not contain any material hostile to Jews, and so was not anti-Semitic.

In response to questions for this article, Miller called the complaint “an example of the significant number of fraudulent antisemitism complaints which have been all too common in the febrile atmosphere encouraged by supporters of the Israeli state.” He says the complaint was rejected, and added that the UJS, who helped submit the claim, is a “formal member of the Zionist movement”.

I can personally reassure David Miller that my complaints have not been “manufactured by campus-based lobby groups”. I am genuinely tired of having to share a campus with somebody who, in my view, spouts debunked conspiracies about Zionism. As a committee member of JSOC, I know how exhausting this has been for those who are forced to sit through his lectures.

In my role as Campaigns Officer of JSOC I have listened to the concerns and fears of Jewish students. I have watched with frustration as the University of Bristol has time and again failed these students. I hope that Bristol will take this problem seriously.

With that in mind, I’ll make one final plea to Bristol: Get David Miller off of my campus.

In response to questions for this article from The Bristol Tab, UoB refused to say if it had received complaints about or investigated David Miller, citing legal reasons. It said it would, hypothetically, look into any complaints “in the context of the IHRA definition of anti-Semitism which we adopted in December 2019.”

UoB said it “has an obligation to uphold freedom of expression” and would work to “widen debate” in line with ECHR recommendations. “Our aim is therefore to encourage respectful debate,” a spokesperson said.

Bristol University also said it takes welcoming all people “very seriously” and urges anyone “who feels that they have been discriminated against or subject to hate speech or harassment, to contact our support services, use our online Report and Support tool or make a formal complaint.”

QUIZ: What percentage Stoke Bishop are you?