You’re not being edgy, you’re just being a dick: Calling time on Sleepy UoB

They’re only sorry they got caught

Like any self-respecting UoB student with a rampant social media addiction, for me, Fab N Fresh is a refuge from the impending doom of deadlines and oncoming onslaught of exams. There's nothing like the mild entertainment offered by the humdrum of Selly Oak living to distract you from the three assignments you have due.

And so, whenever Fab N Fresh is used for anything more serious than a lost student ID and, my eyebrows are automatically raised.

Last Sunday, a student posted about the Instagram account @sleepyuob, publicly calling it out its "sick" and "racist" posts. Immediately, I was taken aback, and soon my shock turned to genuine disgust – 'jokes' such as these have no place on our campus. 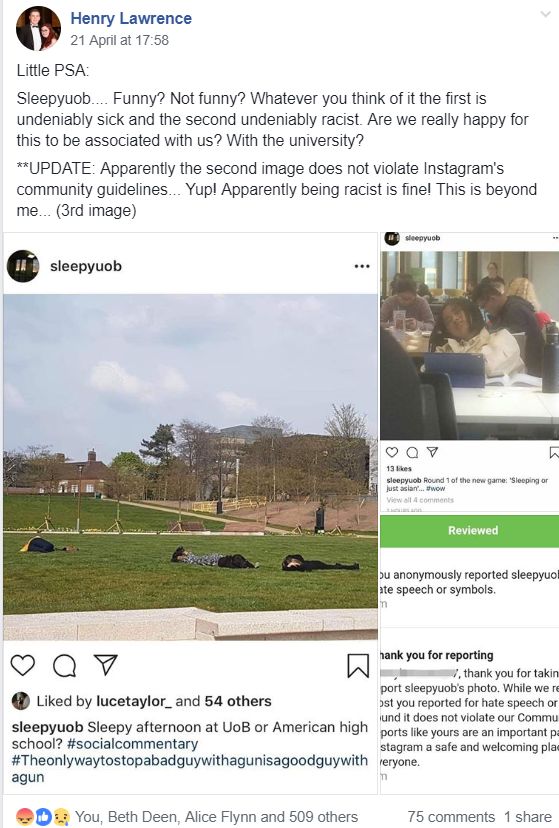 Why are you taking photos of students in the first place?

The Instagram account photographed pictures of sleeping students around campus, accompanied by (supposedly) funny captions – one Old Joemance described it as giving "us some sanity during exam time". However, there are countless things wrong with posting photos of chronically exhausted students, in order to generate cheap laughs.

Legality aside, taking pictures of sleeping people without their permission and then posting it publicly is morally bankrupt. For those with body image issues, this could be massively triggering, and for some, there are religious or social reasons for keeping their image of the internet. This account is the real-life iteration of my worst nightmare; there's a huge difference between someone posting the occasional selfie on their Instagram as opposed to being snapped mid-power nap, after their eighth straight hour at the library.

Problematic jokes aren't as cool as you think they are.

And then we turn to the captions, and this is where the fundamental issue lies. I'm going to say it loudly for the people in the back: ?you're? not?being? edgy ?- you're just being a dick.

I enjoy satire and 'taboo' comedy as much as the next gal, but this account is neither. Instead, it's simply a venomous outlet for the poster's own god-awful humour, hiding behind the anonymous mask of a public account. None of these captions have a punchline, and it's blatantly not a clever satirical takedown of actual racists, or an ironic commentary on gun law legislation in the US. Instead we're left with a handful of vile statements, and we need to stop legitimising this level of vitriol with our double taps. 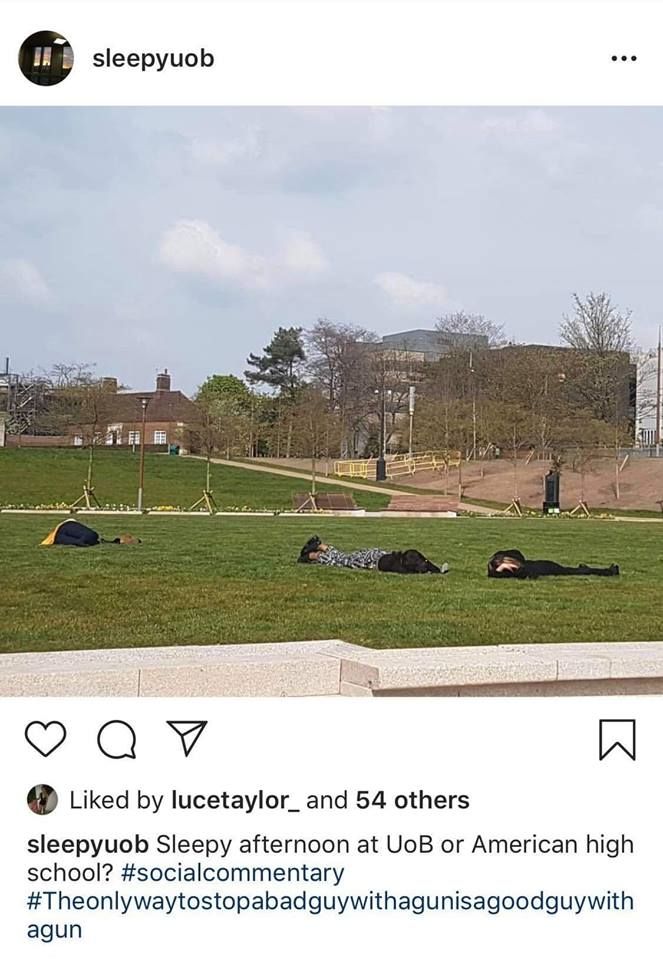 Call me straight-laced, but I struggle to laugh at school shootings, not when there's a "bad guy with a gun" every 12 days in the US. And considering the current political paradigm, and what happened in Christchurch, I feel like it's deliberately obtuse to trivialise these tragedies, just to get a reaction.

Do I really have to tell you that racism isn't acceptable?

And then the second image posted – cue the collective sigh of anyone who… well, anyone who isn't a racist, really. It's a pretty low bar, and so it's astounding thats someone could be ignorant enough to believe that this is prime-time comedy. There are an abundance of activists more qualified than myself to explain why it's the no longer a joke, but needless to say, making fun of "Asian"eyes is a dog whistle for a deeper racist mentality.

Neither of these 'jokes' are new, and nor are they original, so why are we still making them? 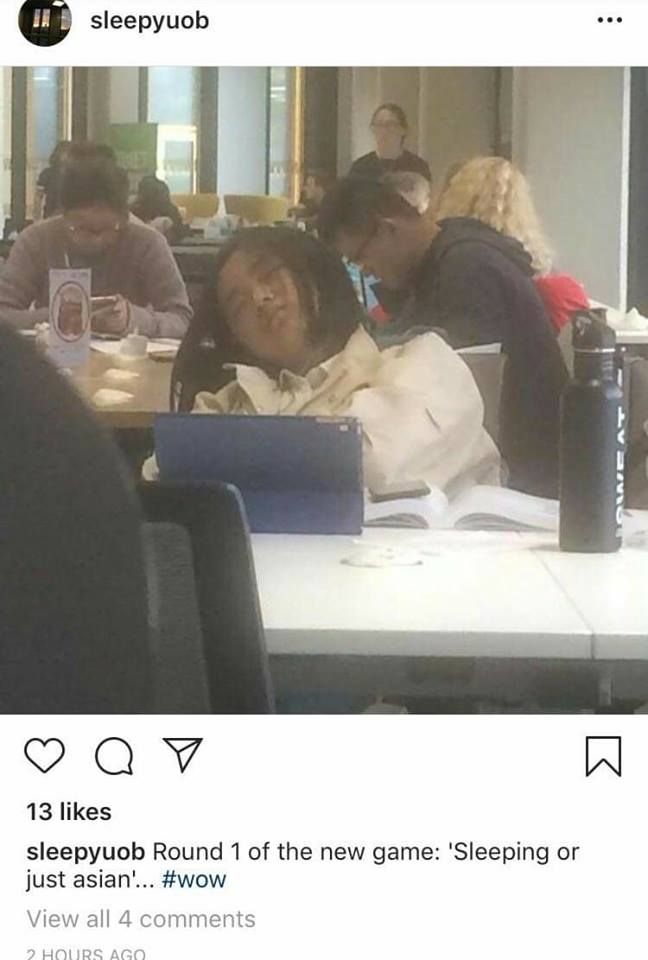 It's so easy to rely on the old excuse of "it was just a joke", or "there are bigger problems in the world" – certainly, the student who originally posted on Fab about the account has received ridicule and push back for calling 'Sleepy UoB' out. But jokes such as these are blatant microaggressions, that underline a heavier, collective, cultural prejudice, and I refuse to believe that UoB is a place for that type of mentality to thrive.

Although the account has since been deleted, this doesn't fix the issue in any capacity. Instead of being held accountable for their actions, the student behind "Sleepy UoB" has evaded any type of responsibility, and has likely learnt nothing from being called out. Instead, they're free to luxuriate in a privileged mentality that finds 'jokes' like this entertaining.

Let's be honest – they aren't sorry that they did it, they're just sorry they got caught. 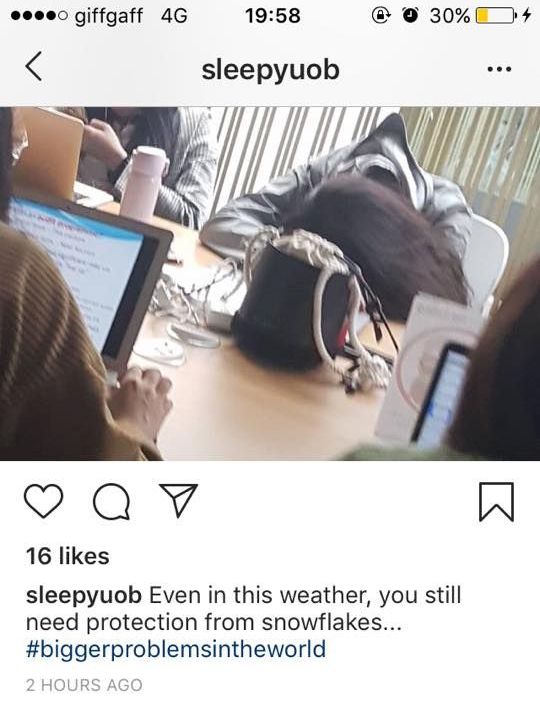 Just like transphobic jokes aren't worth your Stuesday's tickets, these kind of comments aren't worth a handful of likes and a bit of social media gratification – in short, you're not being funny, you're just being a bit of a knob.