It's dark, the music has been thumping for hours and everything is beginning to blur. Constantly slipping in and out of the present, Camilla finds herself in a canvas tipi, watching a girl perform oral on her boyfriend in front of a small crowd. The air is thick with cigarette smoke. The vibe is turned on. People are wearing pig heads next to her and not much else. It's a surreal and twisted scene, but it's what Camilla signed up for when accepting her invite to the Piers Gaveston Summer Ball a few months before.

The Piers Gaveston Summer Ball is an annual party hosted by the Piers Gaveston society at the University of Oxford. It's attended by the coolest and richest Oxford students and grads, invited by a secretly elected committee. The party location is different each year, but usually held on the grounds of a big mansion in Oxfordshire belonging to a member of the society. The location is never revealed.

Oxford's secret dining club was founded in 1977 and named after Piers Gaveston, who was the supposed favourite lover of King Edward II of England. Membership is highly exclusive and those on the committee maintain silence about the club. The committee is made up of around 12 male students, who are "actually cool, unlike the Bullingdon Club", a source told The Tab. When they're not organising the ball, the committee have private dinners in London and Oxford. Hugh Grant and Nigella Lawson attended the Piers Gaveston Summer Ball when they were at Oxford. It was where David Cameron allegedly had sex with a pig's head.

The Tab spoke to two Oxford graduates who attended the parties while studying at the university. Camilla* is 26 and went in her second year at Oxford University in 2013. Dan* is also 26 and went for all three years at his time in Oxford between 2012-2014.

Getting the invite to the ball is not easy

The guest list is decided by the Piers Gaveston committee a few months before the actual party. There is no known criteria for bagging an invite, but if you're hot, privately-educated and have an active social life, you'd most likely get an invite slid through your door. Oxford students make up the majority of those invited, but plus ones are allowed for those close to the committee. Some people who work in town, mostly the “fit baristas from the coffee shops” get an invite too.

Before receiving the physical invite, you would be invited by a Piers Gaveston member or a friend of a member. According to Dan, most people don’t know who the members are exactly. Guests first have to RSVP via text or Facebook Messenger to whoever invited them. Once confirmed they receive a physical invite weeks after.

It comes on an embossed piece of card. One year, the invitation carried a quote from a sex obsessed French aristocrat. Inside the guests were also told: "More extravagance, less clothing!" Pseudonyms of society members are also mentioned, they all have flamboyant and innuendo nicknames like Zsa Zsa Gawhore and Marilyn Monhoe inside. Camilla received hers in the pigeon hole of her college and remembers being asked to bring it to the coach for confirmation.

Nervous chatter about Piers Gav (what Oxford students call the event) grows around the university when the invites are sent out. People ask questions like “who invited you?”, “are you going?” and “have you got a ticket?” Sometimes, Camilla says, those who didn’t get invited pretend they were invited but say they just didn’t want to go. It may be the event of the year, but it’s not a free party. Tickets to the "avant-garde" event cost around £90. 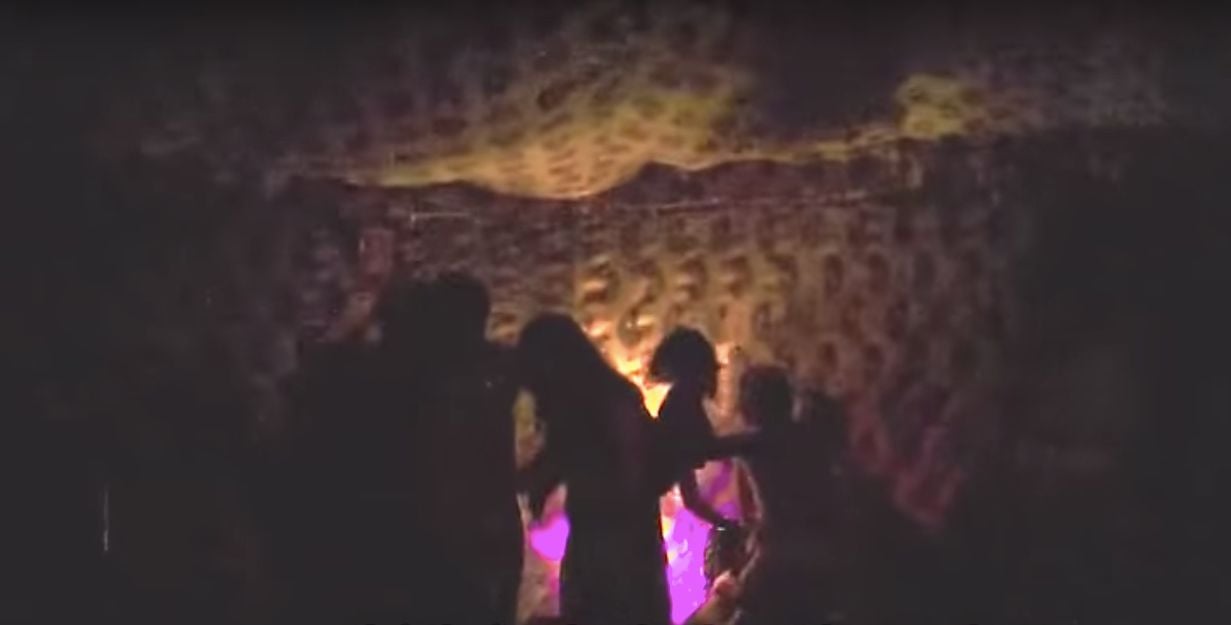 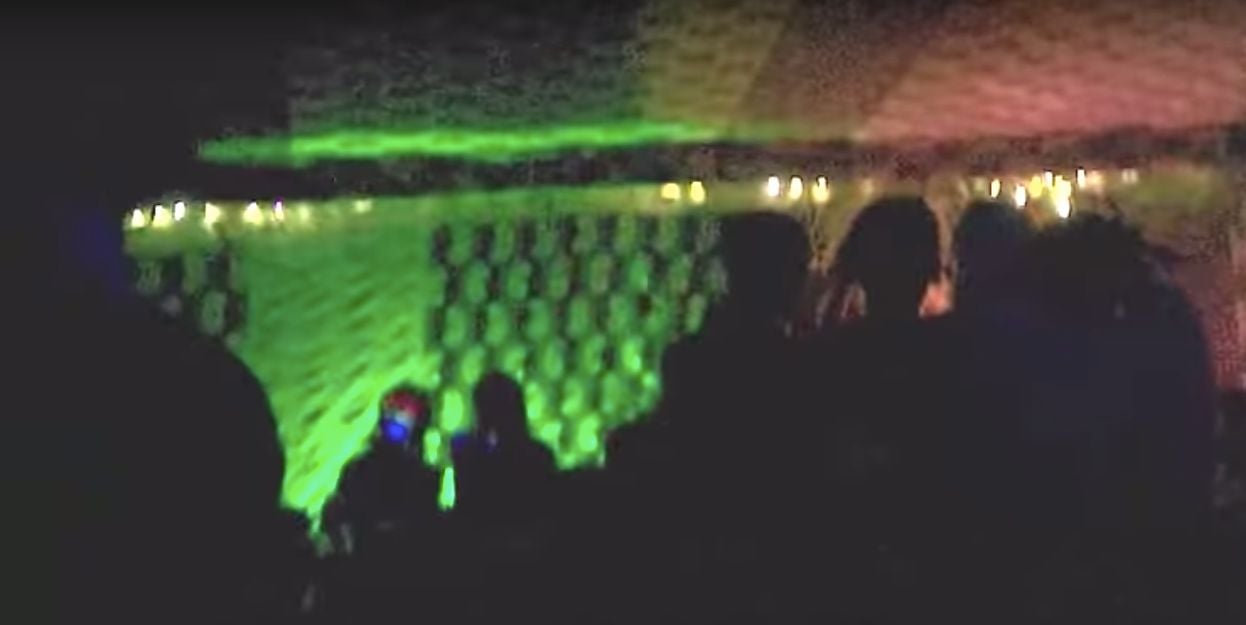 Everyone tries to out dress each other

Past party themes have included Cirque de Sade, Arabian Nights and Space Odyssey. Guests can interpret the themes in any way they wish, but most people wear provocative and revealing outfits. Piers Gav is meant to be a debauched affair, so dressing basic is frowned upon.

In the year she went, Camilla wore a sexy nightie, clip-in extensions and feathers in her hair. “But that was tame”, she says, “there was a girl who was butt naked with just brown boots on.” Or another girl wore a tutu so large, she could barely fit through the coach doors. The boys wore a lot of bondage tape on their bodies. Everyone made an effort to interpret the theme because of the general fear of "not being cool."

People start doing drugs on the coach journey there

A few months later, those invited are told to meet at a random location where a coach would pick them up at around 6pm. In 2013, it was in a pub near town, but Camilla remembers being picked up in a parking lot next to the ice rink in Oxford. Three or four coaches arrive and students queue to get in. The windows are blacked out. No one knows where they're going. Photos and videos are banned. Most people leave their personal belongings at home, so the energy on the coach is skittish. According to Camilla, people do drugs on the coach to hide their nerves. The journey takes about an hour.

Some sort their drugs before the party and start doing lines of coke on the coach there. Others wait to buy their stash from the "Treats Bar" where a designated dealer is hired to supply the guests with drugs every single year. Free alcohol is provided at the bar, but if you want to smoke, you have to bring cigarettes with you.

Guests describe the event as a sex and drugs mini-festival

In the year Camilla went, everyone was let out on a country path and had to walk up a really big hill in the middle of nowhere. Bouncers confiscated phones and cameras sneaked on the bus and bagged them up to put in the back of their own car – invitees aren’t allowed to take any photos or videos at the party. Those items are given back after the party. One person who went said it felt like being frisked by security before going into a festival.

There are three main tents on site. They're all decorated in a bohemian style with a bar inside and a DJ playing “vibey” music at all times. In the middle of the field, a bonfire burns all night. One of the tents, made of canvas material is for members only and guarded by security men recognisable from the student clubs in town. The other two larger plastic tents are filled with bean bags, draped in colourful fairy lights and filled with guests who are either dancing, chilling or smoking weed. There are smaller tents scattered around, mostly used by people who want to have sex in them. "It smells like you're in the middle of a field, a bit like at a festival. Actually it's exactly like a festival", Camilla said. 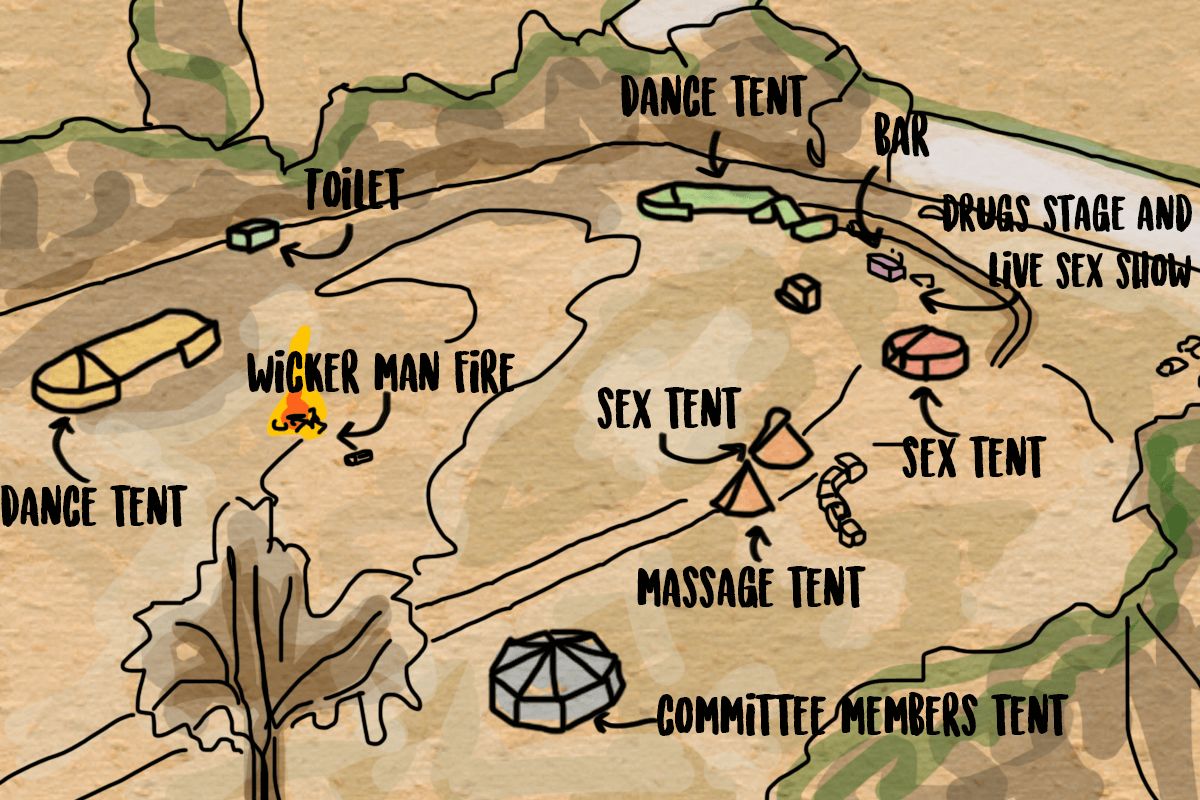 After a few hours, the drug dealer arrives, sets up a pop-up table in the middle of a field and lays out baggies on the table like he's running a make-shift sweet shop. Most people go for MD or coke. In the year Camilla went, he was charging £40 for a gram of MD and £60 for a gram of cocaine. The dealer was also selling acid and ket. One year, according to Dan, the drug dealer was late and everyone started “pranging out.” When he arrived, it was absolute carnage. He said there was “no polite British queuing but more of a scramble.”

Night falls, the temperature drops and people start having sex with each other

As the night goes on, everything gets more intense. The accumulation of empty stomachs, drugs and alcohol takes a toll on everyone. People have sex in the fields and if anyone asks you “to go for a walk”, you know what that means. In Camilla’s year, there was a couple notorious for having sex in front of everyone at parties. They had sex near the fire pit whilst a crowd of people watched.

People grope each other in tents and start “doing stuff.” A girl went down on her boyfriend in front of the whole crowd. Camilla doesn't remember properly but she seems to recall a girl inserting something inside of her in front of everyone and another drawing blood out of her leg and drinking it. The people watching were wearing pig heads and nothing else.

In the morning hours when the sun comes back up, a lull period ensues. Everyone wants to go home, they’re cold, damp and coming down from all the drugs they’ve taken. Most people have scratches all over their bodies as they stumble out of the woods. No one can leave because the coach comes at a designated time, around 4.30am when it's just starting to get light. People continue doing drugs on the coach and go to the after party in Jericho (a posh area of Oxford) organised by one of the society member. Others drop off because they want to go to bed.

“Now I look back, it was just a load the poshest kids in the country doing something that if a working class students did, the event would get shut down viciously", Dan said. "People mention it occasionally with a bit of perspective now, it’s seen as really cool but not massively lame."

Camilla agrees. “The only thing that’s fucked up about it, is the fact that it’s a really posh crew, it’s loads of rich kids doing whatever the fuck they want in a field. As far as I was aware, it was very consensual and I didn’t hear any stories of weird shit going on. You’re with your friends, it’s like going clubbing in Oxford. It’s so small, you know everyone. It’s a safe space.” She added: “I don’t even know if Piers Gav is cool anymore."