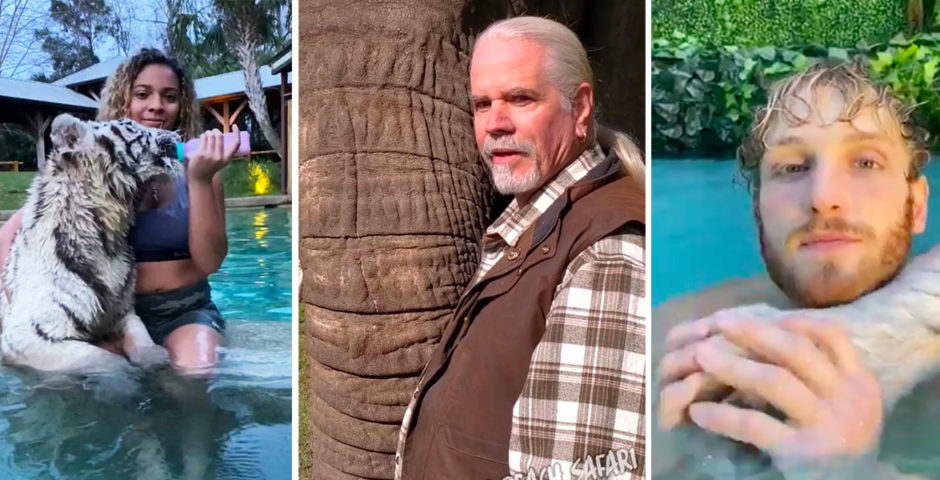 As if everything about Netflix’s series Tiger King couldn’t get any weirder, we’ve now found Doc Antle on TikTok. Not only that, but he’s also done videos with Logan Paul, and Doc’s son Kody is verified on TikTok with 11.8 million followers.

Doc Antle is best known on Tiger King for running a zoo in Myrtle Beach, South Carolina. He had a load of endangered animals which he used for petting and shows, he also had a bunch of young women parading them. Now, many years later, he’s busy on TikTok

Doc’s whole TikTok is basically what he was like on the show – him and young women playing with animals in a pool.

He’s also got a bit of a theme of chimps, fancy cars and grime music. This one is captioned “Coolest Apes in the World 🔥😎”.

His son Kody Antle is also pretty big on TikTok and hangs around with YouTuber Logan Paul. Doc uploaded a video of the two of them in a pool, cuddling a white tiger. The video is captioned, “@loganpaul with my son @kodyantle & ocean eyed Kumar, white tiger”.

Other than TikTok, Doc has been up to a fair bit since the show. In 2o19, his property was raided by the authorities – Menshealth wrote: “Antle said that authorities came to the premises because lions in his park were apparently descendants of lions from another animal park that had closed because of animal cruelty charges.” However, nothing ever came from this and no further action was taken.

He still continues an ongoing battle with PETA (People for the Ethical Treatment of Animals). He continues to fight his side, arguing: “We regret that some folks are being misled by PETA and others who don’t seem to care for accuracy, truth, and facts. But, here are the facts: Myrtle Beach Safari is neither a roadside zoo, nor any of the negative characterisations made by PETA.”