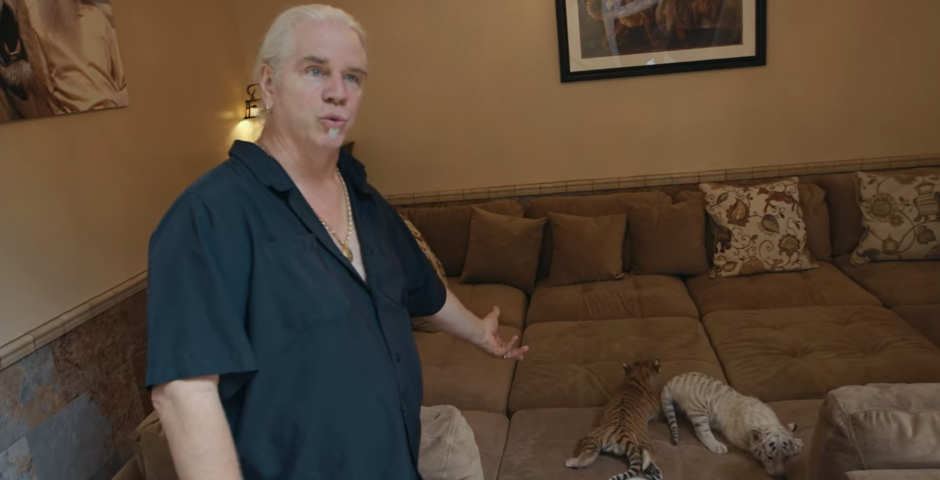 What happened to Tiger King’s Doc Antle after filming stopped?

He still has loads of wives

There’s all just something a little cultish and weird about Doc Antle isn’t there? Whether it’s the host of young women that he has work at his place or the weird interactive shows that he does with the animals on his park, something isn’t right. For fuck’s sake, the guy rides an elephant in Carolina, isn’t that enough?

But despite his obvious discrepancies, he doesn’t really have a massive part to play in the series other than to provide commentary on Joe and Carole. So, what exactly is he up to now? Does he still have multiple different wives? Why didn’t he have a larger part in the series even though he did some fucked up shit? Read on.

What’s Doc Antle been up to since?

Simply put, the fact that he inspired Joe Exotic, of all people, to build his own zoo is enough of an indicator that this guy is a bit of a nutjob too. In 2o19, his property was raided by the authorities, but he claimed this was nothing to do with anything mentioned in the Netflix series.

Menshealth wrote that “in a report from ABC 15 News, Antle said that authorities came to the premises because lions in his park were apparently descendants of lions from another animal park that had closed because of animal cruelty charges.” Doc appeared in a short YouTube video to explain what happened from his side:

While it seems somewhat unfathomable that authorities would mistakenly come to his property and accidentally find relatives of the lions in question, he apparently got let off and no further action was taken. This isn’t the first time that he has caused controversy when it comes to animal rights. PETA wrote a whole piece about his questionable animal rights record, writing “Doc Antle has a long history of violating the federal Animal Welfare Act, including by endangering the public and by failing to provide animals with needed veterinary care, sufficient cage space, and clean water.

“In addition, he uses tiger cubs and other animals for harmful hands-on encounters, photo ops, and publicity-driven videos, including one featuring a chimpanzee named Sugriva, who was separated from his mother as a baby—a common practice in the industry. And in 2014, Antle came under fire from PETA for a shameless—and dangerous—stunt in which he took two chimpanzees to a screening of Dawn of the Planet of the Apes.” Yikes.

I just had my 60th birthday. I wanted to come hang out with one of my favorite big cats, Apollo here is only five years old and already weighs over 900 pounds and stands 11.5 feet tall on his hind legs. When I asked my partner Moksha what her favorite thing she learned about ligers over the last 20 years of hanging out she said “he’s bilingual as he speaks both lion and tiger” She doesn’t look 40 does she. The world largest cat. Over 900 lbs and 11.5 ft tall.

Antle responded to the allegations, saying “As part of PETA’s ongoing campaign to provide innuendo and misinformation, they take every opportunity to distort facts and fabricate stories in order to malign organizations such as Myrtle Beach Safari.

“We regret that some folks are being misled by PETA and others who don’t seem to care for accuracy, truth, and facts. But, here are the facts: Myrtle Beach Safari is neither a roadside zoo, nor any of the negative characterizations made by PETA.”

His Instagram shows that he’s still very active with the zoo, and Womenshealth even totted up all the ways in which he makes money – just from the $500 dollar visits, they’re looking at about $1.3 million annually. Then there’s revenue from separate shows and merchandise. Doc is making bank.

What was his response to the Netflix series?

You’d think he’d be more than happy to be in the series based upon the way he addressed the camera but, like others featured in the series, he really wasn’t:

The staff at @myrtlebeachsafari and Angada the chimp (everyone was busy) We are very disappointed that our facility was mentioned in the new Netflix series. We can only assume it is because Doc Antle has been such a high profile wildlife personality for so many decades that his association would create more buzz.  It is important to understand that this series is not a documentary; it’s sensationalized entertainment with paid participants. Tiger King is the bizarre story of Joe and Carole and their feud. These characters are not representative of experts in the wildlife sector or world class facilities like ours here in Myrtle Beach. Myrtle Beach Safari has been recognized by the state of South Carolina as one of the pre-eminent wildlife facilities in the United States.  We’ve also received international accolades for the critical role we provide with our qualified, captive breeding programs and our global conservation efforts of threatened and endangered species.  Myrtle Beach Safari adheres to all USDA guidelines, and our animals are treated with the utmost care. We have never had a USDA violation and work collaboratively with various state and federal wildlife agencies to ensure our animals receive the very best life each and every day.  Over the decades we have heard every sort of fantasy scenario regarding our facility. Many of these less-than-flattering mistruths have been manufactured by those in the animal rights movement that oppose animal ambassador programs of any sort. In the end, we hope you will come visit us and judge for yourself. Every visitor to our facility quickly recognizes the magical place we have created. All cubs are cared for cradle to grave the wild accusation that we would ever euthanize a cub is manufactured sensationalism. It’s a complete fabrication that A tiger looses its value at a certain age they all have a place. It’s Also illegal, immoral,and unjust. We remain open during these challenging times with both Day and Night Safari options. Our tours are held outdoors and our 50 acre preserve provides plenty of area for social distance. Check out tour dates and options at myrtlebeachsafari.com.

“We are very disappointed that our facility was mentioned in the new Netflix series. We can only assume it is because Doc Antle has been such a high profile wildlife personality for so many decades that his association would create more buzz.

“It is important to understand that this series is not a documentary; it’s sensationalized entertainment with paid participants.” It’s hard to know what to believe at this point.

What’s the situation with all the wives?

There was many different ideas from many different people as to the exact amount of wives/partners doc has in the series, and this isn’t really made any clearer after some research.

Cosmopolitan wrote that “Barbara Fisher, who worked under Antle from 1999 to 2007, alleged that Doc liked to be his apprentices’ first sexual partners.” This was so that “they would be bonded to him in this way, where he felt like he could get them to do anything.”

Antle seems to refute these claims, telling Oxygen.com, “I am absolutely not married nor have I been since my wife died over 20 years ago now,” he said. “I’m not married and I certainly don’t have wives. I certainly am a single guy and I live in a house by myself.”