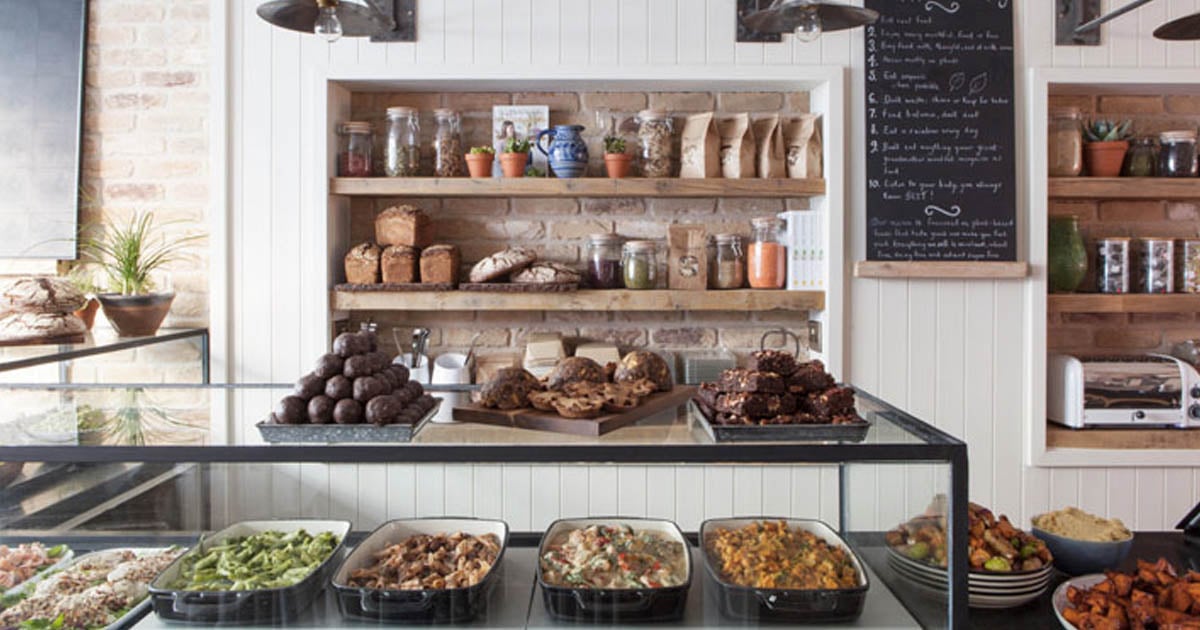 The UK vegan restaurants you have to try before you die

Who needs PETA guides when you’ve got us?

Veganism is difficult at the best of times. You spend your days desperately scanning restaurant menus for anything without cheese, arguing about protein with every carnivore in the English-speaking world or going home for Christmas dinner and being given lettuce for every course because your family think they’re hilarious.

With an estimated 1.2 million Brits now abstaining from meat, vegetarian and vegan restaurants are popping up out of nowhere. Heck, even Spoons has a vegan menu now.

With the increasing number of vegan options, we thought we’d help you out and narrow it down a bit for you. So, here’s the BBF guide of the best places to eat Vegan in the UK.

Can you really write anything about veganism without mentioning Deliciously Ella? The blogger and now best-selling cookbook author opened the Mae Deli earlier this year and it’s always packed.

The smoothies are amazing and, if you’re grabbing a salad box, you’d be a fool not to give the maple syrup sweet potatoes a go.

Not only is this place a dream for anyone with an Instagram account, their passion fruit & chia crème brûlée could probably turn Richard Dawkins into a Christian.

Anyone who hasn’t taken the plunge into fully-fledged veganism can give the cider-battered halloumi “fish” and chips a go and continue talking about how they’ll go vegan when Ben and Jerry’s makes their dairy free ice cream available in the UK. Sure you will.

From the city that brought us The Beatles, Cilla Black and Steven Gerard, they’ve now got the Egg Cafe. Don’t be put off by the name – it serves vegan Sunday roasts.

Offering a belting buffet and aesthetically-pleasing vegan cake, Sky Apple Cafe is a really great option for anyone in the North East.

If you’re not blessed enough to live anywhere near to Newcastle, however, their website provides over sixty recipes which have featured on their menus so you can give it a go at home.

Described as “the most environmentally friendly pub in Brighton”, Earth and Stars is powered by the solar panels on the roof and serves organic lager, cider, spirits and wine.

Feel guilty about drinking too much? Don’t worry about it. Technically, every round you get in is helping the environment – and if helping the earth isn’t a good enough excuse for a beer, are you even vegan?

Train delayed? No worries, Thirsty Scholar is a two minute walk away and has three variants of vegan burgers.

Almost exclusively described as “indie” on Trip Advisor, this bar has great staff, brilliant menus and £1 shots. What more could you want?

Fully dedicated to having a completely organic and vegan menu, the only thing on the menu that isn’t plant-based is the option of dairy milk in your flat white (which is obvs organic and locally sourced).

Cafe Kino isn’t just worth a mention because of their food though – the events that they hold on site are so varied that there’s an option for everyone. Whether you’re interested in life drawing or comedy shows, almond milk or semi-skimmed, Cafe Kino is a great option.

If the name “Scrumpy Willow and the Singing Kettle” doesn’t make you want to visit, then maybe the vegan cheesecake will.

A great place to go with meat-eaters, Cafe Soya’s menu is amazingly diverse. The staff are trained to know exactly what goes into their food and which dishes are safe for vegans, meaning that you will never again have to listen a waiter telling you that the egg fried noodles are 500 per cent completely OK for you to eat.

The diversity of the menu means that it’s a great place to go socially, so you can feast on veggie spring rolls while getting lectured about protein intake from your mates eating sweet and sour chicken across the table from you. Win win.

Not only is the falafel out of this world, there’s a choice of board games to keep you entertained while you wait/eat – which is probably what creates the relaxed and “bohemian” atmosphere it’s famous for.

Would highly recommend going for the tapas. Would not recommend choosing to play Monopoly – it’s not so “relaxed” when you’re ruining friendships.

A photo posted by Infinity Foods Kitchen (@infinityfoodskitchen) on Dec 10, 2015 at 3:03am PST

They have a vegan version of a Full English breakfast with the option of scrambled tofu and free Wi Fi. I don’t think anything else needs to be said.

Right in the middle of Camden, Cookies and Scream is a family run bakery specialising in Vegan cookies, doughnuts, cakes and pretty much everything else you’ve ever dreamed of.

Everything is dairy, egg, wheat, gluten and guilt-free. Also they have a pun in the name, so really what’s not to like?

In a town with 11 pasty stores, you wouldn’t think anything called “The Health Warehouse” would do all that well. However, defying all odds, the store/cafe provides really great options for anyone that’s not feeling in the mood for a steak bake.

All dishes have the option of adding vegan cheese, and the veggie burger is a definite winner.

If you’re looking to push the boat out a bit, David Bann is the place to start. If you’re in the market for a quick falafel wrap and some sweet potato fries though, go elsewhere.

This place makes the food you eat everyday look like something Gillian Mckeith used to rant about. I mean, look at it. Just look at it.

Just in case you didn’t have enough reasons to be preachy about veganism, Give Kitchen works alongside their charity “GIVE2040” to ensure that, for every meal bought, a meal will be given to a homeless person in the UK or a starving child abroad.

Definitely worth a second helping, then.

Brought to you as part of our Britain’s Best Food series – if you’d like to get involved, email [email protected]