You should be married with a kid by 30

If you’re worried about where your life is heading, Goldman Sachs – one of the biggest investment banks in the world – has all the answers. Of course it’s exactly as cynical as you’d expect from a bank. The colourful infographs, pictures of smartphones and apparently affordable homes conceal an underlying message – we’re all screwed.

They call our generation the Millennials because we’re the future. Goldman has plotted when you should get married, when you should buy a house, how much money you’ll be earning and crucially to them – how you’ll be spending your money. Obviously.

What is a millennial?

Millennials wear smart watches and Fitbits. They like waving their hands in the air and taking photos on their smartphones. If you were born in the nineties, you’re exactly the prime age to be a millennial.

Millennials don’t have much money 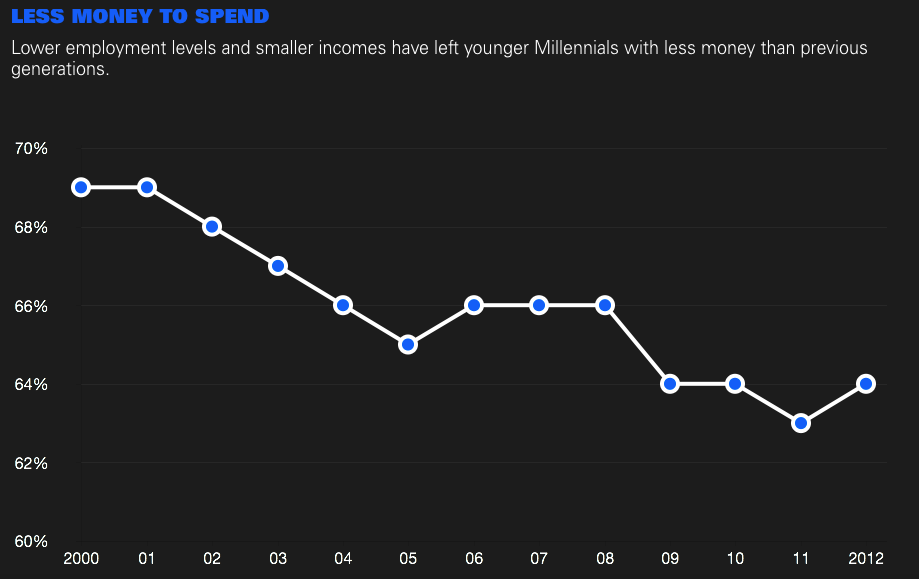 We’re poor. Poorer than our parents, but we know that already. This deceptively friendly graph shows how much money we have to spend based on our average income. This obviously nosedives after the 2008 crash, but appears to slowly be getting better. The takeaway point here is how much better things were in the early 2000s, but we were too busy skateboarding and playing Pokemon to take note. 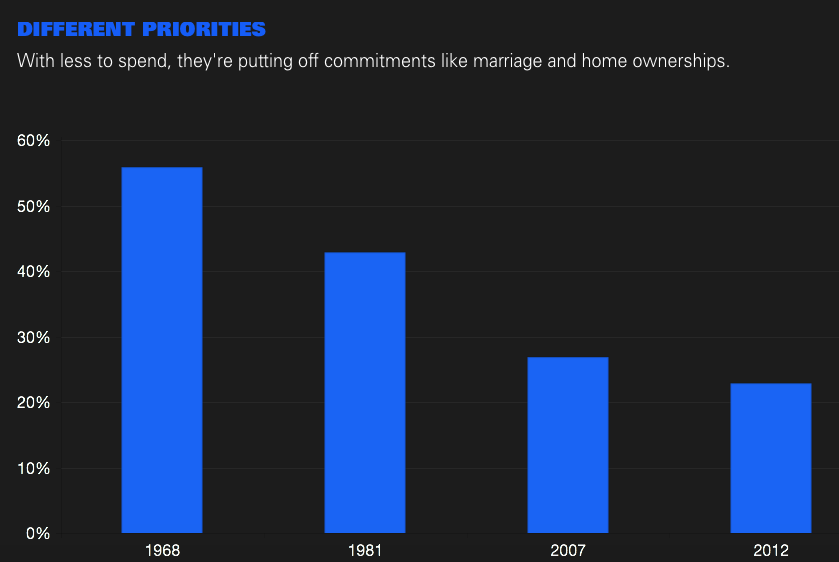 We’re full-time commitment-phobes, and that’s not going to change any time soon according to Goldman. You probably haven’t even met the person you’re going to marry yet, let alone set a date. But they have predicted the age at which you’re going to have your big day…

This makes it sound as if we’re going to get married at 30 just to avoid being single for the rest of our lives, like cashing in on a pact you made with a mate “just in case”. You scrawled it on the back of a beermat in the pub.

Our parents got married at 23, but if we were to do the same it would mean graduating from uni and settling down almost immediately. 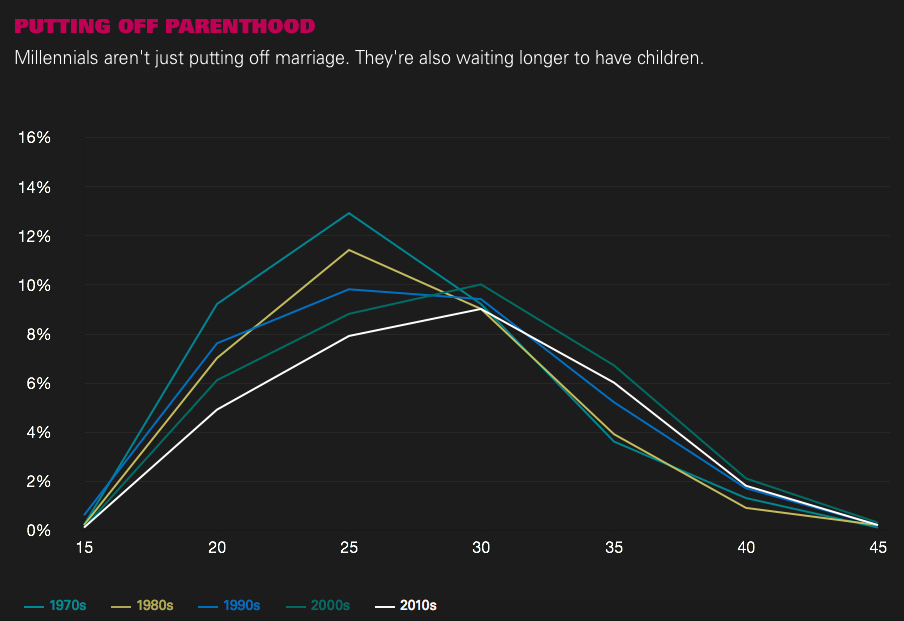 Goldman reckons 30 is also the best age to have a kid, so it looks like we’re racing towards a generation of shotgun weddings – which is traditional at least. While there’s a spike in early twenties babies, this slows down during the twenty-something wilderness years. At least without a child we’ll be able to buy a house right?

We’ll probably own a house one day, but not a car

After renting a leaky flat in Peckham for a few years, we won’t be able to take it any longer and will make a mad rush to get a mortgage – or at least that’s what Goldmans is plotting. This is, however, aimed at those who actually look likely to own property, which rules out anyone from London straight away.

Look at this. No millennials can drive. They all have green licenses. They’d rather use an app which looks suspiciously like Uber to get around. Goldman must be quaking at the idea of a communist sounding “sharing economy”, but that’s apparently where were heading. Perhaps you were part of a school run carpool: this is exactly what it’s going to be like in your adult years too.

Eating and living clean is a priority

Millennials don’t just drink wheatgrass smoothies for January, they do it for life. The verdict is that cigarettes make you look cool, probably, but smoking more than ten a day isn’t. 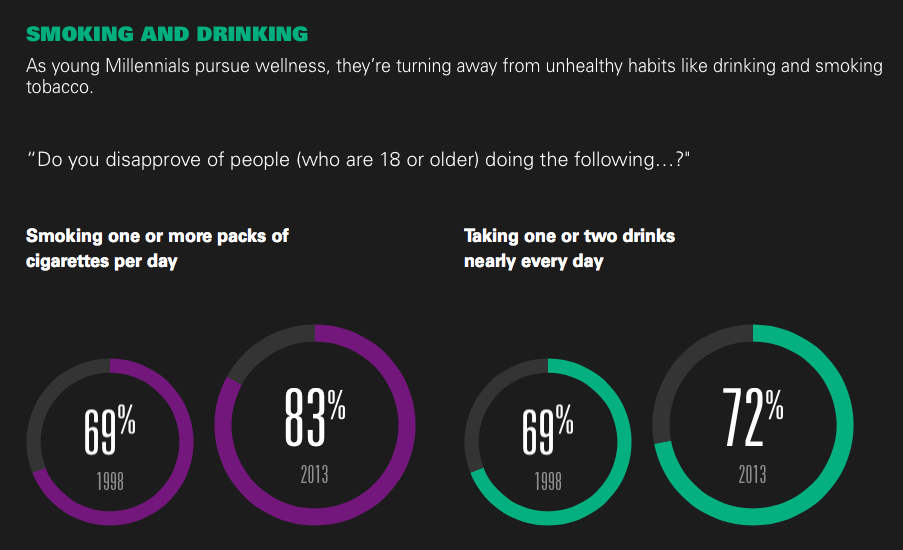 This is one for Goldman to sell to Stella and Marlborough. Drinking is out, health is in. This is the kind of logic which drives companies to start putting protein in beer. 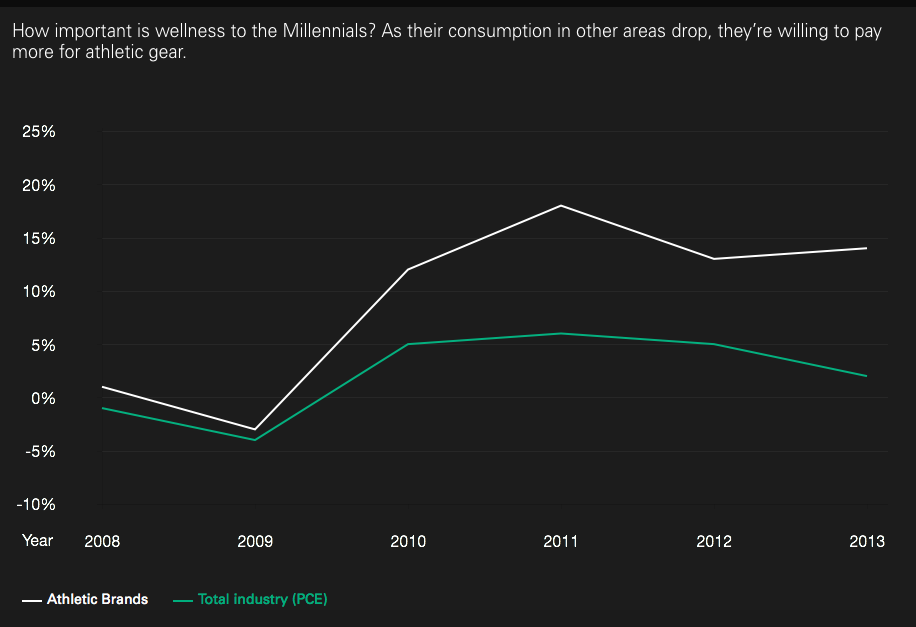 They should probably make this clearer. Are they talking about sports performance gear or just sportswear? Because apparently that’s big right now.