It already has more than 27,000 signatures

Ntokozo Qwabe, founder of Rhodes Must Fall campaign, is now facing pressure to have his Oxford scholarship taken away.

A petition to remove the post-grad’s bursary has got more than 27,000 signatures since it was launched yesterday.

Qwabe received a Rhodes scholarship to study law, but came under fire last week for making a waitress cry when he wrote “WE WILL GIVE TIP WHEN YOU RETURN THE LAND” on a bill.

The Rhodes Scholarship describes itself as “the oldest and perhaps the most prestigious international scholarship programme in the world.” It is given to 89 students every year. 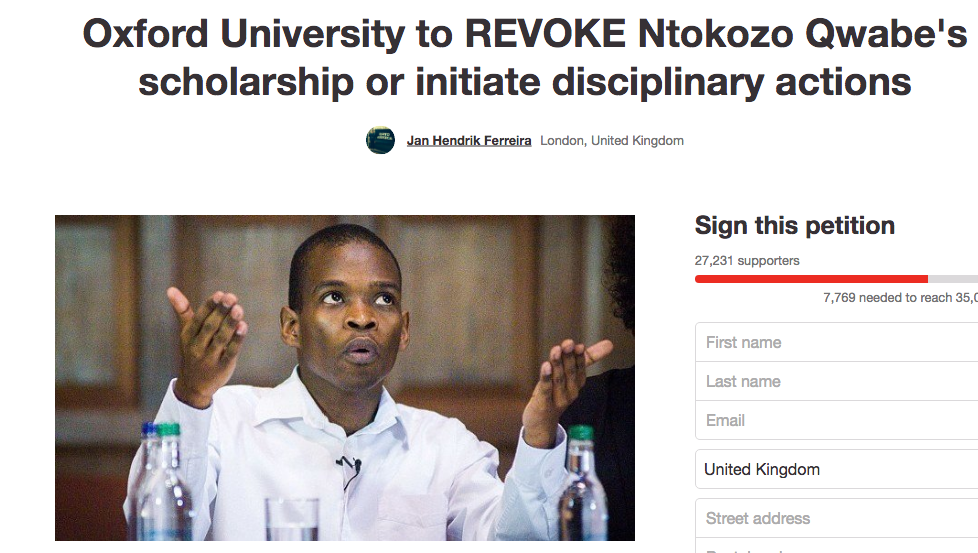 Launched by Jan Hendrik Ferreira, the petition reads: “South African Mr Qwabe is a Rhodes scholar at Oxford University, meaning he receives money from the Rhodes estate to study.

“But he is also one of the leaders of the Rhodes Must Fall movement, which wants the statue of the 19th-century imperialist removed from Oriel College.”

If it reaches the target of 35,000, campaigners say the petition will be delivered to the University of Oxford.

The law student first caused controversy when he started the “Rhodes Must Fall” movement. They unsuccessfully called for the statue of Cecil Rhodes to be removed from university. It eventually became apparent that he was receiving the Rhodes scholarship.

Last week he faced criticism after making a waitress cry what he described as “typical white tears”.

He posted online celebrating  that “something so black, wonderful & LIT just happened,” and explained that when paying for a bill with an activist friend they wrote on the bill, “WE WILL GIVE TIP WHEN YOU RETURN THE LAND.”

At the time of writing more than 27,000 people have signed the petition to have Qwabe’s scholarship revoked, while other have raised concerns about its effect on freedom of speech.