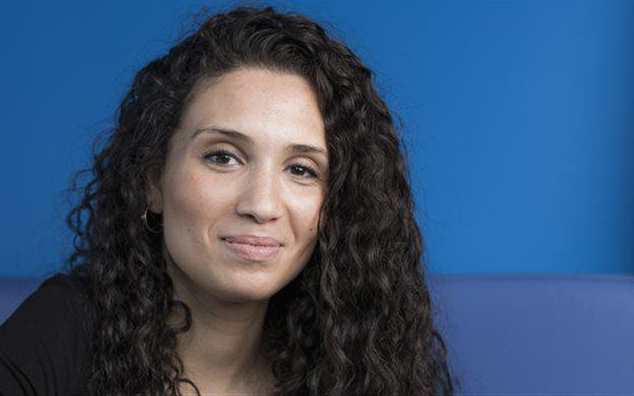 Malia Bouattia is currently the National Union of Students’ Black Student’s Officer and is campaigning to become the NUS President. She has the backing of current NUS Vice President Shelly Asquith and her campaign looks in a good position ahead of the election at the NUS Conference in Brighton later this month. 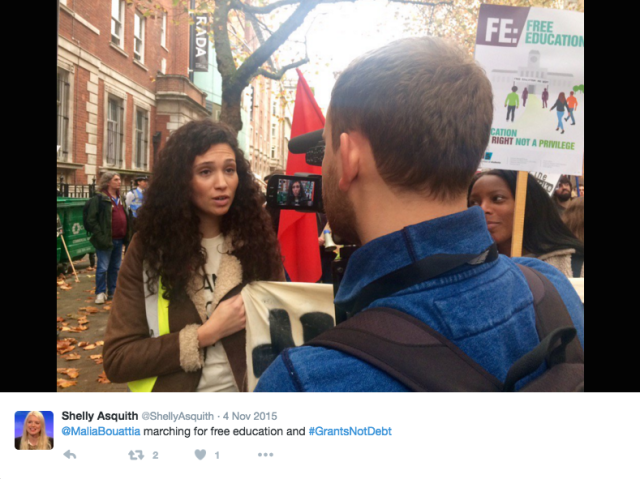 A number of students however have reservations about Malia’s putative Presidency. If elected, she would speak for over seven million students.

Malia Bouattia might be known to many as the student who refused to condemn ISIS, saying doing so would be Islamophobic. Some argued it shouldn’t be the NUS’ place to denounce an international terrorist organisation, but nonetheless a motion was put forward to the NUS National Executive Council “to condemn the IS and support the Kurdish forces fighting against it, while expressing no confidence or trust in the US military intervention.”

Malia refused to back the motion. She instead argued: “We recognise that condemnation of ISIS appears to have become a justification for war and blatant Islamophobia. This rhetoric exacerbates the issue at hand and in essence is a further attack on those we aim to defend.”

Malia and the NUS made national headlines when they refused to denounce ISIS, even though they had previously voted to oppose UKIP and boycott Israel.

Daniel Cooper, who proposed the motion, said he could not see any signs of Islamophobia. He said: “I have looked again and again at the contents of the motion, yet I cannot track any Islamophobia or racism.

“There is a stranglehold of ‘identity politics’ on the student movement.” 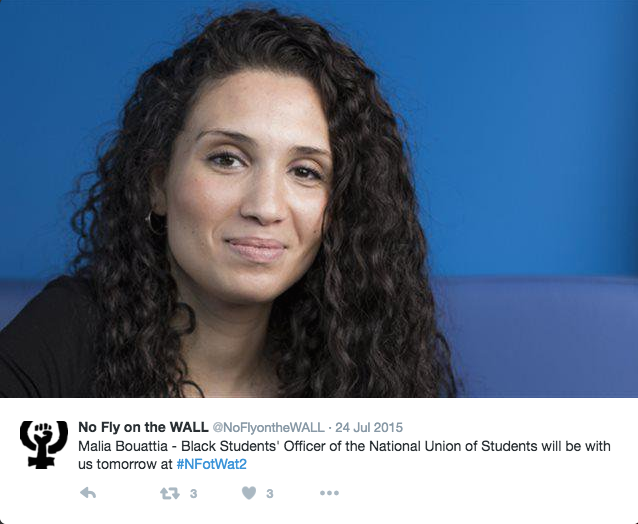 Alongside this glaring blot on her CV, a number of Jewish students are worried. One Jewish student who currently holds a full-time position on a university students’ union told The Tab that they “have very serious concerns about her being NUS President”.

“Her election would serve to worsen the already fractious relationship between the NUS and Jewish students,” they add. “And many Jewish students feel the NUS does not represent them in the slightest.

“I feel that Jewish students would continue to feel alienated by the NUS. I also feel that the allegations that the NUS is out of touch with the majority of student opinion would grow.”

Now these comments need some context.

The NUS’ no-platform policy has been misunderstood. A campaign to silence Germaine Greer was started at Cardiff University for her apparent transphobia. The NUS’ LGBT representative, Fran Cowling refused to share a stage with Peter Tatchell, a man who has campaigned for 50 years for homosexual equality, calling him “transphobic” and “racist.” But while these occurrences have taken place alongside many other similar events, the NUS have not officially no-platformed them.

Their no-platform policy is designed to ensure that no “individuals or members of organisations or groups identified by the Democratic Procedures Committee as holding racist or fascist views” may stand for election to any NUS position, or attend or speak at any NUS function or conference. Only six organisations have been officially no-platformed by the NUS:

Al-Muhajiroun is a terrorist organisation that praised the 9/11 attackers. Hizb-ut-Tahrir is a radical organisation aiming to re-establish the Islamic State. National Action is a British nationalist neo-nazi youth movement. The BNP and EDL are both far-right xenophobic organisations. And MPAC is a British Muslim lobby which has been criticised for its intense antisemitism. These organisations understandably have no place on UK campuses.

MPAC was banned from university campuses by the NUS in 2004. A 2006 report by the All-Party Parliamentary Group against Antisemitism described them in this way:

The use of ‘Zionist’ as a replacement for ‘Jewish’ is common on the MPACUK website. The CST submitted evidence that in one explicit case of this the Talmud, a Jewish religious text written many centuries ago, was described as a “Zionist holy book”. The website also posed the question: “Is this the most Powerful and Racist book in the world?!”

MPACUK has also articulated Jewish conspiracy theories through the language of Zionism describing it as an “octopus that now penetrates every western nation and pushes it to start world war three upon Muslims” and warning that “any man who knows anything of Zionists, knows that they will not stop until the Muslims ‘followed by mankind’ are dead or enslaved.”

The group has also been accused of antisemitism on Facebook for writing: “Take your holocaust, roll it nice and tight and shove it up your (be creative)!” 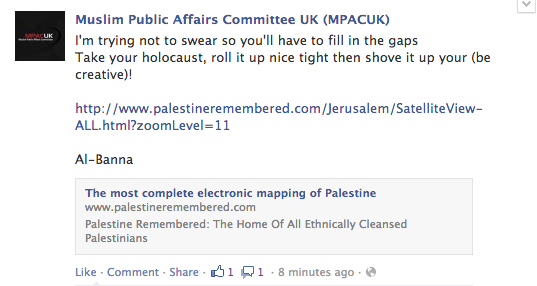 But MPAC has publicly interacted with Malia Bouattia in the past, and even endorsed her for NUS President. Raza Nadim, a spokesperson for MPAC has publicly supported Malia’s campaign. He posted a link to her ‘Malia for NUS President’ page with the comment: “If you’re part of the NUS then you’d be crazy to vote for anyone except for the great Malia Bouattia!” Malia then comments below, thanking him. 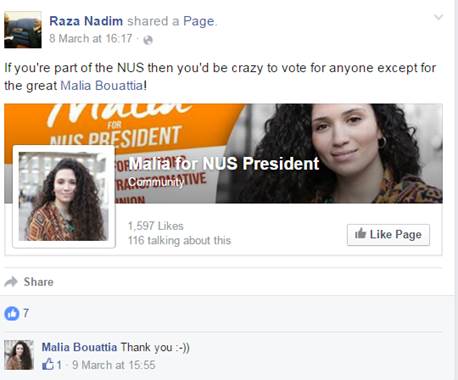 This shows a NUS Presidential hopeful happily accepting an endorsement from a group her own organisation have said should be banned from speaking to students.

When asked about it she told The Tab: “I have not been endorsed by MPAC, nor would I accept such an endorsement by that organisation. I received a post of support from Mr Nadim on my Facebook public account. I responded to the post in the same way I would to any other. I was not aware of Mr Nadim’s involvement in MPAC. I have always and will continue to uphold NUS’ no platform policy.” 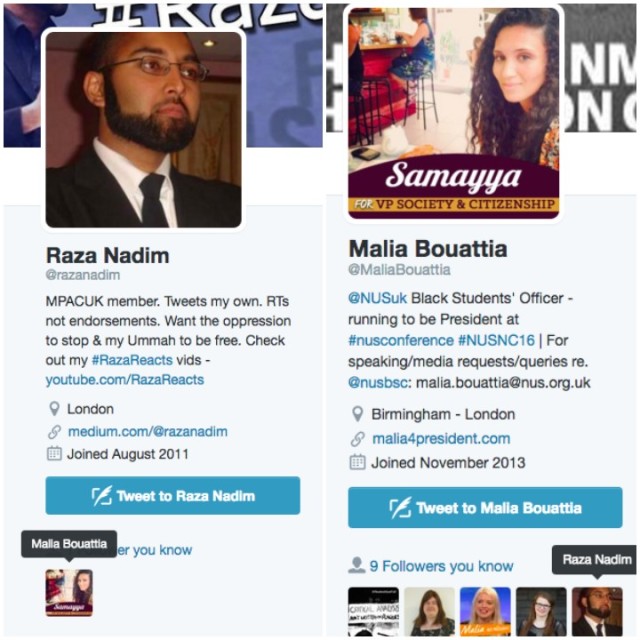 They do however follow each other on Twitter, and the first line of Mr Nadim’s bio states that he is an “MPACUK member.” It is therefore very hard to believe that Malia “was not aware of Mr Nadim’s involvement in MPAC.”

The NUS have regularly made headlines in the past year as a result of their seemingly chasmic distance from students. Many feel that if Malia were to become NUS President, the NUS will remain in the headlines for all the wrong reasons.