‘I want to make everyone happy’, says heroic shoe-shamed student

The nightmare of falling down on your graduation is on a par with starting a new school naked.

For most it remains a nightmare, but for Terri NG Winghei it became a viral reality.

The graduation fail designer spoke to The Tab from a family road-trip in rural Yorkshire.

Leaving the School of Art & Design at Nottingham Trent University was bound to be sad, and so Terri took it upon herself to bring everyone some light relief.

“I wanted to make everyone happy on graduation and so I thought taking a selfie would be really funny,” she said.

“Actually I fell over but everyone was cheering.

Wearing her sky-high wedges the graduate failed to properly plant her left foot.

In a desperate bid to reach the all-important ceremonial handshake, gravity got the better of Terri – promptly collapsing in front of hundreds of people.

But Terri insists her creations are “really wearable”.

“I’m actually quite happy with the attention – now I have almost 400 likes on that photo on Facebook!” 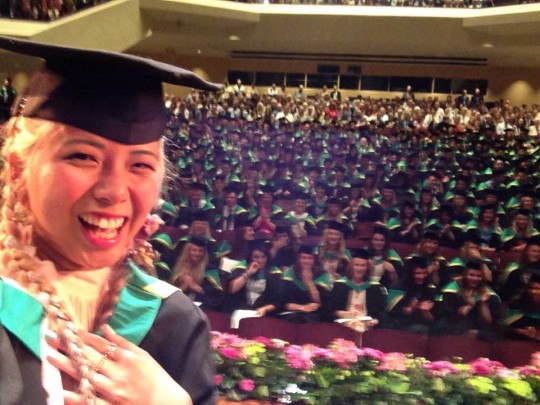 She claims the shoes were in fact very easy to walk in.

She said: “When I was at New Designers in London, I was wearing them for over three hours across the whole competition and I didn’t fall over.

“But I was just really nervous trying to take the photo – and I was really shaky.”

Yet Tab shoe-expert and fellow graduate Rachel Donald previously concluded “the only explanation for wearing shoes as horrible as those is that she’d fallen on her head that morning.”

Spending thousands of pounds to be able to design shoes is any clichéd vision of a girl’s dream but they’re based on rubbish.

“It was my final year design and the projects I had been working on were based on recycled materials,” she told us.

“When I was working in the workshop I found a lot of waste that came while making pretty stuff.

“The whole Uni made body adornments but everyone is producing waste at the same time, which I really wanted to prevent, because I feel when you’re creating something you should use most of the materials in the workshop.

“I began collecting waste from other people in the workshop and resin from the plastic and it all comes together.” 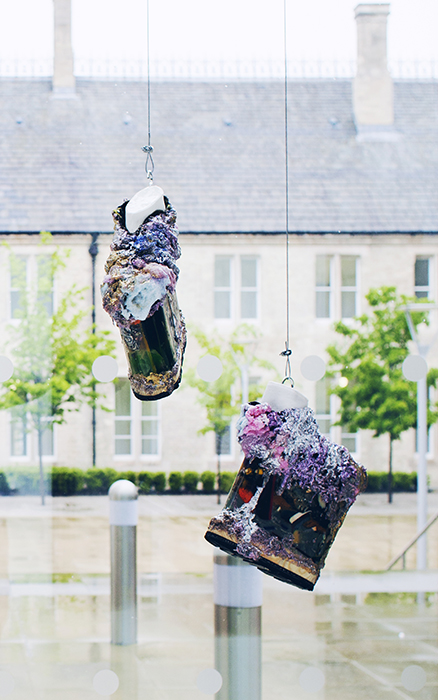 The shoes in happier times

The high (high, high) heels “are handmade from recycled scraps, the soles were car tyres but the rest of the shoes included plastic waste and off-cuts and sawdust.

“The sawdust layered the base making them really comfortable,” she said.

“My design start-up Teppuanna’s Facebook page has got more attention but because I’ve been with my parents after graduating I haven’t been able to update it with more information.”

8,500 people have viewed the video, posted on The Tab, and the designer proudly comments all of our own conclusions that it truly was, “the best fall.”