Student with over 50 convictions graduates with a first… in Criminology

A student with 50 criminal convictions who turned her life around has graduated with a first.

Natalie Atkinson, from Lancaster, was awarded a first class degree in criminology from the University of Cumbria despite totting up over 100 criminal offences from the age of just 12.

To add to her successes, Natalie has won the NUS Endsleigh student of the year award and has been accepted by London School of Economics for a MSc in Criminal Justice Policy.

The graduate spoke about the challenges of going from prison to University.

She said: “My biggest fear was that I would not fit in to the university but my concerns were soon put behind me. From day one I have felt supported and empowered to achieve my potential.”

The former offender gained 95% in her dissertation. She had racked up more than one hundred criminal offences in over fifty crimes before turning her life around before uni. Natalie went off the rails at 12, getting hooked on a heroin substitute, attacking police and dropping out of school at 14. 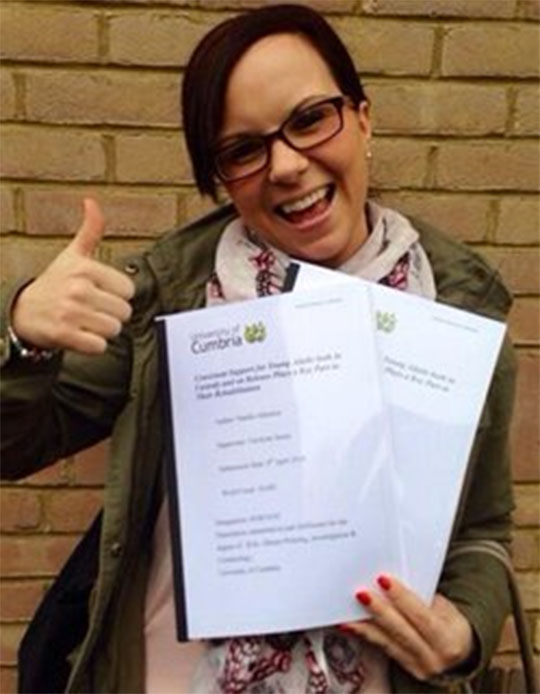 Photo courtesy of Natalie and the University of Cumbria

Within only a few years Natalie amassed more than 100 convictions mainly for theft, assaults, damage and battery offences. During her four years in prison, Natalie was put in a segregated wing for the most serious offenders whilst she managed to complete her GCSEs in Maths and English.

95% on my dissertation & graduating with a first class honours degree!! Just shows you should never give up on people 🙂 #OverTheMoon — Natalie Atkinson (@Nat89atk) May 21, 2014

The chaotic student was approached by the BBC to present a documentary, Banged Up and Left to Fail?.

Using her own personal experiences to highlight the struggle that young offenders face in the criminal justice system, Natalie spoke to young offenders who were struggling with life after prison.

At the age of 18, Natalie was freed from prison in 2011 with only the clothes on her back and £46.50, the average prison discharge grant and was left to fend for herself.

The inspirational student hopes to use her degree to help others in her position. “Hopefully one day I’ll be in a position to challenge and influence the policies and practices that exist relating to young people within the youth and criminal justice systems.”

Natalie aims to use her studies in criminology to help change the restorative justice system to rehabilitate young prisoners into society after she completes her MSc.