Uni friends catch a fish worth £1million on their holidays, but aren’t allowed to keep it

Five university friends on a kayaking trip found this massive rare fish worth around ONE MILLION POUNDS – but they won’t see a penny. 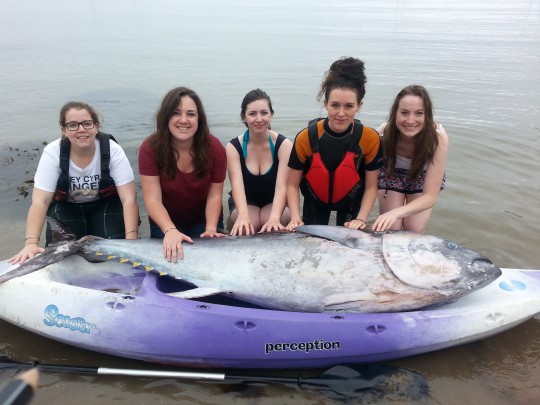 It measured 2.17m – 7ft 1 ins – and was found floating in waist-deep water by the beach as the friends enjoyed a holiday in Kingsand, Cornwall.

The fish are very rare in British waters where it is illegal to catch them but experts say the fish is worth at least £1,000,000.

Last year a 4ft 6in long barrel-shaped fish was found floundering off Torquay – around half the size – and was valued at £500,000.

But sadly for the girls the 300lb fish was taken by officials from Marine Management Organisation, part of Defra, the Department for Environment, Food and Rural Affairs. 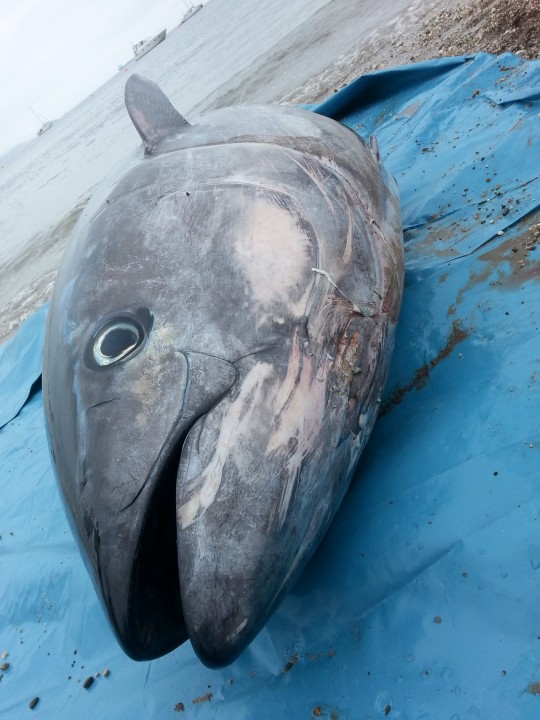 The species is critically endangered and it is illegal to catch or sell them in British waters – so they girls won’t see any money for their epic find.

Sarah said: ”At first we thought it was a shark. It was so heavy it took four of us to drag it onto the kayak.” 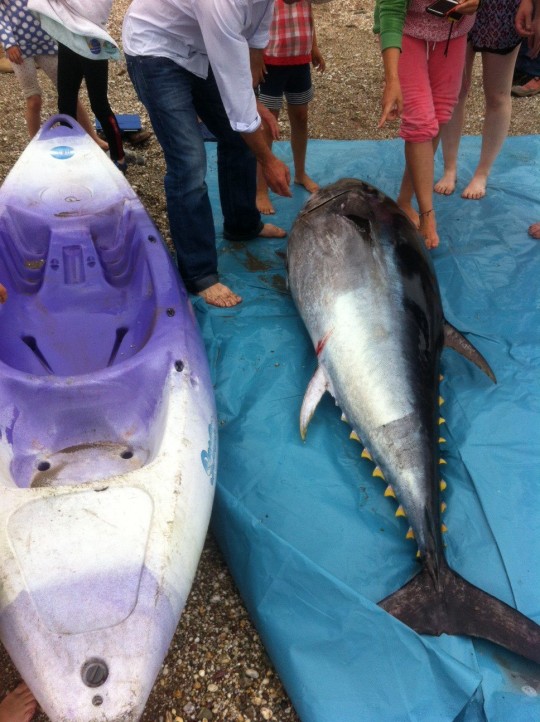 “Like a shark”: the girls struggled to lift the fish into their kayak

Somebody in the neighbouring village of Cawsand had reported seeing what they thought was a dolphin trying to beach itself the night before, which now seems possibly to have been the fish.

The find has been reported to the authorities and the fish was transported to the University of Exeter today to be studied by scientists there.

The girls responsible for the catch all met at Oxford Brookes University and are still friends and started a weekend break in Kingsand at Hannah’s parent’s holiday home on Saturday. 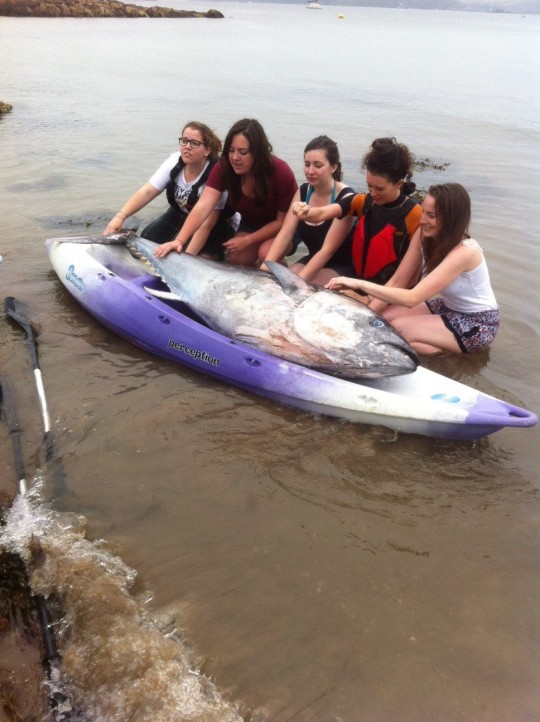 The Brookes girls pose with their catch of the day

They took out two kayaks on the same day – and found the massive fish just moments after getting into the sea.

Sarah Little, of Tunbridge Wells, who works in PR, said: ”We took the kayaks out at 12pm and we’d only just got in the water and were messing around being silly when we saw this massive thing floating on the sea bed.

”I shouted ‘shark’ but then we saw whatever it was was dead and we had a closer look and hauled it up across the kayaks. It was massive.

“We dragged it to shore and by this time a large crowd had gathered on the beach and saw what we had.

“We tried to flip it over but it was too heavy so four men had a go – and they couldn’t lift it either. There was lots of faffing about. 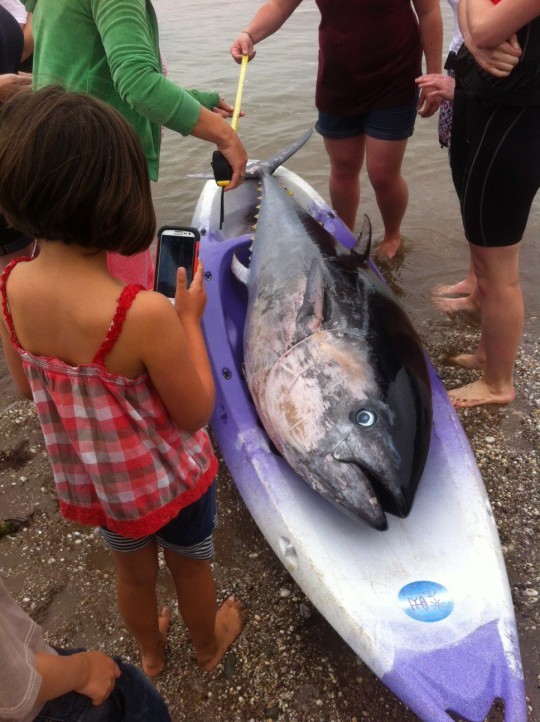 “Claire Wallerstein, from the local strandings group, was on the beach, and she contacted officials, but in the meantime a local fisherman came up and said it would be ideal for bait for him.

”We had no idea it was that rare so we were happy to give it to him and he used a kayak to take it out to his boat and sailed off.

”But then someone official called Claire and said they’d looked at pictures she’d sent them and said ‘don’t let it get cut up it’s a bluefin tuna’.

“So the officials then went off and found the fisherman and got it back and are taking to a university. 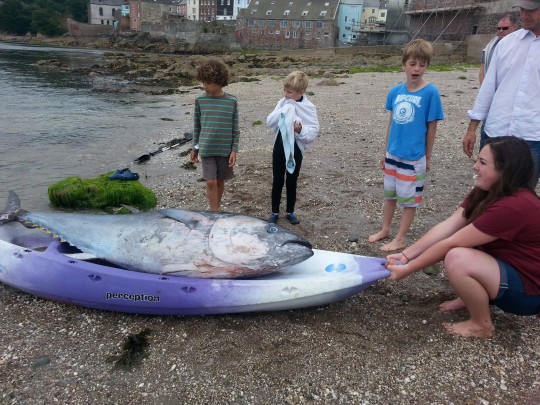 Next stop Exeter: the fish is being examined by experts at the university

”By then it was 3pm and we went for a kayak and when we got back we heard it was worth hundreds of thousands of pounds.

“We’re not worried that we won’t see the money, you can’t mourn what you never had. It’s certainly made the holiday.”Laura, from Preston, is an architect. Hannah, from Oxford, still works at the uni. Shauna, from Ashford in Kent, is still studying law there and Charlotte, from London, is an architect.

The girls are all single and their holiday finished yesterday.

In parts of the world where it is legal to catch them bluefin tuna can fetch vast amounts of money. In January a 489lb specimen sold at a Tokyo fish market for £1.09 million.

Bluefin tuna are particularly prized in Japan for sushi and sashimi. 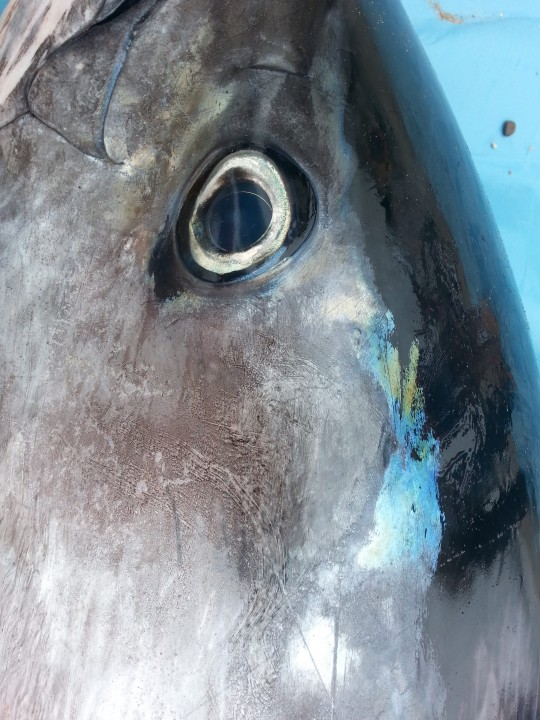 Can’t take my eye off of you… 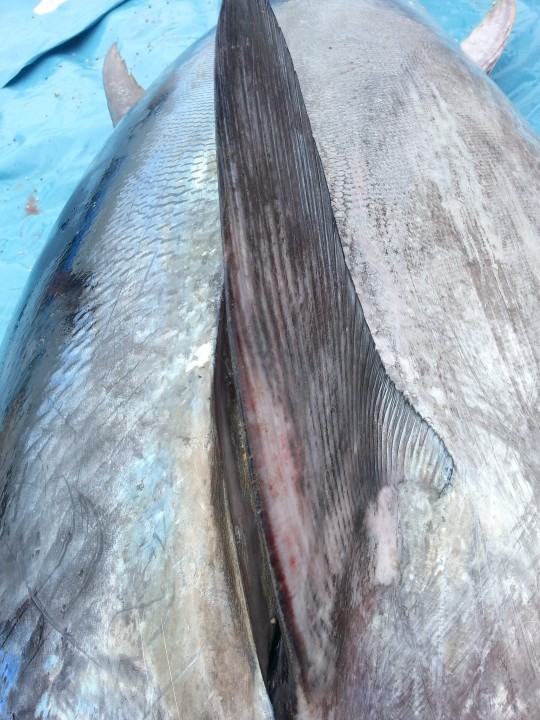 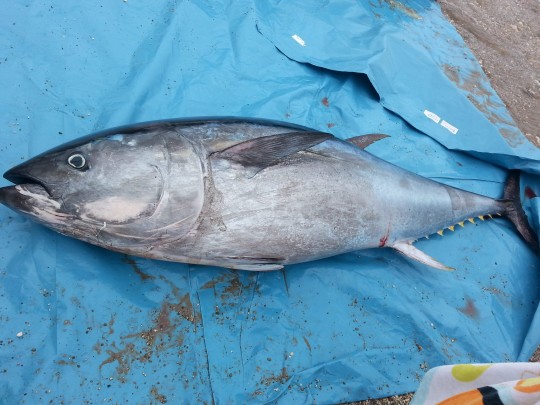 This would make for one hell of a fish supper

Bluefin tuna are rarely seen in the English Channel although they were once common in the Mediterranean and Atlantic.

Over the past few decades numbers have declined by up to 82 per cent largely due to over fishing.

The specimen is still a tiddler compared to some bluefin tuna which have been known to grow over eight feet long and weigh more than 950lb.

A spokesman for the Marina Management Organisation have identified it as a bluefin and there is an EU ban on the sale of them. 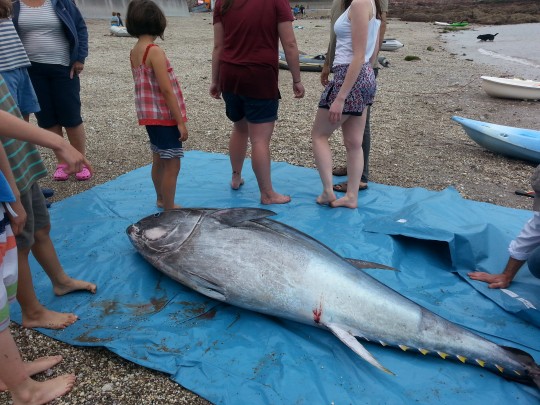 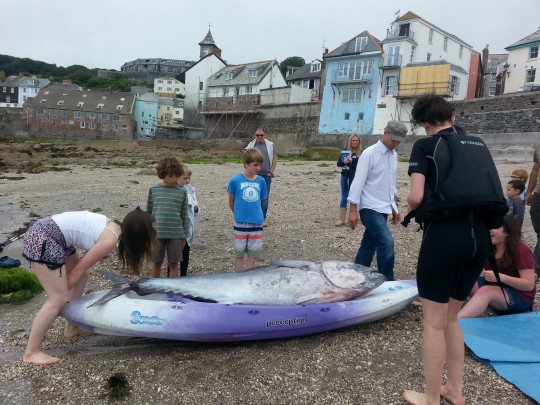 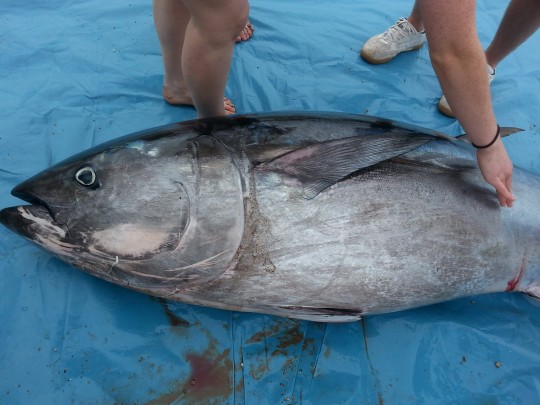 A spokesman for the Marine Conservation Society, confirmed that bluefin tuna are rare visitors this far north.

He said: “This is a rare event, as Atlantic bluefin are only sporadically seen and reported in the English Channel.

“They are rare because they have been fished heavily in recent decades, and the species is close to extinction.” 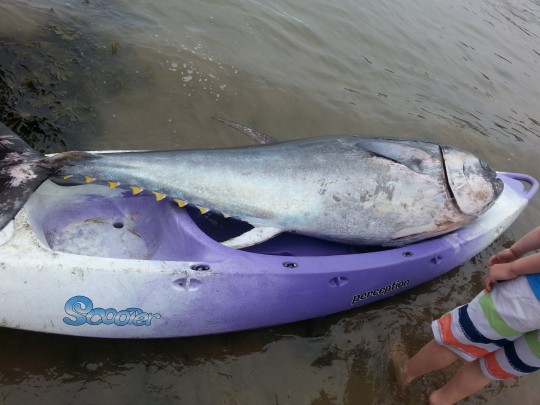 We need a bigger boat! 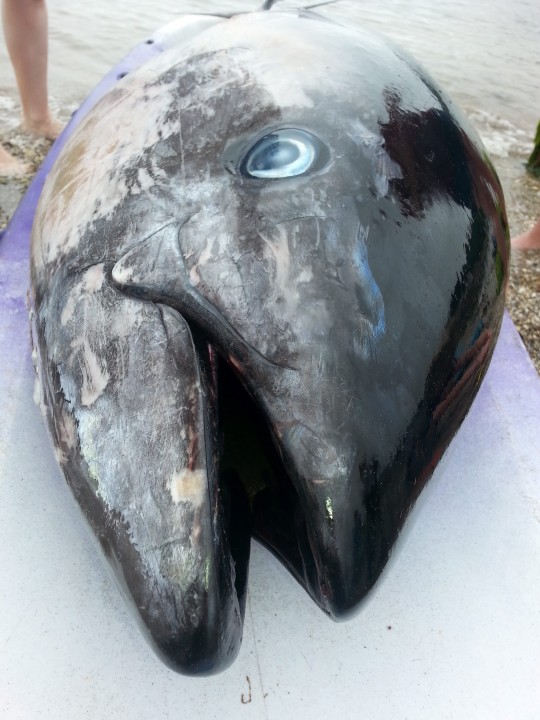 The girl’s catch weighed in at 300lbs, about the same as the average NFL lineman 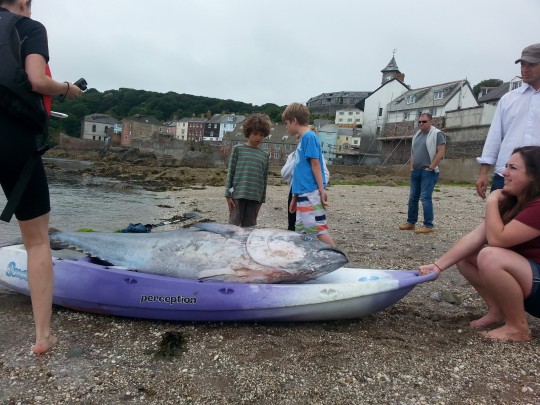 A spokesman for the SeaLife Centre network of attractions, said: “Bluefin tuna are a common sight in the Mediterranean, where they are fished mainly for the Japanese market, but they’re a rare sight off the UK coast.

“It’s the right time of year for unusual vagrants from warmer waters to turn up around our own shores, following the northerly migrations of smaller prey species, but I don’t recall any previous records of bluefin tuna.”