An exclusive Tab poll has shown that “banter” is the most hated slang.

16% of the students who responded want to see the back of “banter”, narrowly beating prinking and amazeballs into second and third respectively.

True to our promise, this means that the word “banter” will be banished from the Tab.

If you’re in the 84% of students who love the banter, then savour this article – it’s the last time you’ll be seeing it on the Tab. 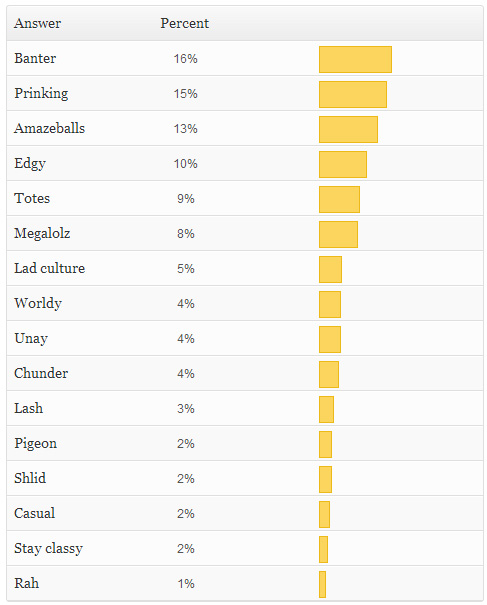 B***** owed much of its popularity to cult figures such as the Gap Yah Guy and to TV shows including Top Gear and The Inbetweeners that glamourised the trading of humorous insults amongst friends.

RT if your liver hates you.

Now, it’s officially confirmed that banter has gone too far.

For too long it has been the preserve of boorish rugby louts regaling their mates with tales of “smashing birds” and “necking pints”.

For too long it has been beloved of stay-at-home chronic masturbators who call each other “n00bs” whilst playing World of Warcraft.

For too long it’s been a source of self-identity for repeat-peddling digital TV channel Dave which has declared itself “The home of witty B*****”.

Pics: Steven Gerrard had a bit of banter with the Hull fans today http://t.co/AZoA7PvTRh

No longer. It’s cringe, it’s embarrassing, Alan Partridge has said it and it’s had its day.

Despite what seems to be a love-hate relationship with “Rahs”, Tab readers decided that the Jack Wills fanbase gets to keep its label with only 1% wanting to erase the term.

Students are also keen to keep “stay classy”, “casual”, “shlid” and “pigeon” as part of the unay canon.

The poll also reveals that students are fond of a fun time with “lash”, “chunder” and “unay” all picking up 4% or lower ensuring that even if the word b***** goes, campus b****** will live on.

Worryingly “Megalolz”, favourite of evil Lostprophets singer Ian Watkins, only picked up 8% of the votes.