‘White people are systematically vilified’: We spoke to the head of ‘NYU White Student Union’

It’s existed for less than 48 hours but the so-called NYU White Student Union has already attracted a lot of attention.

The Union claims to “unapologetically provide a safe space for white students to air their feelings” and they “condemn the cowardly campaigns of moral subjugation and propaganda that seek to instill self-hatred and surrender within European-American youth.”

The group does not seem to be affiliated with the university and its links to NYU have not been verified.

There was an instant reaction from the NYU community: the Facebook page has been littered with comments ranging from “I’m biracial and you guys are cool” to “Here is my European voice being heard: Fuck off and fuck you.”

Following such a mixed and uncensored reception, we interviewed the person claiming to be the society’s founder.

Fearing for their safety, they would not meet us in person or talk on the phone but only speak to us online. 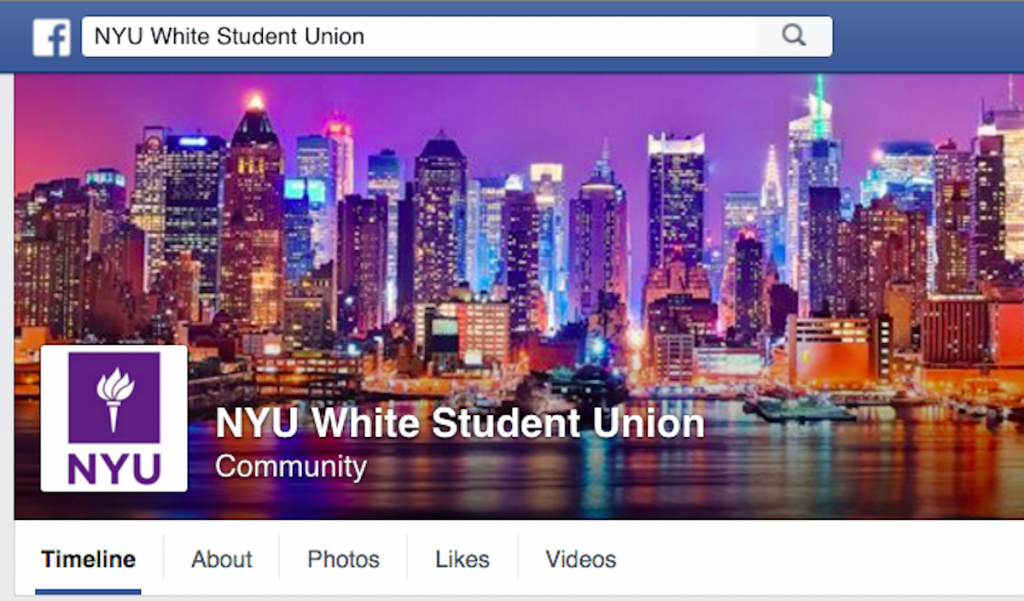 Could you tell us a little about yourself?

I am a liberal arts undergrad student at the College of Arts and Science. I am from the suburban New Jersey area, Montclair specifically. I can’t get more specific than that.

How has the reaction been at NYU to the page since you launched?

The group right now is a very small informal group of students at NYU. We are frankly afraid to come out publicly on campus due to threats of violence against our persons and family since we put up the Facebook page. This is a very delicate issue. People are actively trying to silence us and destroy our potential employment opportunities. 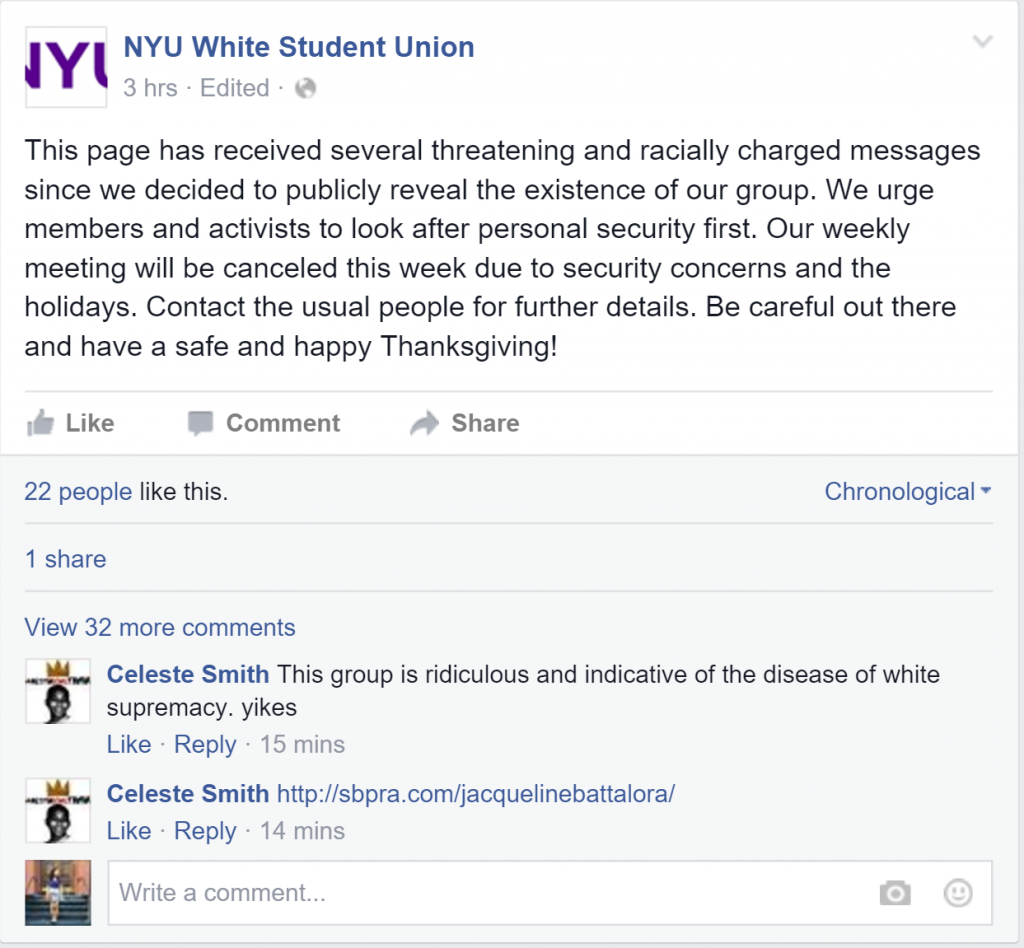 Have you had a positive uptake?

Well I am getting lots of positive messages mixed in with the trolls and haters and those threatening to kill my family. So yeah. We are careful about meeting new people in person though and new members have to be carefully vetted since we are receiving death threats and campus social justice activists are not shy about wanting to destroy anyone that disagrees with them.

Some people on your group have left some pretty negative comments – you mentioned security concerns, in what form have they come?

Yes. We advocate for free speech for all people of course, so I have not censored any comments on the page, so negative comments have stayed up. The security threats are twofold. One is the sheer number of death threats that trolls send regularly. That is not surprising. More serious are threats of harassment of individuals and their families and threats of destroying careers and future employment opportunities. For college students with debt, this is a very serious possibility.

Are you hoping to hold events at NYU?

I doubt that the administration would allow us events on campus as of yet. For now we are content to gather at private locations. There is a well-known coffee shop where we tend to have our gatherings. It is small now, but maybe if we get momentum and the threats stop, this will change. 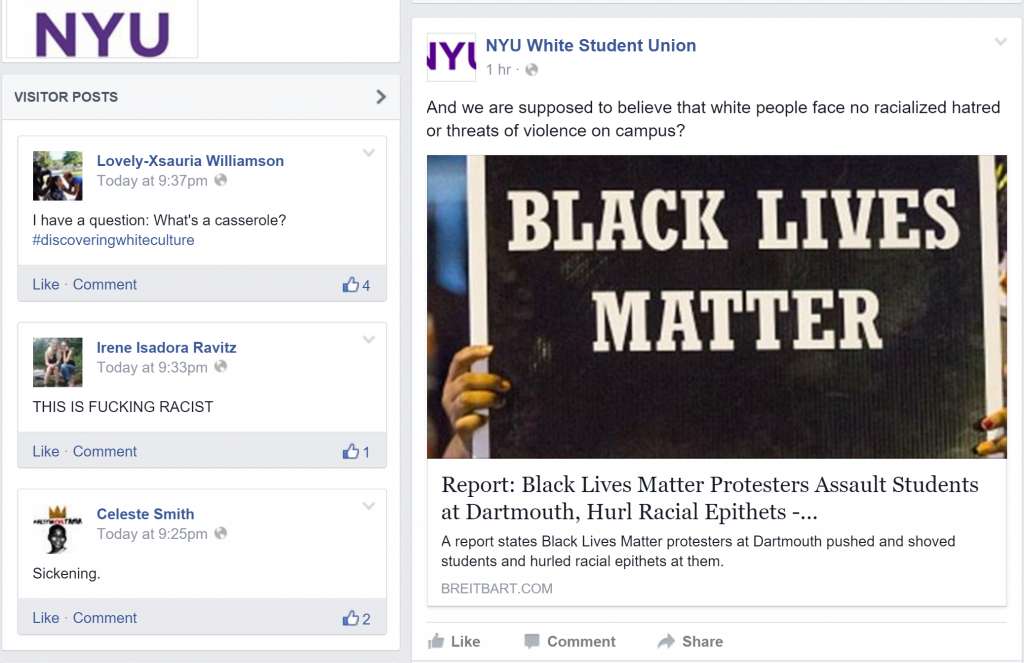 Of course. We want allies of all races if they are willing to use their time with us advocating for our issues. We have had many Students of Color reaching out with sympathetic messages, particularly those of East Asian descent.

Is this part of a national movement of white student unions and how is that progressing?

Yes it is. We are small, but there are activists at colleges around the country currently and we are in touch informally with each other and support each other. There is no centralized organization though, it is mostly on a volunteer basis at this point. We urge any concerned students that agree with us to start their own White Student Unions on their campus. 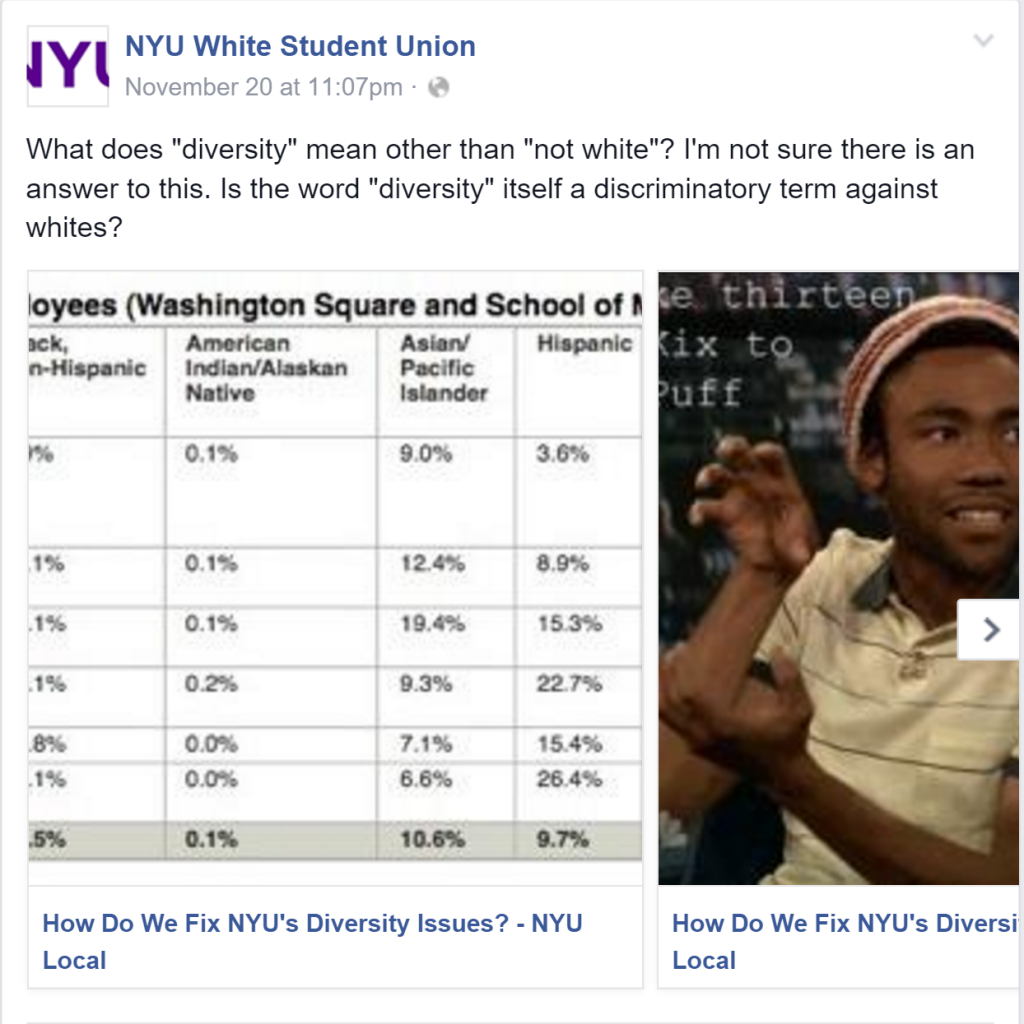 What do you think about the events at the University of Missouri, Yale and Princeton? Can you put these into context on a national level?

Well, they are shameful frankly. This is political correctness gone mad and the systematic vilification of white people. Do you know anyone that could tell you what the School Chancellor at Missouri even did? It’s not even clear that he did anything.

Frankly, this seems to me to be a power play by the Black Lives Matter people that know they can push issues now that they have national attention and the support of the media, intellectual and political class. They can push for more power and concessions and they have to get them because to deny them means racism.

It is a very insidious way to seize institutions and turn them away from their purpose of education towards a purpose of political indoctrination.

What harassment or racism do white students face on campus?

Well, for now they are simply online harassment. Though the Black Lives Matter crowd has recently upped their activity and rhetoric on campus to the point of screaming at white students who do not join their protests that they are racist crackers and such. Perhaps you have seen the videos on the recent Dartmouth protest? Truly shameful.

The atmosphere on campus now is very racially charged. Race is all that is being talked about. But white people effectively have no voice here because our voice is systematically excluded from discussion, often this is even sanctioned by the administration who condones meetings where it is openly said that white people cannot speak or it would be preferable for them not to attend.

Want to respond? Email [email protected] and pitch your idea.

Since we published this story, similar White Student Union pages have appeared at colleges across the country. As our team at Princeton have reported this morning, they are likely to be hoaxes organized by online trolls.

The Tab reached out to the anonymous account behind the NYU page today, which continues to claim that the “society” is student-run.