Hundreds of Dartmouth students and community members participated in the blackout protest last night. I was proud to be one of them

Hundreds of Dartmouth students and community members participated in the blackout protest last night. I was proud to be one of them.

It was inspiring to walk through campus all in black, and to see so many other students doing the same.

But I didn’t make it to the end of the protest, by which time a small group of participants had descended to aggressive verbal harassment of their fellow students.

But let’s start at the beginning.

Structural racism is a reality in the United States, and students all around are beginning to take note.

We have all read about tensions at the University of Missouri. Racism at Dartmouth takes on a more subtle form, but it is alive and well. 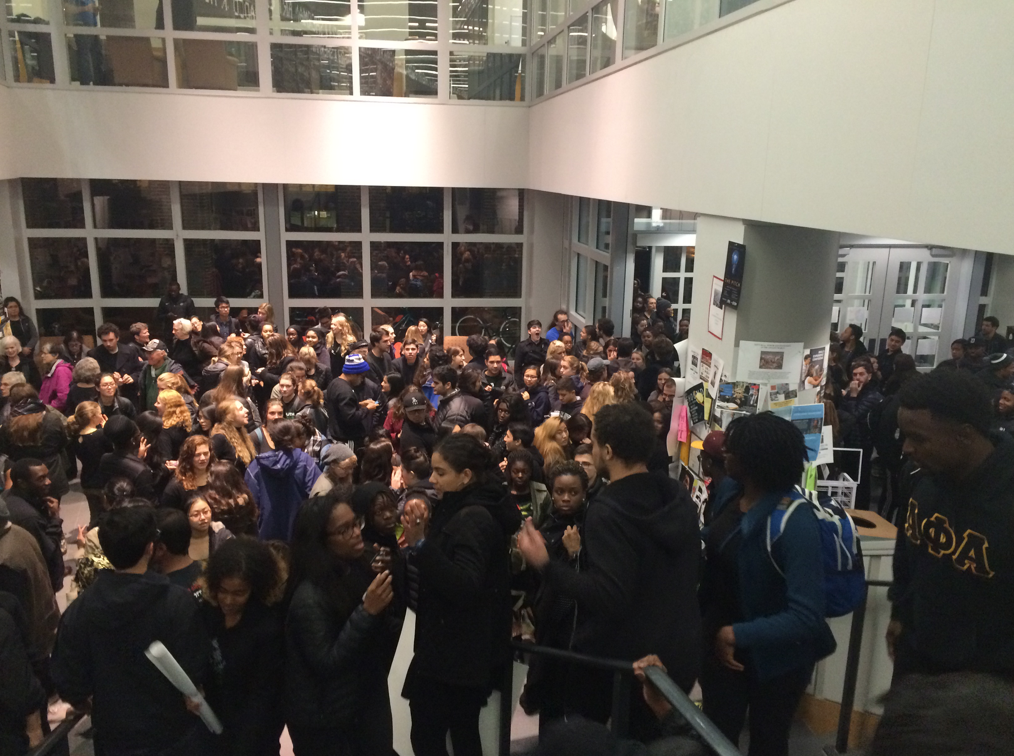 Students around the country have organized “blackouts” in response to racist incidents and in solidarity with students who do not feel safe on their college campuses.

At our blackout, protestors began to gather in Novack at around 7:40pm. By eight there was a large crowd in the cafe.

There was limited presence from SNS, but a presence nonetheless.

Following a short speech, the crowd walked to Dartmouth Hall, shouting in protest and singing “We shall overcome.”

Crowds gathered underneath Dartmouth Hall, shouting for justice. After several minutes the crowd gathered into a circle, where a passionate speech was given.

Several minutes of silence followed the speech, honoring the people who had lost their lives to police violence. 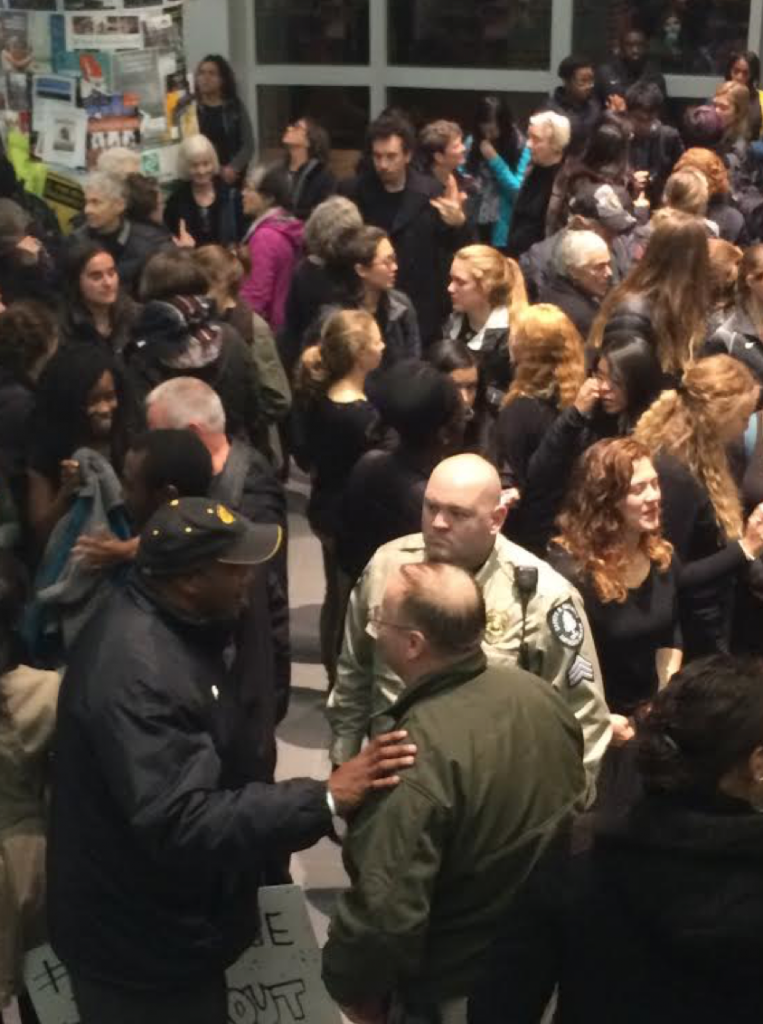 Following the moment of silence, the protestors went back to Novack. An anonymous 19 student who was studying in Novack describes the incident that followed:

“I was sitting in Novack studying when a large group of protestors came in chanting ‘black lives matter.’ They gathered in the center of Novack amongst the tables where there were a number of people working peacefully.

They kept shouting and started banging on tables. They demanded that people stand up to show their solidarity. Those who did not stand were targeted and questioned.

At one point the protestors crowded around a guy sitting on his laptop and stared at him screaming at him ‘If we cant study, you can’t study.'”

The student who was being yelled at questioned the protestors aggression, and went on to identify himself as a being a part of the Latino community. He was subsequently attacked by one of the protestors who shouted “I’ve never seen you at the LALACS house,” followed by a thunderous applause. 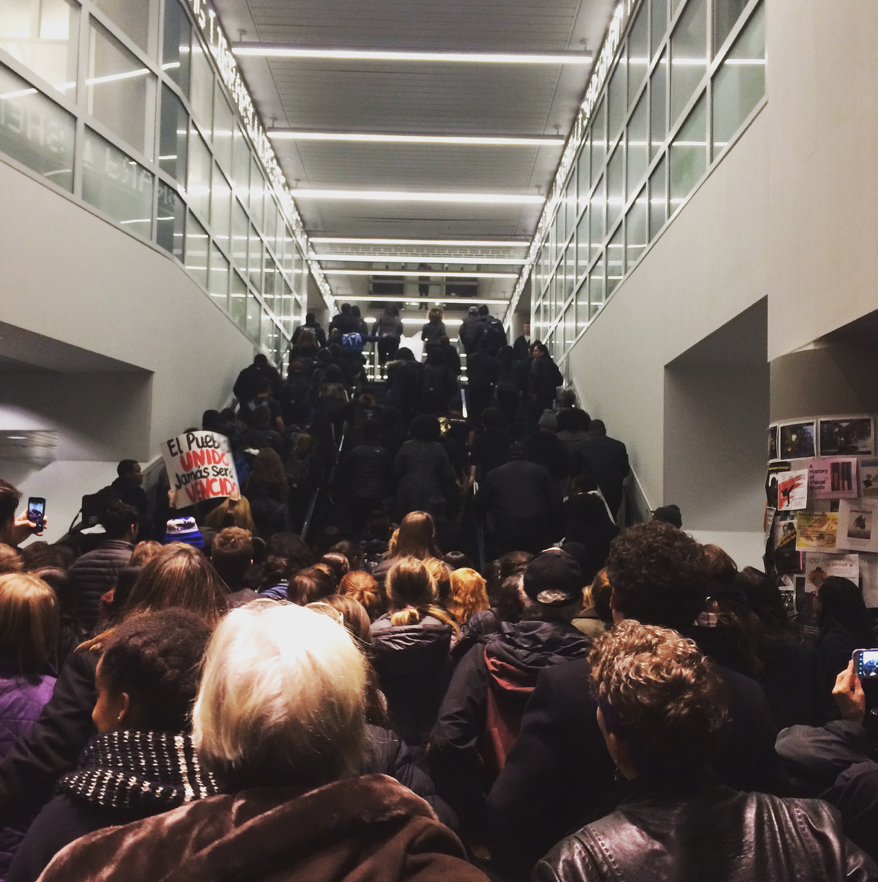 The large group of protestors began to move up and yell at students on first floor Berry. Students were again yelled at to stand up in support of the protest, and many did so, either out of support or fear.

After making a girl cry, a protestor screamed “Fuck your white tears.”

I was startled by the aggression from a small minority of students towards students in the library, many of whom were supporters of the movement.

From what I witnessed, a small number of the protestors resorted to aggressive verbal harassment. There was no physical aggression.

At that moment, the protest strategies became counterproductive; I chose to leave the event before it was over. Verbally harassing students, and disrupting people in the library is not an effective protest strategy and does not create constructive dialogue. The protest may have ended up polarizing the campus further.

It is important to note that a large majority of the protestors did not engage in harassment of other students, but they are now being labelled as aggressive because of the small minority.

In a recent email to the student body, Phil Hanlon encouraged students to “learn from the experiences of others, to recognize our limitations, to broaden our understandings, and to see issues from new perspectives.”

As a white male coming from a privileged background, I will never be able to fully understand the anger and outrage of the protestors who were screaming at people in the library.

But it is essential that the Dartmouth student body continues to have a dialogue about structural racism on campus, and in the United States, that is constructive, not alienating.