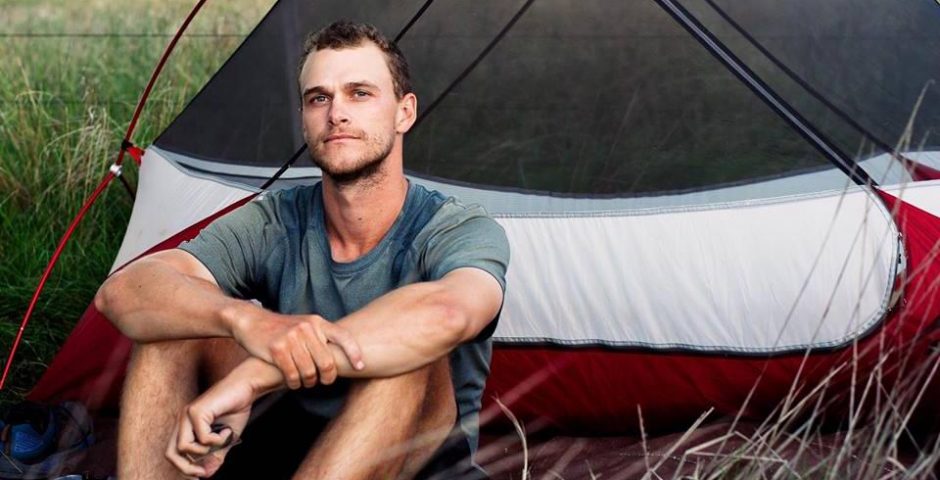 Sitting in our university libraries, many of us dream that we might one day be able to travel the world. For most people it stays a dream but for Tom Turcich it became a reality. After he graduated from Moravian College, a small liberal arts school in Pennsylvania, Tom worked to save up for his journey around the world on foot. We spoke to him 690 days, 16 countries and 10,000 miles through his five year trek, just as he reached Dublin.

Day 619. Wandering the plains of Argentina when I was sent this photo by Kaisa Siren. I met Kaisa at seven in the morning back in Reserva Los Flamencos. At nearly 5,000 meters it was 10° farenheit, I had my face covered to keep it from drying out. Meanwhile, Savannah was loving every second of the cold air. You can check out more of Kaisa's photos at www.facebook.com/valokuvaajakaisasiren (she's Finnish). #theworldwalk #travel #argentina #savannahtww

What is your background?

Over two years ago I left my home in New Jersey to embark on a five year, seven continent trek around the world. In Texas, I adopted a dog, Savannah, and we’ve been walking together ever since. I’ve been walking for 687 days and have covered 9600 miles over fifteen countries. Currently I’m in Dublin, about to take on Europe and North Africa.

My previous AMA was a year ago and I was in Macará, Ecuador. From Ecuador I walked through desert for months (and nearly lost my mind), did ayahuasca in the Peruvian jungle, climbed to 15,000 feet to cross the Andes, and stumbled upon the Argentinian Carnival. After South America I took a ship to Antarctica where I took a plunge in the icy waters and kayaked beside humpbacks.

Savannah was four months old when I adopted her. When she was a pup I pushed her in my cart. Now she’ll walk 30 miles a day and still be running around at night. In Central and South America it was fairly easy crossing borders with her. To get her into Europe we spent a month in New Jersey doing her paperwork (which is easier now than it used to be apparently). I’ve spent nearly every minute of every day with her since adopting her. She’s my best friend and a great watchdog at night.

Savannah in her summer cut. There was a moment during my break, when I found out Savannah's international paperwork was delayed, that I thought Savannah wouldn't be coming back to Argentina with me. For about an hour I slumped in a chair and didn't speak to anyone, unable to imagine not having Savannah to camp with each night. Eventually, my mind cleared and I realized I could probably pay to have my flight pushed back a few days. It cost me $300 dollars – a price I'd gladly pay again to have my best bud with me. Then Tuesday morning I received the paperwork, and that afternoon we flew out together. Just a day and a half from resuming our life on the road now. #theworldwalk #travel #argentina #savannahtww #teampixel

Why did you decide to do this walk?

As to why I'm walking around the world, I had a friend, Anne Marie, who died at 17. I'd never been close to someone who died before. Her death reordered my understanding of the world. I suddenly saw life as something fragile and fleeting. I needed to make the most of the short time I had – I wanted adventure and to see the world. When I discovered Karl Bushby the idea of walking around stuck in my head. So from 17 to 26 I kept The World Walk my aim. I went to college, worked, paid off loans, saved, then set off before I had too much responsibility. By 26 I had enough saved that if I lived frugally I could walk while still paying off my student loans for two years.

However, about a month before leaving, the owner of Philadelphia Sign reached out to me. He knew Anne Marie and wanted to support my walk. Now, Philadelphia Sign gives me enough money to see this thing through and donates a dollar a mile to Anne Marie’s scholarship fund. If you'd like to follow along I do my best to post photos daily and write a weekly blog post.

What's been the best thing about this project? What have you learned from your experience?

The best things about the project has been the freedom. I don't have to answer to anyone. I'm on no schedule but my own. When I'm tired I rest. When I have a lot of energy, I go. If I find a cool town I can stay for three or four days and leave when the mood strikes me.

The most impactful thing I've learned from this walk is how much impact governments have. At every border I cross the differences between countries is amplified. Both countries are still fresh in the mind and so the differences are apparent. Ecuador and Peru were probably the two most starkly different. Ecuador's border was developed, with nice facilities, but just into Peru and people didn't have running water.

Day 488. This shot is actually from way back at the Perú/Ecuador border. The first four days in Perú were so free of development I worried even finding water would be a problem. However, as I've made my way south the population and development has increased and finding water has been easy. #theworldwalk #travel #peru

What would you recommend to recent graduates that don't want to go the "traditional" route and would rather explore?

To recent graduates I'd say don't shy away from work. Working is a good thing. I love working. Not for someone else necessarily, but having a good work ethic is important. I worked like mad for eight years in order to give myself a chance of making this happen. I saved just about everything I earned for years so that I might be able to walk for two years. I was then fortunate to have Philadelphia Sign sponsor me which turned a potential two years into the full five years I dreamt of.

Do you have a favorite memory from this walk?

So many memories… the one that really stands out though is sleeping on my tarp in the Atacama desert in Chile. I've never seen so many stars. There were so many that when looking at them they felt like a weight on my chest. The pressure was unreal. I've never felt so insignificant.

Day 587. Sav and I will be passing through our last Chilean town today, San Pedro de Atacama. From there it's up into the massive nature reserve Los Flamencos where there are volcanoes, salt lakes, and, of course, flamingos. I doubt there will be cell towers up there so this may be my last post for a week or so. Savannah is doing really well, no signs of ever having been sick. Argentina here we come. #theworldwalk #travel #chile

And finally, what do you hope for the future?

I just hope to have enough to buy myself a plot of land and build a house on it. That would be really nice.

Day 317. Me and the pup at Finca Bellavista. We're back on the road, slightly more than a day from the Panamanian border. Felt good and familiar in my tent last night. Photo credit to @mypictureatlas #theworldwalk #travel #costarica #savannahtww