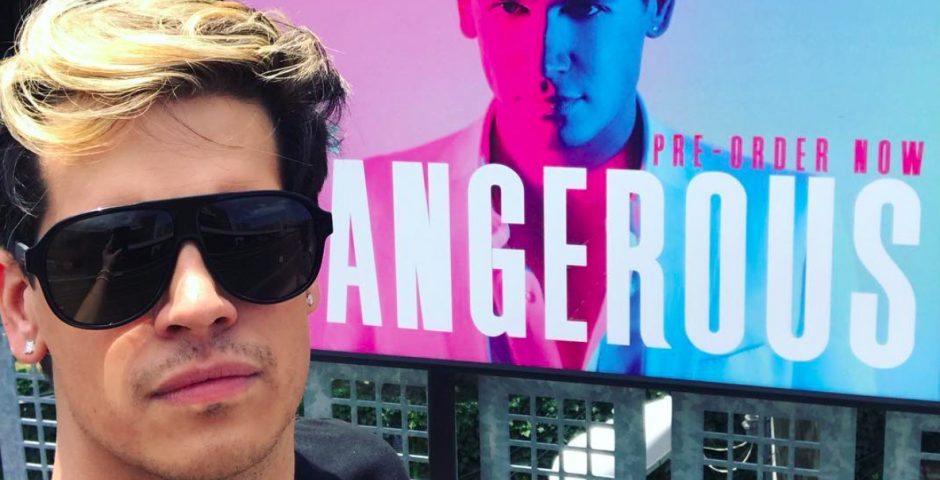 Although ‘laughter and war is my motto’ may or may not be the best way to live your life, to each their own

Last week, Milo Yiannopoulos launched his self-published book, Dangerous, in the first real attempt at a rebound from a scandal-strewn February, which saw him accused of condoning pedophilia, removed as keynote speaker from a conservative conference in Washington DC, and dropped from his original book deal by Simon and Schuster.

Milo, however, is not easily kept down. He describes how the success of his book, which sold 100,000 copies in eleven hours, “has once again reaffirmed what everyone said, which is if you come for me, you better make sure you leave me in a coffin because if you don’t completely destroy me, if you don’t completely take me out, I will be back ten times stronger in a couple of months.”

Milo also has a message for College Republicans and libertarians.

In our exclusive interview he tells me, “Laughter and war is my motto.  I want people to never flinch, and never stop fighting, but I also want them to have fun.  I would just encourage young Republicans and libertarians to keep laughing, because progressives are fucking ridiculous.”

He uses the example of pick up lines, and how “they are supposed to be purposefully awkward statements that break the ice.  Laughter is how you bond with people, not how you drive people apart.”

Milo also claims the success of such an outlook is proven by the presidency of Donald Trump.

“Laughing is what put Donald Trump in the White House. The memes, the mischief, the fun, and the dissidence.  He literally trolled his way into the White House by making people laugh, and this is what the left forgets.”

Although even Milo will admit that there is a fine line between offensive and humor, and the masses will agree that he has a known reputation for pushing it: “I think people forgive something that’s twice as funny, or twice as meaningful, or twice as thought-provoking as it is offensive.”

He also feels that the benefits of people walking the line between humor and offense are exemplified by people like Trump and himself.

“I understand that if the whole world was provocative, British fags who said, ‘feminism is cancer’ it would be chaos.  But, it is important that some people are like me, because what people like Trump and I do is enable others to feel a bit more comfortable expressing themselves further.  These days, if you are a Republican or a libertarian in this country, some of your opinions, perfectly reasonable, respectable opinions that come from a good place that have facts, reason, and logic, are considered hateful, sexist, racist, when they are not.

“I am happy to be the sacrificial lamb, I am happy to draw all the firepower, if it means that people who read me and enjoy me feel a little bit more confident about expressing themselves in their private lives.”

And while he admits that his book holds little academic value, he still strongly encourages people in academia to read his book because, “it’s one of those books that just sort of comes along at the right moment and captures people’s imaginations and says what everyone is thinking.

“I think that every professor in America and every student in America should read it, whether they come to it with skepticism or whatever, and think about it.  They can spend a couple of days thinking about it, and I think it would immeasurably improve this country’s higher education, because what this book demonstrates is that you can be very right-wing and still not be a hateful person, as is commonly characterized by Hollywood, the media, academia, by everything.  You can have very strong nationalist, populist, conservative points of view, and be the loveliest, warmest person in the world.”

While those who meet Milo describe him as disarmingly nice and charming, often his supporters are denounced as “deplorables.” But Milo passionately advocates for them: “When I see them called deplorable, sexist, homophobic, and racist I think, ‘you know what, fuck you,’ because I meet these people everyday, I go on college campuses and I speak to anywhere from two hundred to twelve hundred people, and they are some of the warmest, nicest, decent people.”

To illustrate this, Milo describes a speech he gave in Louisiana as his drag persona, Ivana Wall.

“I gave a speech about oppression, and how it was a moral imperative, and I got a standing ovation from 1,200 Louisiana Republicans.  When I compare that with the viciousness, spitefulness, and meanness of the progressive left and how they treat me because I’m gay and have the wrong political opinions, I know where I would rather live, and I know who I would rather hang out with and it’s not the liberal bloggers in New York, it is real America, which is a continent I am growing to really love.”

It’s up to you to decide if Milo’s passionate love for the United States is a good thing or not.