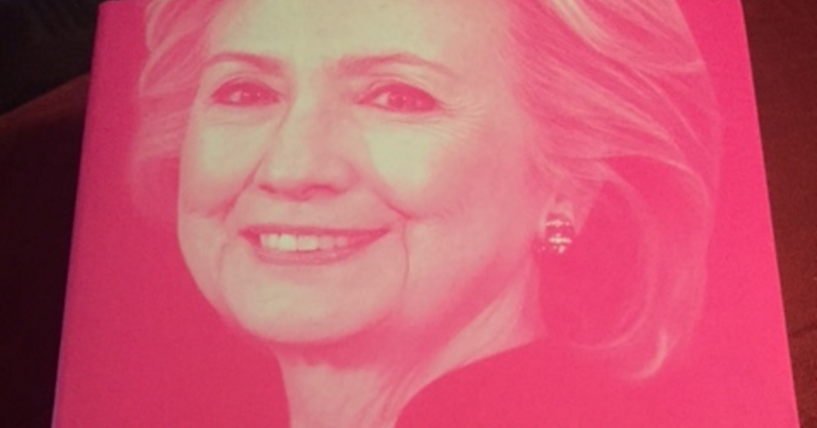 While reading ‘False Choices: The Faux Feminism of Hillary Rodham Clinton’ two women sitting on the train asked me about it, and wanted to read it for themselves. I was drawn to the book, edited by Liza Featherstone, as a feminist during this tumultuous election season.

Hillary Clinton is a mainstream feminist icon and the Democratic nominee for president. If she becomes President of the United States, that glass ceiling will be shattered – but only really for wealthy, white women like Clinton. 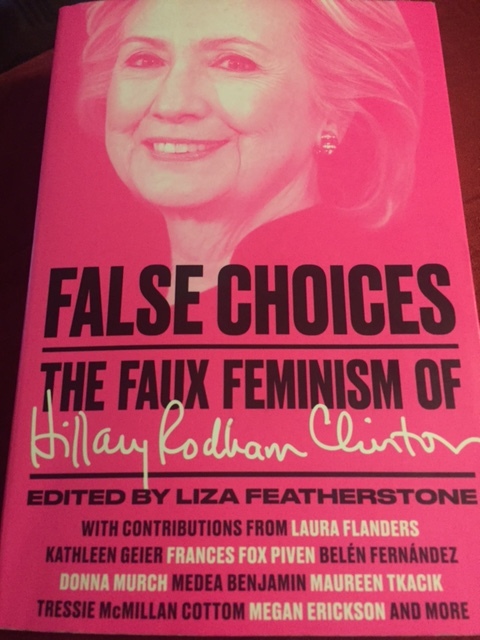 This book consists of essays by feminists of various backgrounds critiquing Clinton’s policies, which have by and large, actually done more harm for women than good both at home and abroad – especially harming poor women and women of color.

The book is divided into two sections – ‘Hillary at Home’ and ‘Hillary Abroad.’

One essay I found particularly compelling in ‘Hillary at Home’ was “Abortion and the Politics of Failure” by Maureen Tkacik, the essayist and financial journalist who’s also the founder of the popular women’s site, Jezebel.

Tkacik argues that Hillary’s involvement in the abortion lobby and her so-called “pro-choice” politics might not actually offer many women a choice. For instance, one of Hillary’s big backers is the organization EMILY’s List, a pro-choice organization. While they spend a lot money and put a lot of effort into abortion access, they don’t do the same with other things such as universal Pre-K or maternity leave. Because of this, many women who have abortions might not actually do so out of choice, but simply because they cannot afford to provide for a child they otherwise might love to have. Thus, the “choice” is removed from “pro-choice.”

The essay I was most drawn to in Hillary Abroad was “Hillary Screws Sex Workers” by Margaret Corvid, a journalist based in the UK whose work has appeared on popular sites like The Guardian, Cosmopolitan, and The Establishment.

In this essay, Corvid discusses Hillary’s conflating of all sex work – even the consensual work women may choose simply to make a living – with trafficking. This conflation is harmful because Clinton, with her white, wealthy, Western privilege, sees sex work, regardless of the context, as harmful to women. What she fails to realize is that in many non-Western nations, women may have no other avenues of livelihood. But instead of listening to these sex workers and pushing for decriminalization, she instead considers all sex work under the umbrella of human trafficking and looks to make it completely illegal.

Corvid quotes an interview Clinton did with a small newspaper in Nevada, where she says, “I do not approve of legalized prostitution or any kind of prostitution. It is something that I personally believe is demeaning to women. I have worked against it and I have certainly taken a very strong stand against what happens in many parts of the world where young girls and women are forced into prostitution against their wills.”

Again here, we see Clinton equate all prostitution with trafficking without any mention of other reasons why women would become engaged in sex work.

Corvid goes on to discuss how human rights organizations like Amnesty International, UNAIDS, and Human Rights Watch have spoken out to end the criminalization of sex work because of how it often harms poverty-stricken women just looking to get by. But still, Clinton’s State Department funded American “rescue industry groups,” which are largely led by white Christian men, to “save” sex workers overseas. However, these groups rarely provided housing, medical care, or food to the women they supposedly “rescued” from sex work. This is just another example of Clinton’s White Savior complex that ultimately harms the most marginalized individuals overseas.

In the conclusion of the book titled “Beyond Hillary: Toward Anti-racist, Anti-imperialist Feminisms,” Zillah Eisenstein, a feminist theorist of 35 years, says, “Hillary Clinton’s brand of feminism – power feminism, imperial feminism, white ruling-class feminism – is not the answer to this moment of crisis. And the answer must be about so much more than gender. Anti-imperial feminism must engage the multiple and complex identities of gender – racial, class, sexual, age, ability, trans, and national.

But imperial feminism props up the structural misogyny of empire even while critiquing discrimination toward women. A woman without an inclusive anti-racist, anti-imperial feminist agenda cannot either imagine or create the conditions for peace and justice. So Clinton, by showing that a woman can lead and drive imperialism, might make a difference for a few, but she cannot make enough of a difference for most people of the suffering globe.”

With Clinton as the official Democratic nominee, I think it’s important for every voter, especially women and those who identify as feminists, to read this book and become educated of the harm the supposedly left-wing candidate has caused both at home and abroad. While it would be fabulous to have the first woman president and thus catch up to the rest of the developed world in that regard, the gender of our Democratic candidate is certainly not all that matters. 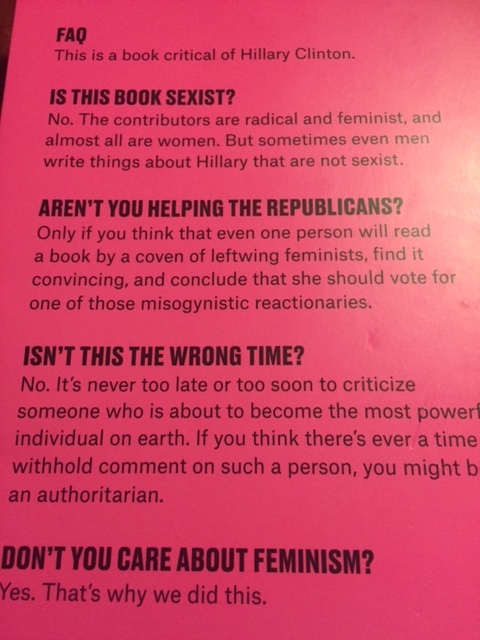