The committee passed a motion of no confidence

The Secretary-Elect of the York Tory Society has resigned over previous comments made in a conversation regarding rape, that have recently surfaced online.

Last Friday, the York Tories committee say they were made aware of said allegations and after an investigation, a “Motion of No Confidence” was submitted by the Chairman. The Secretary was then asked to resign from the position or face a vote of no confidence, this member took the decision to resign and is no longer part of the York Tory Society Committee.

In the resignation letter, the ex-Secretary-Elect says: “The bulk of the allegations surrounded a conversation I had with a girl with whom I attended secondary school. The conversation entered around a rape case in Peru.

“While I stand by my argument, the phrases and format of it were, in places, imperfect. I understand that this may have caused misunderstanding over the argument I was making, and the fault for that lies largely with me. I intend to apologise to any people offended, no matter how inadvertent that may have been. I continue to condemn crimes of all natures, including sexual offences.”

The letter also addresses “a small number of other allegations made against them”. The ex-Secretary-Elect says in their resignation letter: “These allegations are wholly false, I have never and will never hold views that are racist, sexist, homophobic, disablist or based on any other form of discrimination.”

Screenshots have surfaced online seeming to show the ex-Secretary-Elect saying a number of offensive comments. These seem to show the Secretary using the word n-word on social media and saying “there’s a huge difference between saying n****r and n***a”. 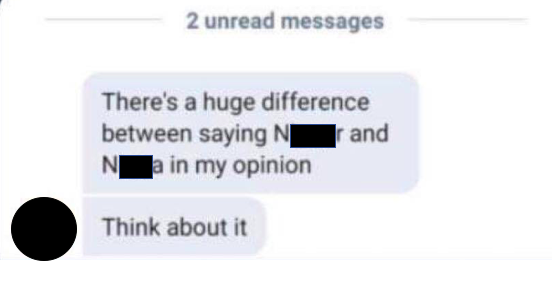 Others seem to show them saying “people can’t re-appropriate slurs”, that the British Empire was a “force for good” and that “we should probably bring it back”. When asked the question in one exchange “would you have owned a slave then?”, the reply was “in the context of history, yes”. 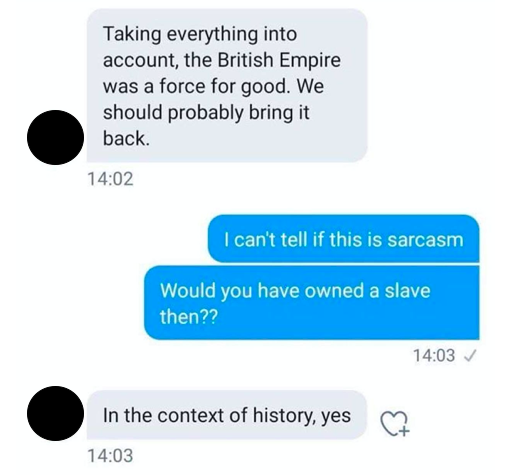 When the York Tab put these screenshots to the ex-Secretary-Elect, they told us the comments “are all cases of nuance or things being taken out of context.” When asked to clarify or expand on this, they said they had no further comment to make.

In the resignation letter, the former York Tory Secretary-Elect said: “While I dispute all the accusations levied against me over the last week, I understand fully the impact they have made upon the Society. Our Society has a strong and respectable reputation, both on the University’s campus, and within the wider Conservative Community. That crucial reputation must be protected.

“I therefore believe that, while I would serve in the office of Secretary effectively and dutifully, it would be an unnecessary distraction for me to continue as Secretary-Elect. Our society does great work, and the focus must always be on that.”

The York Tory Society told The York Tab, regarding the comments made on rape by the ex-Secretary-Elect: “On Friday afternoon, the York Tories committee was made aware of comments made by a member of our committee on social media. After an investigation by the Internal Vice-Chairman to establish the nature of these comments, a Motion of No Confidence was submitted by the Chairman and the member was asked to resign from his position or face a Vote of No Confidence at the earliest possible point.

“The member in question has now resigned and is no longer part of the committee. The York Tories would like to make clear that the society and its committee do not agree with, or endorse the comments that were made by the member. We will always condemn this sort of behaviour from any member of our society, and stand with victims of rape. We will not be commenting any further on this matter.”

The Society also commented on other allegations made against the former Secretary-Elect: “The York Tories have been made aware of comments made by (now resigned) Secretary-Elect of the York Tories. Whilst the society wishes to make it clear that the majority of the comments by the member seem to have been made before he was a student at the University of York, we were committed to acting swiftly when [their] comments came to light.

“As soon as the committee were made aware of the allegations, the matter was referred to the SU and an evidence-gathering investigation by our Internal Vice-Chairman was launched to establish the nature of these comments. At the conclusion of this investigation, a Motion of No Confidence was submitted by the Chairman of the society to remove the member from his committee position. The member was asked to resign from his position or face a Vote of No Confidence at the earliest permissible date.

“The member in question tendered his resignation on Wednesday 18th November and is no longer a part of our committee. The Internal Vice-Chairman has referred the investigation to the University of York Student Union (YUSU), who will now investigate further. A new secretary has been elected to the post.

“We now consider this matter closed on the part of the society. The York Tories would like to make clear that the society and its committee do not agree with, nor endorse comments made by this member. We will always condemn this sort of behaviour from any member of our society and treat these allegations with the utmost seriousness. We have strong disciplinary and accountability guidelines which, as you can see, are working as intended. We will not be commenting on this matter any further.”

When asked for a comment, a YUSU spokesperson told The York Tab: “The student concerned has submitted his resignation and we now consider the case closed.”

When contacted, the University of York declined to comment.