A black student in halls at Warwick opened her fridge to find racist remarks written on her bananas.

The Tweet comes from @Faramade_ showing a bunch of bananas with “monkey!” and “nigga!” written on them in black pen.

Her Tweet says: “Just entered the kitchen and look at what one of my flatmates has done. I am extremely disgusted.” 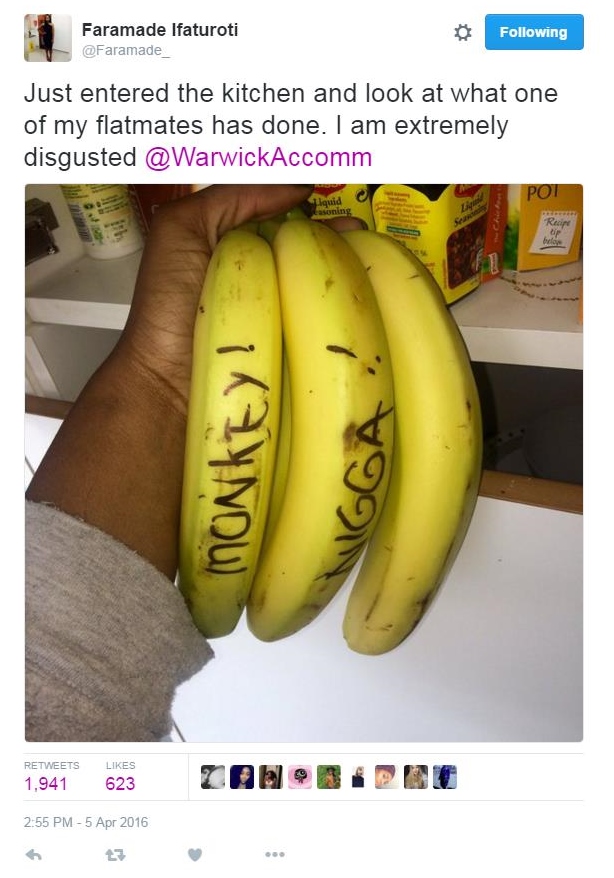 The Tweet in question shows racial slurs on a banana

This has prompted a wide array of replies, from discussions as to whether the “male and pale” Sabbatical Officers will tackle the issue.

Shore Delano, a student at the university said: “That sort of behavior warrants being kicked out of university at the very least. Bullying, and blatant racism, I’m actually in shock.”

Charlie Hindhaugh, current Warwick Education Officer said: “This is absolutely disgusting and unacceptable and the manner will be taken seriously by the university.”

Warwick University has released a response, stating: “Warwick SU has a zero-tolerance policy on racist behaviour. We unequivocally condemn this shocking and disgusting act, which should clearly have no place in either our University or society at large.”

Warwick Anti-Racism Society have commented on the issue: “The Warwick Accomodation handbook has absolutely nothing regarding racism, yet the institution will happily shout about diversity and champion signing the Race Equality Charter. We deserve 0 tolerance to racism on our campus. They make it clear that THIS IS NOT AN ISOLATED INCIDENT.”