A University of Southampton student has taken his own life

He was found in his student home by his father

Thuvahrakan Thangeswaran, a 20-year-old student at the University of Southampton, was found dead at home, with an inquest hearing that a note referring to debts and university struggles was also found.

Known as ‘Thuva’, Winchester Coroner’s Court heard he had spoken on the phone with his brother around 11am on 27th January about going back home to London, but after he failed to return, alarms were raised. Thangeswaran’s father, Alagiah Thangeswaran, drove to the house he shared on Spear Road that evening, where he found the bedroom door locked, and after kicking it down, his son hanged.

According to Police, the note made reference to “debts with many people, including payday loan companies and that he was not doing well with his studies”, and his father has revealed in the days leading up to his death, his son had asked him for money.

A toxicology report also found THC in Thangeswaran’s body, which indicated the use of cannabis, however senior coroner Grahame Short said “There is no clear evidence this precipitated mental illness, but I cannot rule out it contributed.”

In his conclusion of suicide, Short added “I think he probably suffered from depression, although he was not receiving treatment at the time. It is apparent that Thuvahrakan suffered from low self-esteem and was unwilling to admit to his family the extend of his troubles.”

Thuva’s former school, Paddington Academy in London, posted on social media: “Thuva was a much loved and dedicated student… He will be remembered very fondly by staff and former students of Paddington Academy.”

A spokesman for Southampton University stated “We are extremely saddened by the death of our former student. Although Thuva’s studies had finished prior to his death, we liaised closely with the family offering our condolences and ongoing support, as well as our students and staff who might have been affected by the news.”

The university also added “We take the well-being of all students extremely seriously and encourage anyone who may be experiencing personal issues to contact the University’s Student Life team to access support which is available 24-hours a day.”

With Mental Health Awareness Week having taken place less than a month ago, this sad news hits home that there is still much more to be done in the way of supporting young people; especially young men. 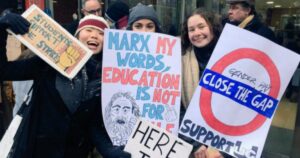