He previously said he would not resign following allegations of antisemitism

An NUS committee member has resigned following allegations of antisemitism sparked by tweets he posted.

Ayo has not apologised for the tweets, and has strongly denied the allegations of antisemitism. 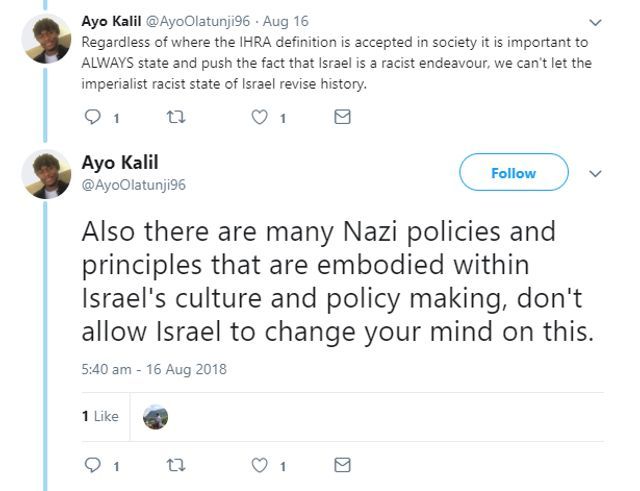 One of the tweets posted by Ayo

A statement released by the Union of Jewish Students reads:

"We are pleased that Ayo Olatunji has resigned from NEC of the National Union of Students.

"Olatunji deliberately caused deep hurt to Jewish students with his antisemitic comments. We have been clear throughout this incident that antisemitism and Holocaust inversion have absolutely no place in the student movement and neither do those who knowingly engage in it. We expect NUS to always enforce their own policy on antisemitism.

"We would like to take this opportunity to once again thank the hundreds of students, students' union sabbatical officers, and NUS NEC members who have stood with us in the fight against antisemitism."

"I unequivocally deny these claims, I'm not an antisemite, neither do I believe my comments to be antisemitic, they were sourced from a Holocaust survivor and my anti-racist work at UCL against the racist science of eugenics, the science that made the Holocaust intellectually possible is a clear example of that for those who genuinely take an interest, the biggest manifestation of this is UCL due to opening a centre on the study of race and racism.

"Throughout the time these claims have been thrown, the NUS have refused to let me know the structural proceedings of my case, showing a lack of professionalism and impartiality, their minds were already made up.

"My resignation was done in order for this not to become a distraction for those who genuinely wish to organise within NUS and bring much needed structural change. Staying in such an organisation would have meant I would have ended up compromising my integrity and character."

• The NUS are spending £60k on a demo, but they don’t know what they’re protesting about