Earl Grey was a career reformer who abolished slavery

The past week, ever since the people of Bristol definitively made their feelings known on slave traders, numerous statues of problematic historical figures have been targeted by Black Lives Matter protestors. Presumably, the intent is to give these effigies a similar fate to that of Mr Colston.

Activists have even drawn up a map of statues and monuments which celebrate Britain’s colonial past, with the goal of “shining a light on the continued adoration of colonial icons and symbols”. In reply, anti-BLM protestors have taken to the streets to protest the protests, to polarising commendation and condemnation. Whoever had “statues to become the most important thing in the country, and not just to pigeons” on their 2020 bingo card, your number is most definitely up.

One monument which we can safely say shouldn’t be getting targeted, however, is our very own Grey’s Monument. 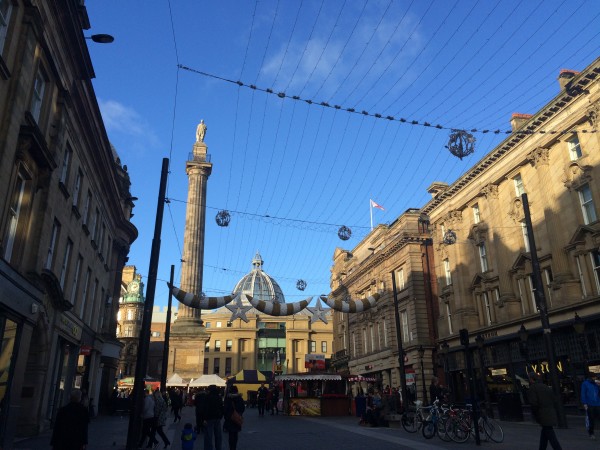 The monument pays homage to Earl Grey, the 19th-century politician and eventual Prime Minister (1830-1834), who was central to numerous reform movements during his career. Yes, he might have had a blend of tea and a city centre pub named after him, but his unquestionable biggest achievements were passing the much-opposed Great Reform Bill of 1832 which reformed the House of Commons to make it fairer and, of course, abolishing slavery in the British Empire the following year.

It is no coincidence, then, that nearly every demonstration against oppression in Newcastle (and there’s a lot) starts at Grey’s Monument. Be it anti-Trump rallies, Women’s Marches or Extinction Rebellion protests, all make a point to include the late Earl into their itinerary. Some might call it a coincidence, but when Nigel Farage’s day out in the Toon was cut short by a rogue milkshake, it happened in the shadow of the Monument.

Chaotic scenes in Newcastle city centre as Nigel Farage hit by a milkshake. He’s been whisked away by his security. This is the aftermath. pic.twitter.com/qxz8yay492

It did make a very brief appearance on the aforementioned list of target statues before quickly being removed, which we can presume is what prompted several self-appointed “Defenders of Newcastle” to take to the Monument to prevent any possible vandalism during today’s BLM protest, as reported earlier today. Violent confrontations between “Defenders” and police subsequently occurred, with most reporting that the BLM protestors behaved peacefully despite this.

The “Defenders” set up camp next to the Monument despite the fact that, as one Twitter user astutely pointed out, the Earl stands over 40 metres above the ground.

Not the gammons out to protect greys monument, cunts 250ft In the air who’s gonna touch it man 😂😭😂 pic.twitter.com/7VKabRGcuQ

Local BLM protestors have not announced any intent to deface the Monument (though even if they wanted to, they’d certainly require a bulldozer or a green superhero to pull it off). Indeed, activists have specifically cited his role in the abolition of slavery as a reason why they have no interest in doing so. After all, it would be somewhat counter-intuitive to protest oppression by vandalising the man who once resigned from the government for wanting to grant further concessions to Britain’s Catholic population.

Newcastle has a long history of unity and anti-racism, as evidenced by the multitude of protests we’ve seen as well the warm welcome afforded to Mr Farage. Fortunately, the vast majority of discourse surrounding today’s events by Geordies has sought to distance themselves from the actions of a loud minority.

In these turgid times of statue-based political controversy, it is refreshing to see the city’s most famous effigy emerge as such an unproblematic beacon of light.

• Newcastle University student calls out the Uni for lack of diversity

Five ways that you can still celebrate Pride in Newcastle

Because how else would you try to calm tensions over local anti-social behaviour, if not by committing minor assault?

Eight reasons why you should stay in Newcastle for summer

Thinking of spending summer in the Toon? If not, here are some reasons why you definitely should

It’s the UK’s second loss in a row

I attempted a night out sober and learnt these eight things

We spoke to the ex Newcastle students behind TREB, the city’s latest alcohol venture

Yes, I’m that desperate for a first

The definitive ranking of buildings at Northumbria University

A lighthearted look at the best to worst of Lipman, Ellison, and all the rest.

WARNING: This article contains spoilers of the Line of Duty season six finale…

The eight best (and worst) things about being single in Newcastle

The empty Frankie and Benny’s restaurant close to Northumbria University is set to be turned into a new food court offering a range of in-house brands.

The Vice-Chancellor was pleased but not finished yet: “We are not complacent…”

Five alternatives to throwing your old clothes in landfill

Charity shops aren’t the only answer

Newcastle students could FINALLY be getting a Lidl

They even PLANT A TREE with every order made, omg

From ‘Get Carter’ to ‘Vera’, the North East has welcomed some huge television and film crews

Every crystal you need for your Newcastle-student-specific problems

Searching for a Jesmond lover? Let rose quartz help you with that

‘I wish I was a lesbian’: 31 things queer women are sick and tired of hearing

‘My boyfriend wouldn’t care if I kissed you right now’

Finally, I can sleep at night

Larissa has a double law degree AND a bachelor of arts