It was on the day of my final exam

I have had an IUD (also known as a copper coil) for two years now, and was confident that this was a nearly 100 per cent effective method of contraception.

However, during the June exam period I began to feel incredibly nauseous and realised my period was a little late. I took four pregnancy tests on the day of my final exam, and as they were all positive, instead of going out celebrating, I began researching medical abortions. This is an account of the process itself, followed by a letter I wrote the day after I found out that I was pregnant.

One in three women will have an abortion at some point in her lifetime, and this is by no means an "easy way out". I feel so lucky that I live in the UK where access to a safe, legal abortion is simple and for many, available on the NHS. Having a baby at this stage of my life would have a huge impact, not only on me, but on many people around me (not sure my housemates would be thrilled to discover the fifth resident is a few-month old infant!) It would also impact the life that child would have, and currently this is not the life I would want to provide.

On the morning of my last exam I woke up feeling nauseous, and even the smell of plain toast made me retch. A thought popped into my head so I began doing period maths and didn't like the answer I came to. I grabbed a pregnancy test (I'm very paranoid so always have some under my bed) and headed to the bathroom. Two little lines appeared and I had to check the packaging about five times to understand what I was seeing.

After doing another pregnancy test, I shoved my emotions into a little box and headed off to my Pharmaceutics exam (for those of you who may be concerned: No, I didn’t apply for mitigating circumstances. Yes, I still passed.) After the exam, I bought a branded pregnancy test, just in case my cheap ones were actually some sick prank tests that would always be positive. The third and fourth tests agreed with the first two.

The reality of the situation began to sink in and I already knew what I would have to do, so I began my research. There's an overwhelming amount of material online about medical and surgical abortions, but unfortunately a lot of it is emotional scaremongering published by pro-life organisations, so this was not an easy process. 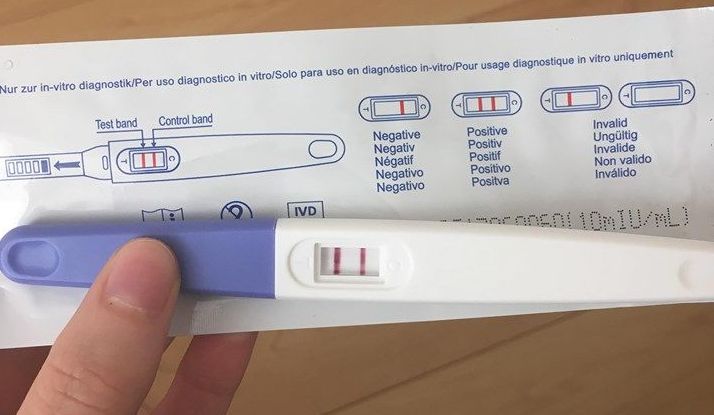 I’d already agreed to host pres, so I had potentially the world’s most depressing baby shower: Lidl own-brand lager in my student living room. In a dramatic game of "never-have-I-ever" I dropped the bombshell on my mates. They were incredible – I’ve never felt so much love, and I joked they had hugged me so hard I actually wouldn’t need to bother going to the clinic.

I went to the GP who confirmed I was pregnant, and referred me to a NUPAS clinic. I got an appointment the following day, and found myself sitting in a depressing waiting room, filling out forms about my sexual history. I had the overwhelming feeling I didn’t belong in this room. I had done everything I could to avoid this exact situation, and it just didn’t feel fair.

I was taken through a procession of rooms where various tests were performed, including an ultrasound. I refused to look at the screen, and choked back sobs as I was told that I was at six weeks. This meant I was eligible for a medical abortion, but first I would need to get my IUD removed.

This completely upset my timeline. I had originally been intending to return home that weekend, but that was clearly not going to happen. Time for a very awkward telephone call with my mum. Luckily I have a pretty close relationship with my mum so she was really understanding, and ended up travelling up to Manchester and staying with me for the rest of the process.

I got the IUD taken out at a walk-in in Stockport. It was a very simple process – quick cough and it was yanked out. I could now go ahead with the abortion itself.

A medical abortion is carried out over two days. The first day, I had to take one tablet which essentially halts the pregnancy from progressing any further. This was fairly uneventful, but the antibiotics I also had to take made me violently sick.

The following morning I had to go back to the clinic and take a whole concoction of pills. First, more antibiotics and some painkillers. I then had to use a painkilling suppository (arguably one of the most unpleasant parts of the whole thing). Finally, I was given four hexagonal pills which I could either dissolve in my cheeks, or in my vagina. I think you can guess which option I chose. These were going to initiate the labour process.

I had already decided that I wanted to get home as soon as possible, so instead of resting at the house as recommended, my mum and I embarked on the six hour drive back to Kent. The cramps I experienced are like no period pain I have ever had before, and when we stopped at a service station near Newport Pagnell I stood up, revealing a massacre on the front seat. I made it to the toilets, and I won’t go into detail, but the clinic told me to expect clots the size of my fist, and hell they were not exaggerating. We eventually made it home, and I slept for two days.

I continued to bleed for a month, and I experienced some awful nightmares. I’m still processing a lot of what happened but I’ve come to accept that it was out of my control and I made the right decision for me and for the foetus. I have no idea what the future will hold for me, but I know that having survived this, I am a lot stronger than I thought, and ready to deal with whatever next year throws at me.

This experience has also put me into contact with some of the kindest women I have ever met. Each and every one of the nurses, doctors and HCAs who have been part of this, as well as all the men and women manning the various phone lines I’ve had to use, have been nothing but supportive and compassionate. This process could have been even more difficult if it weren’t for your professionalism, warmth and kindness.

What happened to me is incredibly unlikely, so if you have an IUD don't panic. It's still a very effective method of contraception. I've now got an appointment to get an IUS fitted, which is the same idea but with the addition of hormones for an extra method of preventing pregnancy.

I'll never meet my son or daughter, but if I did I'd want to tell them this:

To my little Bean,

You are still growing inside me as I write this, although if all goes to my current plan, not for much longer. You are not actually even the size of a bean yet, smaller than an apple seed, and more like a tadpole than anything else. But you’ve already made your mark; a lot of nausea, a lot of tears, and a strange craving for cheese are all your doing. Four positive pregnancy tests despite my carefully inserted IUD, and within the space of 24 hours you’ve turned my life upside down.

I keep catching myself cradling my stomach, although there’s nothing to show for you yet, and I can’t decide if this is instinct or imitation. And you won’t ever really be mine to cradle. You won’t ever smile, say your first words or learn to walk. And I’m trying incredibly hard to be okay with that. To remind myself that you are just a bundle of cells, and not really a baby. My baby. Because now is not the time for me to bring a child into the world. I’m barely out of childhood myself, and nowhere near financially or psychologically stable enough to be a proper mother to you. It would be unfair to both of us to carry on this pregnancy.

I won’t lie and say that this experience was something that I would have asked for at this point, but I’ve already learned so much from you. You’re proof that I can have children, something which I’d always slightly doubted as my periods are incredibly infrequent and irregular. You’re also proof that I have a maternal instinct, as already I’m becoming attached (this letter is evidence of that!) I also feel like in the future, if/when I decide to start a family, I’ll be better able to recognise these early warning signs and truly listen to my body. You’re also a reminder of how incredibly young I am, and how much of life I still want to experience before I ‘settle down’. Finally, your presence has shown me, that no matter how independent I am, the support network I have around me is incredible, and I feel so lucky to have so many people to rely on when the impossible happens.

In front of my friends and family I’ve tried so hard to be strong, and people keep saying how incredibly calm I seem. And I am already working through the complex tangle of difficult emotions I’m experiencing: grief, guilt, anger. I’ll stop using dark jokes about coat hangers to hide how much I’m hurting, while I desperately try to draw out the slithers of positivity. I truly hope that the sharpness I feel right now will fade with time and I’ll be able to process this properly.

So, Bean, this is goodbye for now, but trust me when I say that this has been the hardest thing I have ever had to do, and believe me that I won’t ever forget you. When I hold my first child I’ll remember sitting on the bathroom floor of my student flat holding that first positive pregnancy test in utter disbelief, those two lines the first evidence of your existence. And every time I see a pregnant woman on the bus, or a mother with her children in the park, a little part of me will grieve for you and the life we could have had, in a different time. I never thought I could feel this much love and pain for someone I have never met, but my little Bean, I really do love you, and my heart breaks that I have to be responsible for our ending.

The mother that never was.

Pregnancy Crisis Helpline provides free, confidential support around unplanned pregnancy and abortion, and can be called on 0800 368 929.

Thank you so much to the following for being there for me; your messages and visits have meant everything. So a huge thank you to all of the staff at BPAS, NUPAS, Stockport Choices Centre and Ailsa Craig, NW, TW & MW, CMcV & LMcV, GC, TGC, AE, HS, JO, AH, AW, AC, RBJ, LD.