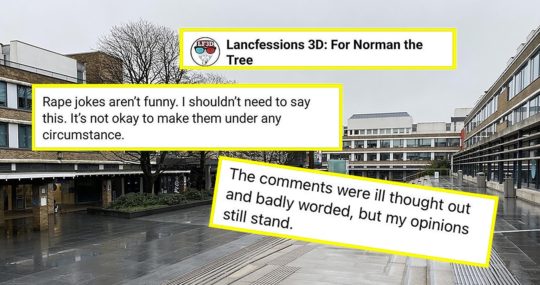 ‘If I do offend or trigger someone, I don’t see that as much of a problem’

A Lancaster uni student who made a rape joke on Lancfessions has spoken out saying: “The comments were ill-thought out, but my opinions still stand.”

When a Lancfession was posted about the severity of rape jokes, the Lancaster student in question  commented to argue that rape jokes are funny, before proceeding to tell the rape joke: “What do you call a gun that rapes people? An assault rifle.”

He was slammed by other Lancaster students who were disgusted by his insensitivity. Elliott, a graduate from Bowland, said: “Dude you are straight up, flat out fucking vile and I hope life treats you fucking horribly.”

The Lancfession was posted on July 27th, which stated: “Rape jokes aren’t funny. I shouldn’t need to say this. It’s not okay to make them under any circumstance.” 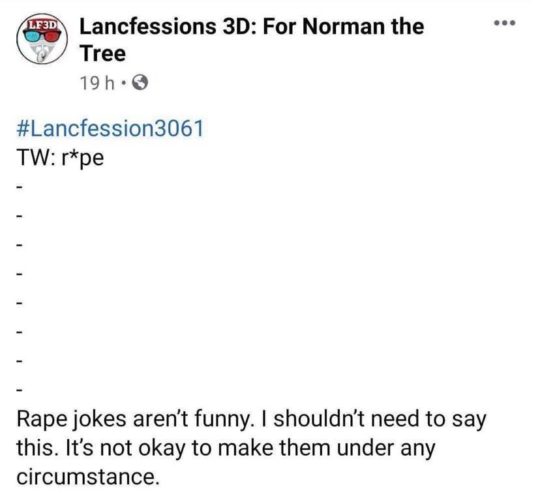 The Lancaster student commented: “Some jokes that include rape are funny, it depends on the context and who the target of the joke is. If you just point to a rape victim and say ‘lol’ then it’s likely not going to go down well, but that’s not the only type of joke that includes rape and is funny.”

He then went onto say that comedians tell jokes including sensitive topics and they shouldn’t be banned. The student said: “Ricky Gervais has some good comments about this topic. But no jokes should be banned, that’s far too authoritarian.” 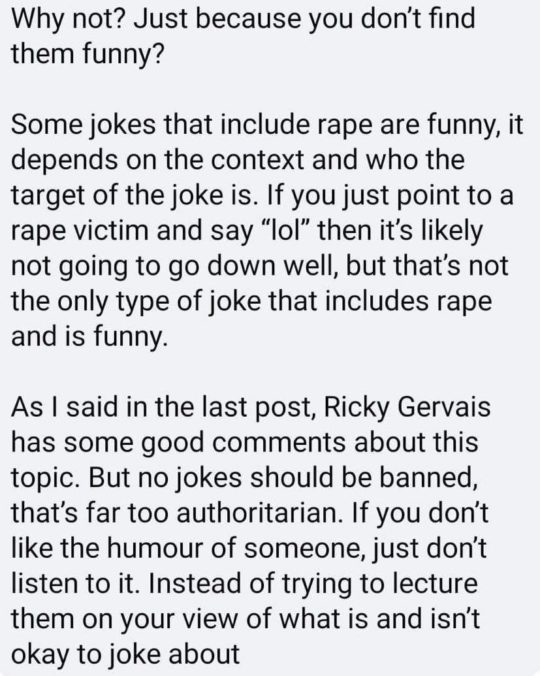 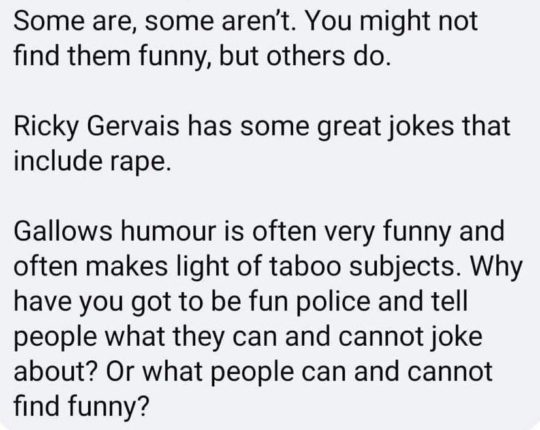 Then the student said: “I know you don’t like rape jokes but I’m going to force one on you anyway…” and proceeded to tell another joke.

‘If I do offend or trigger someone, I don’t see that as much of a problem’

We contacted the Lancaster Student who made those comments and he said: “The comments were ill thought out and badly worded, but my opinions still stand. This may be a cliché to you and many others, mostly due to the repetitive use of the phrase (or variations), but I truly believe in the freedom of speech to say your opinions and views to the fullest extent possible. I don’t mean to offend, or as you said, trigger.

“But, if I do offend or trigger someone, I don’t see that as much of a problem as many others would. I get offended by things all the time, but I would not dream of having them discouraged, least of all banned. One side of this is protecting victims. And that of course is important, that may not have come across but it is still something I value. However, I value freedom of speech far more.

“Comedians have long made jokes about serious subjects, 9/11, rape, paedophilia and many others. I am not currently convinced that there should be any form of comedy that should be banned or not allowed.

“I’d like to also make clear that I have a very open mind and, if given a convincing argument, would definitely change my mind. But what I have said is my opinion as of now and until it is convincingly changed. I would like to make clear also that to all that will listen, if you want someone to stop doing a certain thing, convince them why with reason and show them why you are right in your view. Banning and shunning the opinions of those you disagree with is not the right way to go about anything, no matter how passionate you are about the subject. Violence and ostracism only leads to more violence and ostracism.

“I do not think rape culture is a thing. I can safely say that the vast majority of men think rape is an abhorrent abuse of another human being (I agree with this fully). I don’t think joking about rape normalises rape anymore than a joke about Trump makes someone more or less likely to vote trump. It is, as the cliché goes, just a joke. So to summarise that, rape culture does not exist, rape itself exists but there is not a culture around it or supporting it. Nor does a joke about rape normalise rape.”

Lancaster Survivors on the harmfulness of rape jokes

The Tab Lancaster contacted Lancaster Survivors, an Instagram page which empowers and supports survivors of sexual assault, to discuss the harmfulness of rape jokes and how triggering they can be.

Lancaster Survivors said: “Rape jokes are incredibly harmful to society as they contribute to rape culture and normalise behaviours that should not be normalised. They reinforce the element of shame that so many survivors suffer with, as they prevent survivors from coming forward for fear that they will be mocked, trivialised, or blamed.”

They further explained that the majority of society are vulnerable to sexual violence, therefore in a patriarchal society, these rape jokes don’t act as jokes but present a reality for many people. Lancaster Survivors said: “When a man makes a joke about a woman being raped, it cannot be a “joke” because it is a reality, making it almost like an invitation for male sexual violence against women.

“Several studies have proven that predispositions towards rape are enhanced by hearing rape jokes. Humour does not exist in isolation from its cultural context, meaning you cannot separate rape jokes from the reality of being raped.” 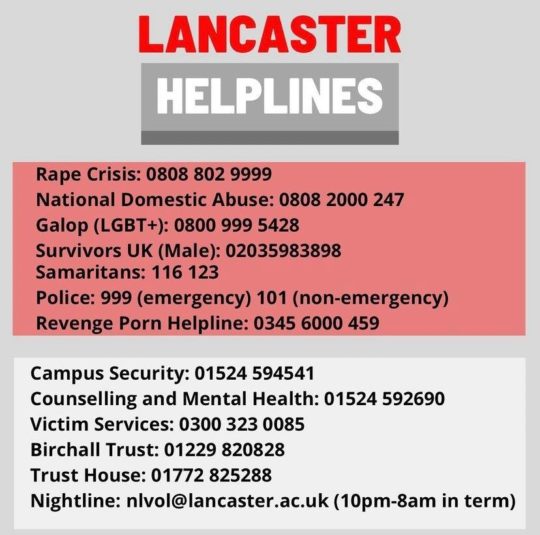 Lancaster Survivors also said that hearing rape jokes can be incredibly triggering for survivors as it can bring back painful memories and can trivialise the trauma they experienced. They said: “To see anyone making fun of something that has hurt you so much can cause severe pain, even leading to panic attacks or coping mechanisms that physically harm the survivor.”

It is extremely important for people to be educated and to spread the message of the inappropriateness of rape jokes of any kind. Lancaster Survivors said: “If a person is educated, they are more likely to correct their own behaviour and hopefully the behaviour of others if they witness it. We each have a responsibility to educate ourselves on such issues and the information is readily available if we look for it.

“You should always pick your friends up on any rape joke they may make, letting them know that what they said was inappropriate, not funny, and explaining why it is harmful to say. Regardless of how close you are to the individual, it is best to approach it from an educating stance as they will be more likely to take on board what you are saying and actually re-evaluate their own behaviour.”

White Ribbon UK is a charity that strive to educate men and boys on their behaviour and actions, with the aim of ending male violence against women, you can find their website here.

You can find more information and support here and here.