Over the weekend Penfession, a Penryn-based confessions page, published a post in which someone admitted to sexual assault and seemed to ask for advice on what to do next.

The post said: “I sexually assaulted someone and I feel awful for it. She doesn’t have the courage to report me. Should I hand myself in to the police? I’m sure eventually I’ll be in trouble for it.”

The post has since been removed, and the admins have apologised “if we offended anyone”.

When the post was up, it understandably received a lot of backlash in the comments, with one saying: “That’s outrageous. Unforgiveable act in my opinion report yourself.” Another commented: “You should feel awful. Turn yourself in, she’ll feel much more in peace knowing you’re going to receive the justice you deserve.”

There were also a number of follow up posts on Penfession questioning why the group admins had allowed the post such a potentially triggering post to appear on their page with no warning. One called the original poster a “scumbag,” with another saying: “You’ve crossed a major line you prick.” 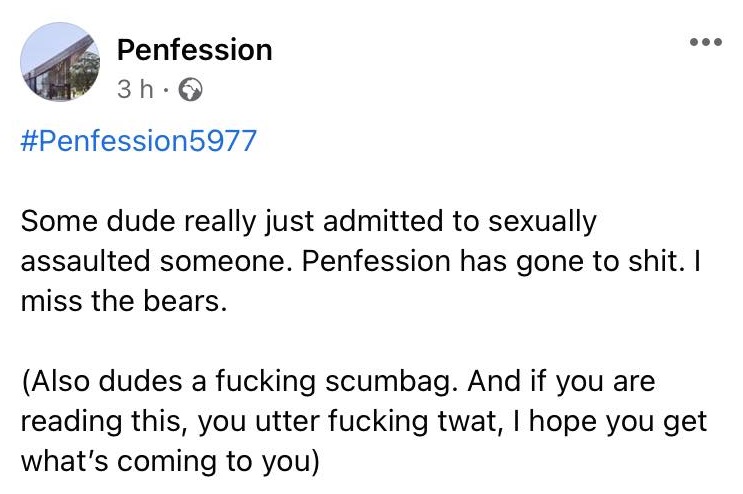 One recent graduate spoke to the Tab Exeter, saying: “I’m shocked that it was approved initially. I was so angry reading it. Not only is the guy trying to get sympathy for it but he’s bashing the victim at the same time. Disgusting.

“It is literally a post written by someone who has sexually assaulted someone looking for sympathy and advice. Not only that but they also call out the victim of said assault as not being strong enough to report them, placing blame on the victim. 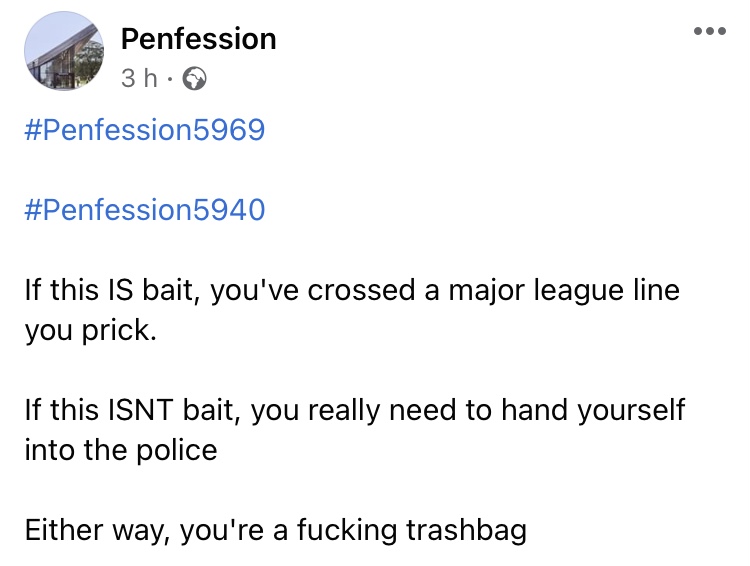 The Penfession admins later apologised for the initial post, saying: “We’ve literally just taken the page over so still very much learning the ropes. We will 10000% do that next time, and are super sorry if that post cause any harm.

“Just trying our best! Obviously we don’t condone sexual abuse and if anyone is struggling with it, please try and talk to someone. Look after yourselves and sorry again if we offended anyone.” 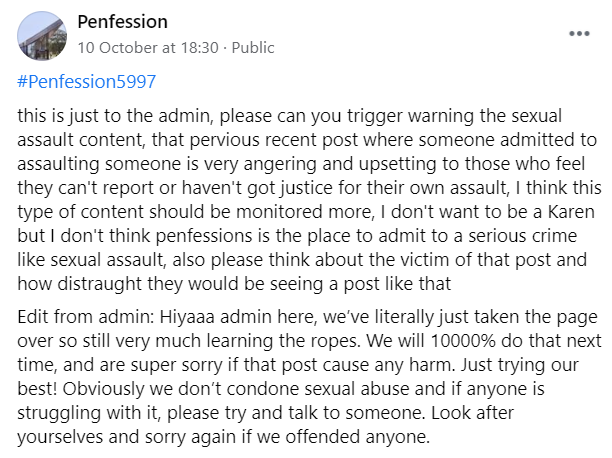 In response to this event, the Falmouth and Exeter Students Union told the Exeter Tab: “The Students’ Union does not monitor or get involved with what is posted on Penfession and other anonymous posting sites.

“That said, we feel this kind of post is inappropriate and triggering, and appreciate that the admin has since responded and removed the post. We hope that victims of sexual assault understand that it is completely safe and within their rights to report incidents.

“We would like to remind students about the support available to them on campus via Student Support Services.”

The Exeter Tab has contacted Penfession, Exeter University and Falmouth University for comment.

Featured image (before edits) via Bia Andrade on Unsplash