She also caused a US military investigation

Jess Davies is a third year Sociology student at University of South Wales. But she’s also a glamour model, having graced the pages of Nuts, Zoo, FHM and The Sun.

Just weeks ago the Welsh beauty made headlines when she found herself tangled in an investigation after shooting a saucy calendar at a US military base.

Now, speaking exclusively to The Tab, the ex-Revs barmaid tells us how she was asked out by Dapper Laughs and that she still can’t get enough of Glam.

Cardiff students aren’t the only ones to snub comedian Dapper Laughs – Jess turned the “proper moist” star down when they were working on a show together.

She said: “Dapper Laughs asked me out when I was working with him on Take it to the Base and we joke about it on Twitter now.”

“I always wanted to get into modelling and coming to Cardiff enabled me to do that” she said. “Travel from Cardiff to London is so much easier than Aberystwyth.”

Anyone who has travelled north of Gabalfa can relate –  using Welsh travel infrastructure is harder than pulling an invigilator in the exam hall.

“Sometimes it’s difficult to balance modelling and uni,” Jess admits. “One week you could have no work and the next you’ll be doing three or four shoots and it can get in the way of uni.”

Jess has a soft spot for Cardiff, and not just because it was the gateway to her modelling career: “I love Cardiff. Coming from Aberystwyth it’s not too big – one stop on the tube in London and you would’ve gone across Cardiff city centre.”

And what of our great city’s plethora of alcohol vendors? “I love going to Revs, always on a Wednesday (sorry Sync). I used to work behind the bar there before I got into modelling.”

“Glam too, although you would think the smell in the VIP would have gone after the refurb, and it’s still like partying in a box.”

The penchant for partying runs through to Jess’ work as well. “I was doing an audition and opted to go last so as to leave a lasting impression. We were all drinking throughout the day and I was pretty drunk when it came to my slot – which involved posing with two guns.”

But the unorthodox “get merry and point guns at people” strategy worked a treat, and landed Jess a spot on the Hot Shots Calendar 2015.

“It seems like a great idea until you’re outdoors wearing just a bikini, it’s cold in Salt Lake City. Well up until a bullet cartridge gets down the back of your bikini bottoms, I’ve got a scar now!”

The calendar shoot took place on a National Guard base and ended up sparking an investigation by the US military: “It was on Good Morning America and caused quite a stir, apparently some higher ups weren’t asked for permission.

“It’s worked out okay though, all publicity is good publicity, the behind the scenes video is on 800,000 views, the calendars have been selling really well and it’s for a great cause – the proceeds are going toward injured British and American veterans.”

What’s next for the Welsh beauty? “I’m branching out. I have a cameo in Example’s upcoming film, The Boy with a Thorn in his Side.”

“I’m heading out to LA for a couple of months when I graduate.” 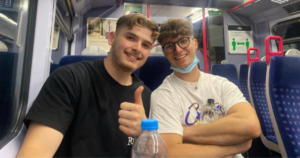 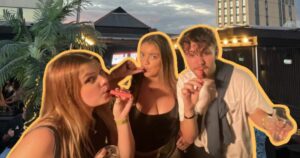 A definitive ranking of the best nightclub smoking areas in Cardiff 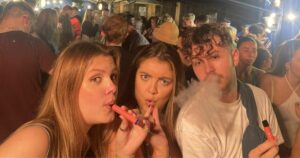 This is what you’re like on a night out, based on your favourite Cardiff club 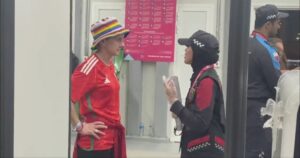