Statements from student protesters allege that an attendee ‘[punched] one of the male protesters in the neck unprovoked, then [pushed] a female protester against a wall’

Several anonymous student protesters have released statements exclusively to The Tab detailing an alleged assault on student protesters by an attendant at the talk held by anti-feminist group J4MB (Justice 4 Men and Boys) on May 24th.

An attendee of the protest send The Tab the following video:

The three statements include first-hand student accounts of the alleged assault, with the third containing details of protesters giving accounts to police and CUSU. 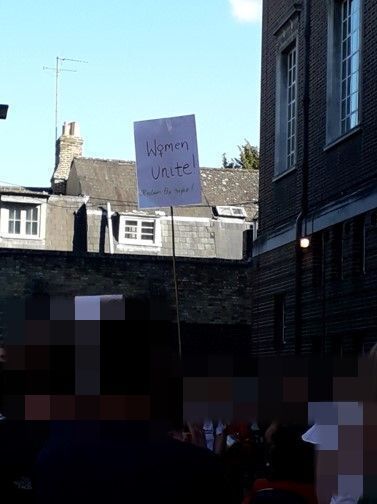 The first student alleges that the protest was peaceful until J4MB members began interacting with the crowds, against what the university security had told them to. The student told The Cambridge Tab: "The protest itself was entirely peaceful, but after the protest uni security told the attendees to exit round the back and directed them away from protesters. Several of the J4MB members disobeyed this instruction to approach the protest and confront the crowd. The security stood back and chatted, unconcerned as this was happening.

"[A talk attendee] came into the crowd and started to shout, he was stood right in front of me and I saw him punch one of the male protesters in the neck unprovoked, then push a female protester against a wall. Security did not intervene and another protester had to pull him away and stop him hurting any more people."

The student "was incredibly scared by him and had a friend walk me home immediately as it was obvious the proctors and security were still not helping."

The student also expressed dissatisfaction with the university's handling of the situation. "Two weeks on, there has still not been an adequate response from the university or apology, and I feel uncomfortable that this violence was allowed to happen, especially as they were warned of the risks of allowing J4MB onto our campus."

The statement from the second student corroborates this account of events, adding that they also saw violent behaviour at the protest. They said: " I witnessed the highly aggressive behaviour of those present associated with J4MB before the event, and the ultimate escalation of this into physical violence as they left."

They continued: "One man, prevented from entering the building by our presence, tried to physically force his way through the student protesters, making physical contact with the student next to me. Her repeatedly telling him 'you can't touch us, you aren't allowed to touch us', and me shouting 'get off her' did not deter him. Only university security reiterating the fact that it was not permitted for him to be making physical contact with students made him desist."

The student told The Tab other J4MB members made made verbal threats.

The student also alleges that "the man in the pink shirt", who the first student observed "punching" and "pushing [students] against a wall", initiated "physical assault on multiple students which he proceeded to perpetrate by suddenly veering off course from where he was walking past us." The student "saw a violent scuffle and then, once the man in the pink shirt was being restrained, realised that a number of students had been hurt by him."

The second student again calls out the university for their poor handling of the situation, writing that they are "appalled by these representatives of the university's inadequate response to the events which had just led to their students being made to feel unsafe, intimidated, threatened, and ultimately physically hurt. The response of the university to their own failure to ensure student safety remains inadequate and disappointing."

Whilst "shocking" to see the violence unfold, the student further criticises the university, stating that "it was not unexpected and was frankly a predictable outcome of our university being rendered a profoundly unsafe space for the students and staff who live and work here", reiterating that "our concerns about the wellbeing and safety of students and staff, which had been repeatedly raised prior to the J4MB event being hosted by the university, proved absolutely founded." 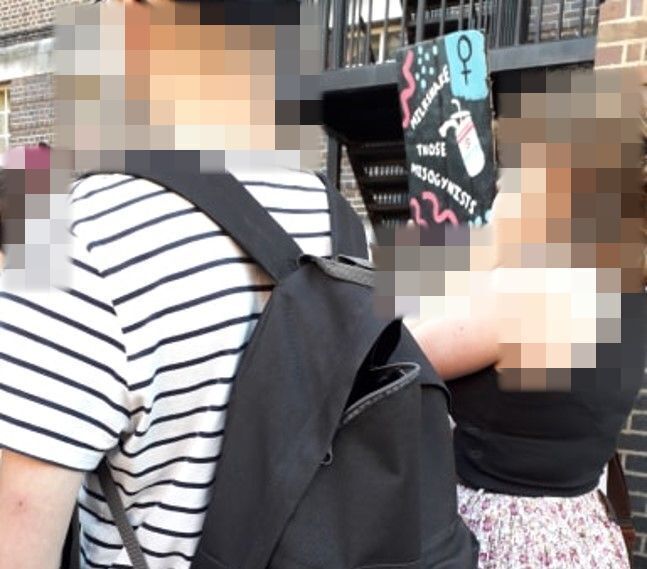 The third statement reiterates these claims, writing that "despite" talk attendees being told to leave through a "back entrance" to avoid coming into contact with the protesters, "some of the attendees decided to leave the event through the area where the protesters were standing."

The third student told The Cambridge Tab: "I was stood outside the gate clapping at attendees as they left, when I saw there was a commotion further up towards the back left of the site. Unprovoked – as later confirmed by the university proctors who had been present to a gathering of upset students in CUSU later that evening – they were shoving/spitting on students. I did not know this at the time, I only saw some form of commotion and these events were relayed to me later."

This student also observed the "man in a pink shirt grabbing at people in a crowd nearby who were protesting."

"He seemed to be hitting at people around him. I saw him swing for a man, and then grab a girl who was close towards me – neither of us were in ‘the crowd’, we were further off and could not possibly be seen as intimidating’ – and he threw her into a wall with no possible provocation.

"A group of male protesters then tried to restrain the man to prevent him from further violence i.e. me as I was next ‘in line’. This was done to protect students and so we could contact the police with regards to the obvious assaults. He violently ripped his way through these men and another attendee grabbed him and walked away with him.

"I screamed for help from security – very shaken up – and followed the pink man, demanding he stopped because he had just attacked a girl. They swore at me and continued on. I ran to grab security and tell them what happened. They were unhelpful when I asked them to call the police, suggesting I did so as a private citizen.

"I had to scream and beg to get them to follow the man in pink as they seemed to have no intention of doing so, which was very upsetting. Eventually they agreed to follow and ask him to stay until the police arrived whilst a few of us students phoned the police."

After the event, protesters "went to CUSU where we made sure everyone was okay, and to which the police attended, interviewing students who had been assaulted as well as witnesses – including me. I gave this full account to the police".

"Later, the there proctors who had been at the event came and confirmed that the attendees had intentionally broken away from the path they were instructed to follow out of the event purely to harass us, and that they had clearly been the aggressors in the incident."

"The CUSU Sabbs contacted the university, most importantly Graham Virgo [Senior Pro-Vice-Chancellor for Education] – about the incident. Graham informed them that the issue would be discussed at the Prevent committee (the committee which allowed the event to go ahead) but as of writing has made no attempts to reach out to students affected despite multiple requests from various Sabbs.

"Students who reached out to Graham Virgo were told to go through CUSU, despite the fact that he was doing little to assuage their concerns. The university have also failed to update the senior tutors of the students' affected on the issue.

"It was also requested that the university support the police investigation initiated by students and which is still ongoing and still in contact with some of us. Students who were attacked deserve support, as do those who were traumatised by the violent scary situation. I and other students are very upset both with the event happening in the first place despite our concerns, and the Uni’s failure to check up on its own students’ welfare after they were attacked by outside visitors on campus."

In light of these accounts, CUSU and GU have also called for greater university support of the students involved, as well as condemning the university's decision to host the group in the first place.

In a statement given to the Tab, CUSU and GU write that "the events of Friday 24th prove that [students and staff] were right" in "[raising] concerns that the presence of group ‘Justice for Men & Boys’ in the university was a threat to the safety of members of the university."

They corroborate the allegations made in the numerous student accounts, claiming that "a number of J4MB supporters actively contravened security's instructions to exit the event at a distance from the students outside, instead aggressively confronting those students, and ultimately a number of peaceful student protesters were physically assaulted by an attendee of the J4MB event.

"CUSU and the GU are doing what we can to support students who were put in danger while exercising their right to protest, but the university needs to act to support those students, to explain why students were not listened to before the event, and to make sure this does not happen again. The pattern of right wing groups gaining publicity by attacking Cambridge students is a serious problem for the university and they must tackle it head on."

J4MB have previously responded to the allegations of assault, brought to their attention by Varsity.

In an email response to Varsity published on their blog, they strongly deny the accusations, describing the claims as "a continuation of the lies and misrepresentations made against J4MB"/

A Cambridge University spokesperson commented: "We are aware of an incident and we understand the police are looking into it. The university does not condone any act of aggression or violence.”