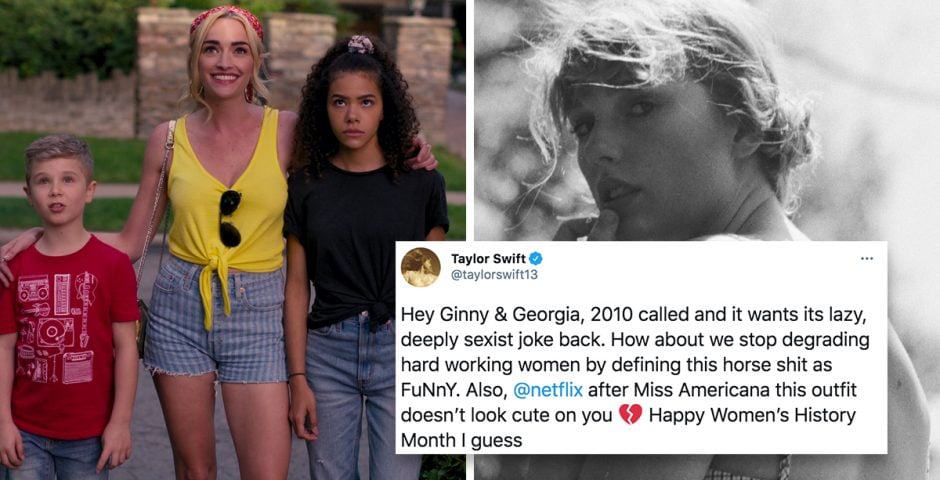 The show made a dig at her, and she’s not having it

The actual Taylor Swift has completely dragged new series Ginny and Georgia on Netflix, calling it “lazy” and “deeply sexist”.

In the final episode of the series, Ginny Miller (Antonia Gentry) and her mother Georgia (Brianne Howey) are arguing about her relationships. When Georgia assumes Ginny and her boyfriend Hunter have broken up, Ginny shouts back: “What do you care? You go through men faster than Taylor Swift.”

And, rightly so, Taylor Swift is not happy. She tweeted saying: “Hey Ginny & Georgia, 2010 called and it wants its lazy, deeply sexist joke back. How about we stop degrading hard working women by defining this horse shit as FuNnY. Also, @netflix after Miss Americana this outfit doesn’t look cute on you. Happy Women’s History Month I guess.” Damn.

Hey Ginny & Georgia, 2010 called and it wants its lazy, deeply sexist joke back. How about we stop degrading hard working women by defining this horse shit as FuNnY. Also, @netflix after Miss Americana this outfit doesn’t look cute on you 💔 Happy Women’s History Month I guess pic.twitter.com/2X0jEOXIWp

Within minutes the tweet has had tens of thousands of retweets.

Ginny and Georgia follows the mother and daughter duo as they move to a new city to start a fresh. Throughout the series, teenage daughter Ginny makes multiple comments about how she struggles with relationships and friendships, and feels her mother Georgia has always been a “natural” at these sorts of things.

Before Taylor’s tweet, her fans had taken to Twitter to back her up. People were tweeting about the scene, and demanding everyone “respect Taylor Swift”. This even began trending on Twitter.

THIS is how you talk about Taylor Swift on television. pic.twitter.com/h9jMQTJmrK

Taylor Swift’s documentary “Miss Americana” only premiered on Netflix just over a year ago. In a previous interview she has spoken out about how female and male artists who write about their relationships are treated very differently and that nobody really points out when men sing about their ex-partners. She said: “No-one says that about Ed Sheeran. No-one says that about Bruno Mars. Frankly, that is a very sexist angle to take.”

Ginny and Georgia is available on Netflix now. For all the latest Netflix news, drops, quizzes and memes like The Holy Church of Netflix on Facebook.