These are the hilarious memes and tweets that destroyed Fyre Festival

There’s no coming back from this

Right now, everyone is talking about Fyre Festival – the luxury music event that never happened. But cast your mind back to 2017, when the festival was actually happening – or not happening, as attendees soon found out. Twitter went into meltdown, with people living to destroy the "rich kids" of Fyre Fest. People were posting memes non stop as the chaos unfolded. This formed its own section on the internet. Introducing: Fyre Festival memes. They were everywhere.

Marc Weinstein, the music festival consultant featured on the Netflix doc about the event, said: "All I know is that people were stocked to watch this thing come down". Fyre Festival was meant to be the biggest event of the decade. A luxury festival in the Bahamas promoted by the likes of Kendall Jenner, Bella Hadid and other Instagram influencers. And when this didn't happen, people on the internet kicked back, and went IN.

These are the best memes, tweets and viral threads that came out during Fyre Festival, and in the aftermath.

The cheese sandwich tweet that took down the festival in one

Everyone talks about *that* cheese and bread picture from Fyre Festival. It completely sums up the lies that were sold to the attendees. They were promised luxury catering, and when they arrived they were actually served this:

The dinner that @fyrefestival promised us was catered by Steven Starr is literally bread, cheese, and salad with dressing. #fyrefestival pic.twitter.com/I8d0UlSNbd

In the Netflix documentary, Mick Purzycki, CEO of Jerry Media, said: "A couple of powerful models posting an orange tile is essentially what built this entire festival, and then a kid with probably 400 followers posted a picture of cheese on toast that trended and effectively ripped down the festival."

Some of the memes that went viral during the chaos of the festival were shown in the Netflix documentary: 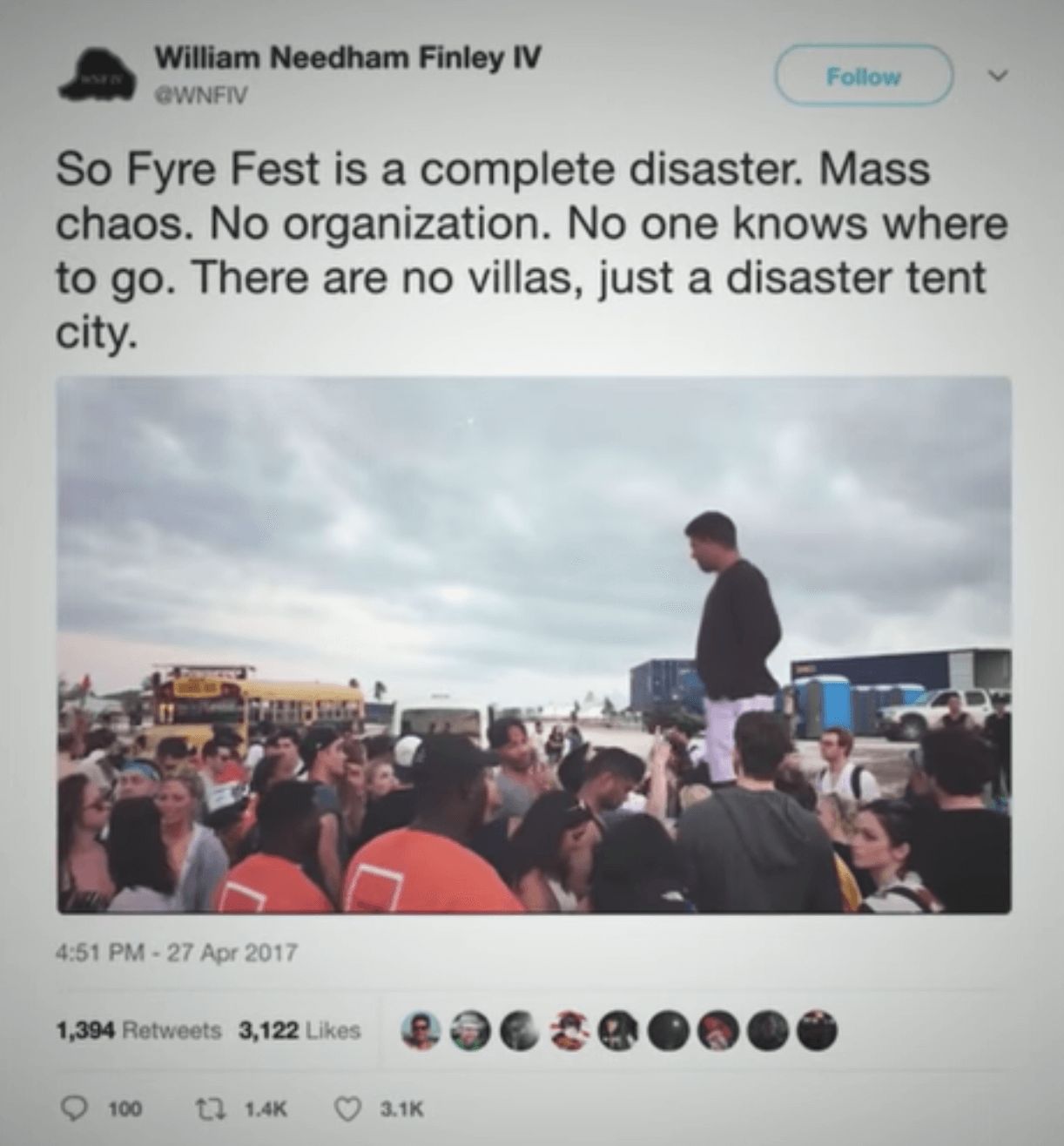 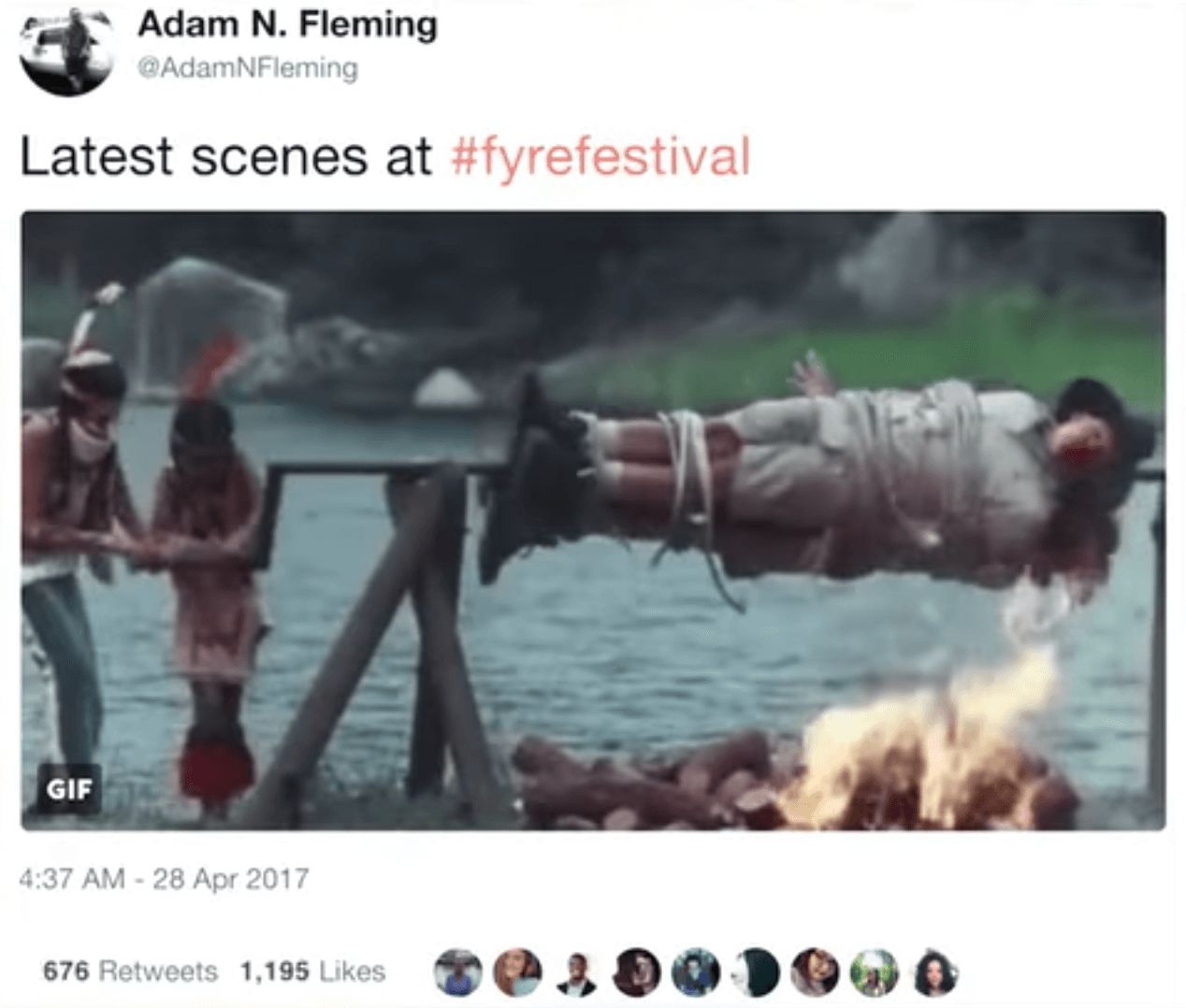 Me going through the #FyreFestival tag. pic.twitter.com/WdM1Qq9kDx

this is my favorite interaction i've ever seen #FyreFestival pic.twitter.com/ihEO1HccAe

William Needham Finley IV's tweets feature heavily in the Netflix show. His tweets are used as an example of how Twitter completely took down Fyre Festival instantly. Last year, he made a thread recapping all the tweets as a journey through the festival grounds when he arrived. He says: "I was just a blogger/media empire founder trying to go on vacation and satirize the influencer culture at the same time. The main reason I was there was for the million dollar treasure hunt."

In a lot of his videos you can hear the pounding background music. In the Netflix doc it was said that Billy McFarland had demanded music was blasted, in a way to distract festival attendees and build some sort of atmosphere over the carnage that was unfolding. This is the tweet thread:

This Fyre Festival™ recap is brought to you by @DumpsterFyrePod (coming soon). Also, I bought the Fyre Festival™ trademark and am now planning my own festival. I promise not to do any fraud or leave you stranded on an island. It’s gonna be lit!https://t.co/zoZ3hERjHc

The first luxury tent we found. I believe the rug was Persian. The people who were assigned the tent showed up and we left. #fyrefestival pic.twitter.com/4nPCx1OzZ0

"After being kicked out of the first tent, we went back to Billy. I think this is where he really showed his leadership skills"

Here's Billy standing on a table. At the time, Billy had the conch and all the power. That would quickly change. #fyrefestival pic.twitter.com/0mBO4JbfFR

"We found another tent. Two friends stayed back to guard it while my other friend and I searched for our luggage. That's when we came upon the luxury baggage carousel."

This is how Fyre Fest handles luggage. Just drop it out of a shipping container. At night. With no lights. #fyrefestival pic.twitter.com/X5CdZRyJWo

I helped unload a pickup truck full of luggage and just happened to find my bag. A true Fyre Festival™️ miracle. pic.twitter.com/RBcnFm2HVr

"While exploring, I discovered the secure lockers. I'd make a joke like 'at least they kept our personal data safe' but months later our emails/contact info were sold (allegedly)."

These are the secure lockers at Fyre Fest. They forgot to tell us we needed locks. #fyrefestival #fyrefest pic.twitter.com/Tqyjqbg2Gy

Billy eventually got off the table and joined the crowd to be one with the guests. This is where he lost the conch. #fyrefestival pic.twitter.com/CjxlAUnrIr

Also, we found a notebook from one of the Fyre Fest planners on the ground. It is amazing. #fyrefestival #fyre pic.twitter.com/jFib0nO2RW

The luxury stage was so lit. Sadly, there was no beer at the luxury bar. They didn't run out. They never had any to begin with #fyrefestival pic.twitter.com/lJzHX1WuTV

"However, the food court was a bit underwhelming."

A view of the luxury food court with some luxury school bus transportation at Fyre Festival. #fyre #fyrefestival pic.twitter.com/XL3PtRw8q0

Luxury trash receptacles at the luxury bar (with no beer). No shoes, no shirt, pajama pants, no problem. #fyrefestival #fyre pic.twitter.com/PojJtfHlqL

Boarding the "private" plane back to Miami. Fyre Fest gets 0/5 beltlines. They'll be hearing from Stacy @MillerLawFirmNC #fyrefestival pic.twitter.com/pFLSWEwenV

Fyre Festival™ sent us an e-mail at 2:29 AM that I got while sitting on the plane. It began "Things got off to an unexpected start at day one of Fyre Festival". They still thought they could pull it off at this point. pic.twitter.com/lZqIyXLf7g

The reactions to the documentary have been pretty wild too

“It’s so stressful to decide which Fyre doc to watch. I won’t watch more than one.”

“I could watch infinite Fyre docs until the day I die.”

me on the first date pic.twitter.com/I7X6p1oHeS

Since the doc, Ja Rule has tweeted about how he was scammed as well, and that has become a meme in itself

I too was hustled, scammed, bamboozled, hood winked, lead astray!!!

How I feel paying student loans every month https://t.co/rw4Z03N1ic

when i wake up with a hangover and watch last night's ig story https://t.co/BlveJtEnVD

Theresa May to her cabinet, backbenches, Parliament and the European Union: https://t.co/hgBPZlt8Mc

me when a skincare product does not automatically give me clear skin https://t.co/6Himlr12k5

• The hot boys of Fyre Festival: The only good thing to come out of it all